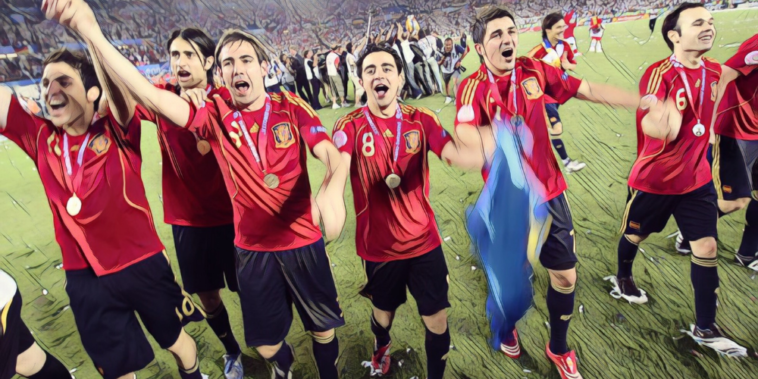 For so long, Spain were one of international football’s great underachievers.

England’s 55 ‘years of hurt’ and counting is well-documented and always circulated around the time of major tournaments, but Spanish football found itself in a similar situation towards the late 2000s, a nation boasting a wealth of talent and one of world football’s best domestic leagues unable to translate that success to the international stage.

Since winning the European Championship in 1968, there had been just one more major final appearance as La Roja finished as runners-up in the same competition 16 years later, failing to progress beyond the quarter-finals in any of the following 10 tournaments they qualified for after 1984.

That would all change however, as Spain began a tactical revolution that would lead to an unprecedented period of international success.

The process began following Luis Aragones’ appointment following a humiliating Euro 2004 exit, the experienced coach guiding Spain to the World Cup in 2006, where despite a strong group stage campaign they exited in the last-16 to eventual finalists France.

Following the tournament in Germany, Aragones implemented the changes that would change the course of Spanish football’s history forever.

Experienced stars were discarded from his plans with David Albelda, Michel Salgado and, most notably, Raul removed from the equation.

Raul’s departure was a huge talking point, the captain of the national side and Real Madrid icon, a player who had scored more goals for Spain than any other player in history.

It was symbolic, decisive, but ultimately successful.

Replacing those names was a contingent of brilliant yet diminutive midfield players, the side built around the technical talents of Xavi Hernandez and Andres Iniesta with the Barcelona duo’s supporting cast including the emerging David Silva, Cesc Fabregas and Santi Cazorla.

Spain’s football had previously been prided on a furious high-tempo intensity, but the nation’s La Furia Roja (The Red Fury) moniker was in the midst of a transformation, with the focus now on precise passing and possession as tiki-taka was introduced to the world.

Spain’s campaign got off to a blistering start as Russia were thrashed 4-1 in their opening group game, David Villa scoring a hat-trick as Aragones’ side dismantled their opponents in Innsbruck.

The passing and finishing for these goals 🤤🤪

Another late winner, this time from Mallorca forward Dani Guiza, saw a rotated side come from behind to beat Greece and progress to the knockout rounds with a flawless record. Spain, of course, had been here before.

Italy represented the first real test of the Spaniard’s credentials in the quarter-finals and it proved a dour encounter, the pragmatism of the Azzurri holding up in opposition to Spain’s patient passing approach.

After 120 goalless minutes the tie would be decided via penalties, the lottery of the shoot-out this time favouring Spain as lady luck decided on a change of fortune for La Roja, who had incredibly exited three previous major tournaments on June 22 at the quarter-final stage – all on penalties.

The semi-finals brought a rematch with Russia, who had bounced back from their opening game thrashing to emerge as one of the most exciting teams at the tournament with Andrei Arshavin the architect of a brilliant quarter-final win over the Netherlands.

Spain however, produced a superb display to move into their first major final for 24 years, an outstanding performance that saw Cesc Fabregas star after coming off the bench to replace the injured Villa.

Goals from Xavi, Guiza and Silva ensured a 3-0 win and final showdown with the Germans in Vienna.

The two tales of the nations could hardly have been more different heading into the clash, Germany perennial contenders for major tournaments and often finding a way to win, whilst Spain took to Europe’s biggest stage under the weight of decades of underachievement.

Villa’s injury meant the tournament’s leading scorer was left on the substitutes bench with Aragones reverting to a five-man midfield, Fabregas returning to the side as Spain sought history.

Spain began nervously as Germany pressed high, before settling into the rhythm that had seen them conquer opponents by passing them off Austrian pitches with suffocating possession at Euro 2008.

The match-winning moment came just after the half hour, with Xavi – named as the tournament’s finest player – dissecting the German defence with a weighted pass in behind for the scampering Torres.

Torres’ speed and strength saw him overpower Phillip Lahm before lifting a fine finish over Jens Lehmann, a goal that would be replayed countless times as Spain were crowned champions of Europe to spark wild celebrations on the Iberian Peninsula.

Spain’s success was a triumph for the collective and for brain over brawn, their carousel of possession outclassing teams throughout the tournament as tiki-taka reigned supreme.

Xavi’s metronomic midfield play proved symbolic of his side’s change in style and fortunes, whilst Andres Iniesta glided across the grass pitches as opposing sides were left chasing Spanish shadows.

It proved the turning point for what proved to be an unprecedented period of success, the World Cup won two years later before an incredible third major tournament in succession headed to Spain following Euro 2012.

Those following tournaments perhaps saw Spain reach their true zenith, but the principles that changed the nation’s history were still in full evidence during the summer of 2008 as La Roja’s mastering of midfield angles and overloads ensured domination.

The methods first honed at Barcelona had been transferred onto the international stage as fury was replaced by finesse, Spain’s evolution from raging bull to matador complete as both the ball and opponents were manipulated by their array of midfield geniuses.