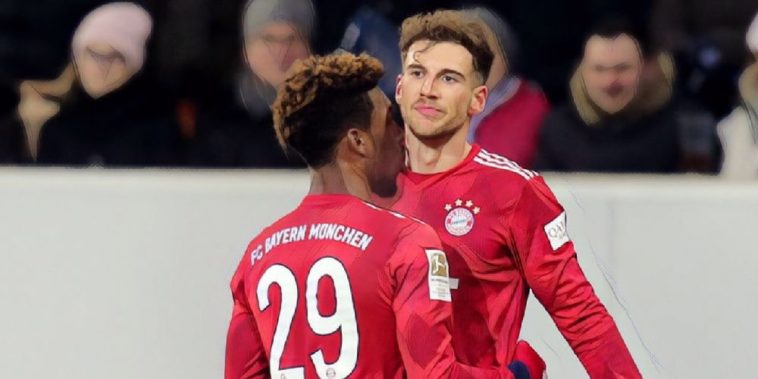 Bayern Munich are remaining ‘optimistic’ over the futures of Kingsley Coman and Leon Goretzka, with both men having linked with a move to the Premier League.

Coman, in particular, is facing an uncertain future at the Allianz Arena, having failed to commit to a new deal at the club, his current contract set to expire in the summer of 2023.

That scenario has alerted a number of Premier League sides, with Liverpool having been heavily linked with a move in recent weeks, while Manchester United were previously said to be interested in the 25-year-old.

The winger has been in impressive form for the Bundesliga side in recent years and netted the winning goal in their Champions League triumph in 2020, while he also has the distinction of having won a domestic title in every one of his senior seasons, having previously turned out for both Paris Saint-Germain and Juventus.

As for teammate Goretzka, the Germany international has developed into a real powerhouse midfielder over the last 18 months or so and has played a key part in the club’s success under Hansi Flick in recent seasons.

Amid uncertainty over the future of Paul Pogba, Ole Gunnar Solskjaer’s have emerged as a potential suitor for the 26-year-old, whose current deal is set to expire in 2022.

Despite speculation about both players, new Bayern CEO Oliver Kahn has revealed that the club are ‘optimistic’ about tieing them down to new deals, although he insisted the club won’t be held to ransom over wage demands.

“We’re in talks with Goretzka and Coman,” Kahn told a press conference. “Absolute top players want to be paid accordingly, we’re not naive about that. That’s perfectly fine. With us, there is a limit, which is very clearly defined.

“With [David] Alaba, you saw that at a certain point, we were no longer willing to go further. We don’t push into salary regions that don’t suit FC Bayern.

“We are in very, very good talks with both players. I am optimistic. We have a great package to offer here. They always have the chance to win big titles with us and can help shape an era.”