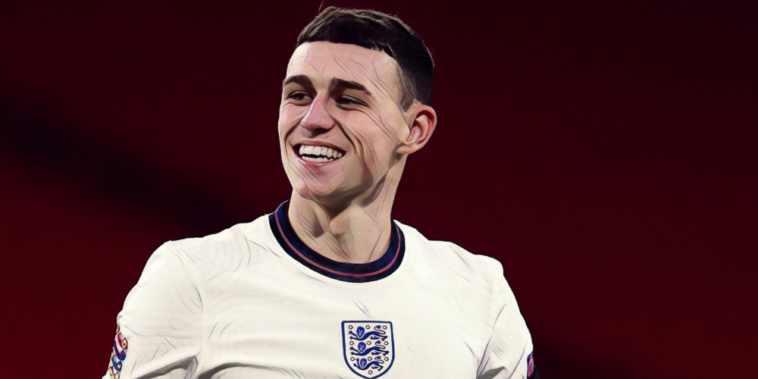 European football’s leading nations are currently undergoing their final preparations ahead of Euro 2020, the rescheduled tournament set to get underway from June 11.

The finals will feature a whole host of the biggest stars in world football, each seeking to make an impression on a major tournament and bring success to their respective nations.

Amongst a collection of superstar names will be a some of football’s rising stars and ahead of this summer’s European Championship we’ve decided to look at some of the emerging names who could shine.

Here are five rising stars who could light up this summer’s Euros.

England will begin the tournament amongst the favourites to win the trophy with Gareth Southgate possessing an embarrassment of attacking riches – an emerging crop of footballers have raised hopes that the Three Lions can end their 55-year wait for major tournament success.

Headlining an exciting contingent featuring players such as Jadon Sancho and Mason Mount is Manchester City midfielder Phil Foden, who has taken huge strides forward at club level this season to earn his place in England’s 26-man squad.

Foden was named as Player of the Tournament after helping England’s U17 side to World Cup success four years ago, and is now preparing for his first competition with the seniors after being handed his debut in September.

The 21-year-old has since scored twice in six appearances at international level, netting a double in November’s Nations League win over Iceland.

Foden’s potential has been well-documented in recent years and this season has shown him step up to a more prominent role at club level, finding himself ahead of club teammate Raheem Sterling in the pecking order under Pep Guardiola at the Etihad.

The Man City man possesses the close control, balance and elegant technical talents that English players have often been accused of lacking and his invention could prove crucial in the latter stages of a major tournament.

Named on the shortlist for the PFA Player of the Year award following a campaign that has delivered 16 goals in all competitions, Foden could be about to explode in an England shirt this summer.

Foden could well have been lining up alongside Jamal Musiala this summer, though a tug-of-war between England and Germany saw the latter emerge triumphant to secure the midfielder’s future.

Musiala has represented England at various age groups, though will form part of Germany’s travelling squad after impressing since making his senior debut during March’s World Cup qualifiers.

The 18-year-old became the youngest ever league debutant for Bayern Munich last term before enjoying an excellent breakthrough season in 2020/21, scoring seven goals across all competitions to help the Bavarians to the Bundesliga title.

The teenager is technically gifted and mobile and has thrived in a variety of midfield roles this season, with his best performances arguably coming in an advanced position where he can get forward and join the attack.

Musiala is one of eight Bayern Munich players in Germany’s Euro 2020 squad, where Joachim Löw’s side will face Portugal, France and Hungary in the tournament’s so-called ‘Group of Death’.

Another starlet handed a senior international debut during March’s international break, Barcelona prospect Pedri has made waves following a season brimming with potential at the Camp Nou.

Signed from Las Palmas last summer, the 18-year-old has enjoyed a remarkable first season, handling the step into one of world football’s biggest clubs with seemingly incredible ease.

Pedri has not only shown flashes of his enormous potential, but has controlled games and flourished in a way rarely seen from footballers so raw in their development.

The midfielder has shown no fear of mixing at the highest level, either during Barcelona’s Champions League campaign or when making his senior debut for Spain in testing circumstances against Greece earlier this year.

Pedri is a player who often looks like he’s been schooled in Barcelona’s fabled La Masia academy for a decade, rather than one plucked from a second-tier outfit before becoming a firm favourite of Lionel Messi in Catalonia.

Spain have produced an array of gifted midfielders since the turn of the century and Pedri – based on his current projection – could be the best of the next generation.

Holland are set to return to a major tournament for the first time since the 2014 World Cup this summer, a youthful squad preparing to embark on the finals under Frank de Boer.

The Dutch will be without captain Virgil van Dijk through injury, though have a talented core of young players including Matthijs de Ligt, Frenkie de Jong and Ajax teenager Ryan Gravenberch.

Gravenberch has been discussed as a potential superstar for some time after making his way through the famed academy system in Amsterdam, the 19-year-old having earned comparisons to Paul Pogba for his physique and multi-faceted midfield talents.

Gravenberch has broken into the side on a regular basis this season at club level and helped Ajax to Eredivisie success, scoring three goals and providing five assists in 32 league appearances for the Dutch champions.

Named as Dutch Football’s Talent of the Year for 2020/21, he was named in the national squad for March’s World Cup qualifiers and made his debut against Turkey.

Gravenberch has been linked with a move to the Premier League with Liverpool and Chelsea linked and a strong performance at this summer’s finals could prompt further interest from across Europe.

Signed in a €35m deal from Atalanta last summer, Dejan Kulusevski has been one of the few positives from a disappointing season for Juventus.

The mercurially talented winger was named as Serie A’s best young player during a loan spell at Parma in 2019/20 and has continued his upward curve this season, scoring seven goals across all competitions for the Bianconeri, including an opener against former club Atalanta in the Coppa Italia final.

Kulusevski is comfortable in a number of attacking roles and combines his high work-rate with plenty of creative quality, the 21-year-old having been named as part of Sweden’s squad for this summer’s tournament.

The youngster has won 12 caps since making his debut in 2019 and scored his first international goal during a Nations League clash with Croatia in November.

Zlatan Ibrahimovic’s absence through injury leaves Sweden in need of inspiration as they bid to qualify from a group containing Spain, Poland and Slovakia, Kulusevski a player capable of match-winning moments.