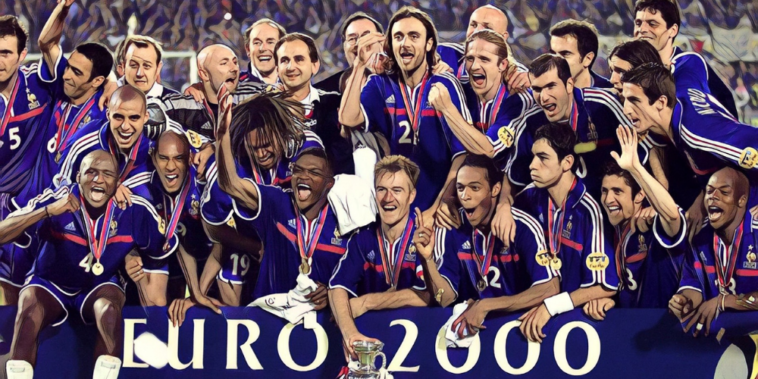 France will head into this summer’s European Championship amongst the favourites to win the tournament, the reigning world champions looking to secure a second successive major tournament.

Didier Deschamps’ side will take inspiration from Les Bleus all-conquering side at the turn of the millennium, a formidable outfit who followed 1998 World Cup success on home soil by being crowned European champions two years later.

We’ve decided to look back at arguably French football’s finest ever vintage, remembering the iconic France side that were won the 2000 European Championship.

Fabien Barthez was France’s undisputed number one at the tournament and named amongst the best shot-stoppers following its conclusion, with the goalkeeper having finalised a move to Manchester United ahead of Euro 2000.

Nicknamed Le Divin Chauve (The Divine Bald One), Barthez often mixed the brilliant with the bizarre with his eccentricity evident during three seasons in the Premier League that delivered two league titles.

One of the best defenders of his generation and France’s all-time record appearance maker, Thuram featured in seven major tournaments for Les Blues including their 1998 and 2000 winning sides.

The former Parma, Juventus and Barcelona player featured at right-back for the 2000 vintage, charging forward to join the attack whilst remaining calm and composed with his defending, as part of a back four that never lost an international fixture when played together.

Thuram briefly retired from international football before being persuaded back into the fold ahead of the 2006 World Cup, where he helped France reach the final before shoot-out defeat to Italy in Berlin.

Marcel Desailly, or The Rock as he came to be known, partnered Blanc at the heart of the defence with his performances crucial to France’s double success.

Desailly started his career as an imposing and athletic box-to-box midfielder and became the first player to win consecutive Champions League trophies with different teams in the nineties, before dropping into his preferred centre-back role in his latter career.

He was named as France captain following Didier Deschamps retirement post-Euro 2000 and later had a six-year spell at Chelsea, acting as a mentor to an emerging John Terry.

Named in the European Championship Team of the Tournament in 1992, 1996 and 2000, the latter edition proved the final swansong for one of France’s great defenders as Blanc called time upon his Les Bleus career following their success.

Blanc scored the opening goal in the group stage victory over Denmark and played a key role in their run to the final, success redemption for the centre-back after he cruelly missed their World Cup final triumph through suspension.

He finished his international career having amassed 97 caps and 16 goals, stepping down for a new generation to emerge with his legacy secured in France’s history-making side.

Part of a strong Bayern Munich side across the turn of the millennium, Lizarazu spent over a decade as the national team’s number one left-back, winning 97 caps and scoring twice.

He started both the final of the 1998 World Cup and Euro 2000, proving a fixture in the side for his consistent displays on the left side of an often impregnable backline.

Vieira was a squad player during France’s victorious World Cup campaign, but two years later had established himself as a key component of Roger Lemerre’s team and one of the best midfielders in the Premier League.

Vieira’s box-to-box brilliance saw him start all six fixtures for France at Euro 2000, his powerful running and drive complimenting the disciplined defending of Deschamps to provide the French with an elite engine room.

His performances saw him named in the Team of the Tournament, whilst he also won three league titles at Arsenal and three Serie A championships at Inter Milan during a distinguished club career.

One of the best defensive midfielders of his time, Deschamps anchored the midfield and stifled opposition attacks with his intelligent positioning and tenacity in the challenge.

He retired from international football following the tournament and later moved into management, taking charge of the France side that won the 2018 World Cup to become just the third man to win the tournament as player and manager.

Deschamps will lead France once again at this summer’s European Championship, looking to secure a unique double.

The best player at Euro 2000 and the finest footballer of his generation, France’s success in the Belgium and Netherlands was arguably Zidane at his playmaking zenith.

Zidane was the shining light in a tournament where mercurial number 10s flourished, inspiring Les Bleus with his balletic brilliance and a sprinkling of genius.

His finest showings came in the knockout stages with effortless performances against Spain and Portugal, netting a fabulous free-kick against the former before a decisive winner from the spot against the Portuguese in the semi-finals.

Throwback to when Zinedine Zidane tore Spain apart at EURO 2000 🔥

His World Cup final winning double may be the defining image of his career, but Euro 2000 was Zidane at his magical and mesmeric best on the international stage.

Selected on the right as France favoured a 4-2-3-1 formation for the final, as opposed to a 4-3-1-2 system that had seen Emmanuel Petit deployed in central midfield.

Djorkaeff’s technical talents saw him him score 28 goals in 82 caps for France at senior level, including a quarter-final winner against Spain at Euro 2000.

The creative midfielder later enjoyed a fruitful two-year spell at Bolton in the Premier League as Sam Allardyce attracted some notable names to the north west to enjoy Indian summers.

Christophe Dugarry started on the opposite flank for France’s victorious side, another player who later enjoyed a brief spell in the Premier League to become a Birmingham City favourite.

Dugarry had struggled despite Les Bleus’ success at the 1998 World Cup, and two years later faced strong competition for places from the likes of Nicolas Anelka, Thierry Henry and David Trezeguet.

He impressed Lemerre by scoring in a group stage dead-rubber against the Netherlands, before being recalled for the semi-final and final as France were crowned champions.

Thierry Henry was trusted as the lead of the French attack ahead of an array of emerging options, scoring three times at Euro 2000 including both of the world champion’s opening two group fixtures.

Henry also netted the equaliser to force extra-time against Portugal in the semi-finals, with only three players outscoring the Arsenal forward at the finals.

Henry arrived into the tournament on the back of a debut season in the Premier League that saw him score 26 goals in all competitions, part of a record-breaking haul of 228 he scored in an Arsenal shirt.

Introduced off the bench to rescue France in the final against Italy, Sylvain Wiltord netted a stoppage-time equaliser to force extra-time and break Azzurri hearts.

Wiltord had broken into the national side following their World Cup triumph, after winning the Ligue 1 Golden Boot whilst at Bordeaux.

He joined Arsenal in a club-record deal following Euro 2000, winning two league titles with the Gunners including scoring a title-clinching goal against Manchester United during the 2001/02 season.

Robert Pires was a squad member of France’s 1998 side, setting up Laurent Blanc for the competition’s first ever Golden Goal in the quarter-finals against Paraguay.

It was a trick the winger repeated on Europe’s biggest stage two years later, as Pires combined with fellow substitute David Trezeguet to assist the forward’s Golden Goal winner in extra-time against Italy.

Pires signed for Arsenal following the tournament as a replacement for the Barcelona-bound Marc Overmars and became one of the Gunners’ greatest ever players over six seasons in north London, winning two league titles and being named as the FWA Footballer of the Year in 2001/02.

David Trezeguet’s Golden Goal winner is etched into European folklore, a sweet strike that crowned France as the continent’s finest and wrote this team into the history books.

Trezeguet had played a bit-part role up until the final, though scored against co-hosts the Netherlands in an entertaining group stage defeat before his defining moment in the Rotterdam final.

David Trezeguet came off the bench to score a golden goal as France became the first world champions to win the following EURO!@equipedefrance | @Trezegoldavid pic.twitter.com/XJ533X1e9l

Pires’ cut back is met emphatically by Trezeguet on his left side, lashing the ball high beyond Francesco Toldo to spark jubilant celebrations from the French players and supporters.