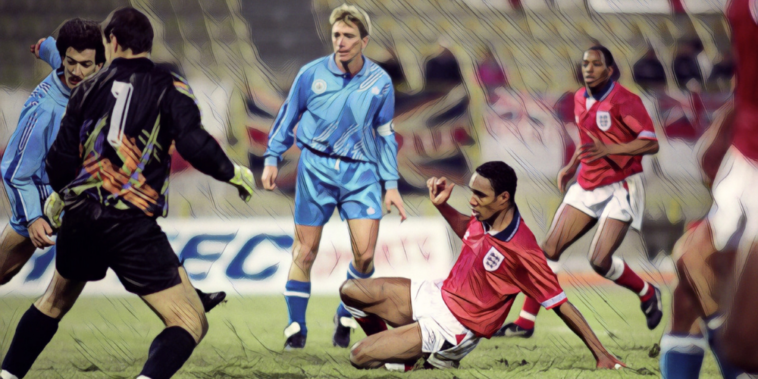 It was the eighth meeting between the Three Lions and one of international football’s most notorious whipping boys, with each having ended in comprehensive scorelines for England.

However, one of the first encounters between England and San Marino saw the Three Lions infamously fail to reach the 1994 World Cup, having narrowly missed out on the seven-goal win needed to finish above Holland in qualification.

San Marino took a shock lead after just 8.33 seconds through Davide Gualtieri, and whilst England roared back to win 7-1 on the night, it was not enough as Graham Taylor’s side missed out on USA ’94.

The England manager resigned six days later, Gualtieri’s goal – the second-fastest ever scored in World Cup qualification – leading to Taylor’s exit from the national side.

We’ve looked back at the England XI from that famous night in Bologna.

David Seaman perhaps expected a quiet night as England’s number one, but found himself picking the ball from the back of the net inside the opening nine seconds.

Seaman spent more than a decade as first-choice for the Three Lions and was beginning to establish himself as number one towards the end of Graham Taylor’s reign, later proving an irreplaceable figure for Terry Venables as England reached the semi-finals of Euro ’96 on home soil.

He featured in a further three major tournaments and earned 75 caps for the national side, in addition to winning three league titles during a silverware-laden spell at Arsenal.

Another member of the Arsenal backline, Dixon enjoyed the most consistent period of his international career during Graham Taylor’s tenure, and memorably recalled to talkSPORT how San Marino’s shock opener left him both stunned and amused.

“I looked over and saw Pearcy go to knock it back to David Seaman, and it’s gone in. If it had been today where there are 50million cameras I would have had to retire, because I burst out laughing.

“I was in such shock, my reaction was ‘I don’t know what to do now’. So I just laughed. I actually found it quite amusing at the time and immediately went into, ‘oh my god, what are the papers going to say?'”

It’s fair to say that Dixon’s amusement was short-lived as England failed to reach the World Cup, whilst the San Marino clash proved his last cap for more than five years and his penultimate appearance for the Three Lions, his final cap earned in a 1999 defeat to France.

Des Walker earned the last of his 59 caps for England during the win at San Marino, the defender fading rapidly from the consciousness despite being an ever-present at international level for five years.

Walker had formed part of the side that reached the World Cup semi-finals at Italia ’90, missing just two internationals from his debut under Sir Bobby Robson in 1988, to his last against San Marino.

The centre-back’s costly conceding of a late penalty to the Netherlands contributed to England’s failure to qualify for the World Cup, though his subsequent exile from the squad at the age of 27 came as a surprise.

Walker’s club career took in spells at Nottingham Forest, Sheffield Wednesday and Sampdoria, making 801 appearances before his retirement in 2005.

Gary Pallister is another name whose international career failed to deliver the caps it perhaps deserved, with the former Manchester United defender one of English football’s best at his peak.

Pallister spent nine seasons with the Red Devils and won four league titles in the early seasons of the Premier League, whilst he was named in the PFA Team of the Year on five occasions and won the PFA Player of the Year award in 1992.

Despite that success at club level, however, he amassed just 22 caps for England.

Stuart Pearce will forever be associated with that night against San Marino, the left-back’s under-hit backpass providing Gualtieri with the opportunity to stab home the shock opener for the minnows.

It was a lowlight of an illustrious international career for ‘Psycho’, who won 78 caps and featured in the sides that reached the semi-finals of the 1990 World Cup and Euro ’96.

Pearce missed a crucial spot-kick during the semi-final shootout defeat to West Germany at Italia ’90, before earning redemption six years later in a shoot-out win over Spain, his impassioned celebration one of the most iconic England images of the modern era.

Stuart Ripley earned just two senior caps for England, making his debut for the Three Lions during the 7-1 win over San Marino.

The winger’s club career included lengthy spells with both Middlesbrough and Blackburn, winning the Premier League title with the latter during the 1994/95 season after providing the ammunition for front pairing Alan Shearer and Chris Sutton.

Ripley’s second cap came almost four years after his debut, featuring in a 4-0 win against Moldova in September 1997.

Paul Ince scored England’s equaliser on the night with a driven low finish from distance, part of a brace for the Manchester United midfielder as the Three Lions fell agonisingly short of the scoreline needed to qualify.

Ince’s second came after turning home Les Ferdinand’s cross to make it five on the night, his double remarkably the only goals of a stellar 52-cap international career that saw the midfielder become England’s first black captain.

Ince was amongst the finest Premier League midfielders of his generation and won two league titles, two FA Cups, the League Cup, and European Cup Winners’ Cup during his time at Old Trafford, later having spells at the likes of Inter Milan, Liverpool, Middlesbrough and Wolves before retirement.

His son, Thomas, was capped for England at youth level, earning 18 caps and scoring three goals for the u21 side.

David Platt’s stellar career with England included 27 goals scored from just 62 appearances, starring as part of the side that reached the last four at the 1990 World Cup and remaining a central figure as the Three Lions reached the Euro ’96 semi-finals.

Platt was in the midst of a spell in Italian football when England faced San Marino in Bologna, having departed Aston Villa for spells at Bari, Juventus and Sampdoria, before returning to English football with Arsenal and winning a domestic double in 1997/98.

His penchant for ghosting forward and scoring goals from midfield made Platt an invaluable contributor for England, whilst he captained the national side for the first time in the reverse fixture against San Marino at Wembley, scoring four goals in a 6-0 win.

Like Walker, the last appearance of Andy Sinton’s international career came during the win at San Marino, with the former Queens Park Rangers and Sheffield Wednesday winger failing to earn a recall following England’s failure to reach the World Cup.

Sinton made his debut in a 1-1 draw with Poland in November 1991 and earned 12 caps – all of which came under Graham Taylor – though failed to score during his brief spell as an England player.

Les Ferdinand was amongst the Premier League’s finest centre-forwards during the early nineties, scoring 60 goals across three top-flight seasons for QPR, before earning a £6m move to Newcastle and winning the PFA Player of the Year award during his debut campaign at St James’ Park.

Having risen from non-league, Ferdinand was 26 at the time of his international debut in 1993, scoring a late sixth as San Marino were beaten 6-0 at Wembley.

Ferdinand retained his place in the side for the return fixture 10 months later, scoring England’s third in an ultimately failed attempt to reach the 1994 World Cup.

He made just 17 appearances for England and scored five goals across his Three Lions’ career, with competition for places from the likes of Alan Shearer, Ian Wright, Teddy Sheringham, Andy Cole and Robbie Fowler restricting his opportunities at international level.

Four goals from Ian Wright were not enough to seal England’s passage to the United States, with the former Arsenal forward leading the Three Lions’ fightback with a clinic in finishing in Bologna.

Wright had scored just one previous international goal after being handed his debut by Taylor in 1991, but netted four times to claim the match ball – with Harry Kane’s recent four-goal haul the first time since Wright’s exploits that an England player has netted four times in a fixture.

Despite a prolific record at club level that included six successive seasons of scoring 23+ goals for the Gunners, he struggled to cement automatic status with England and made 16 of his 33 England appearances from the bench.

Wright also had the misfortune of never representing the national side at a major tournament, with only Mick Channon having ever amassed more caps without featuring in a World Cup or European Championship.