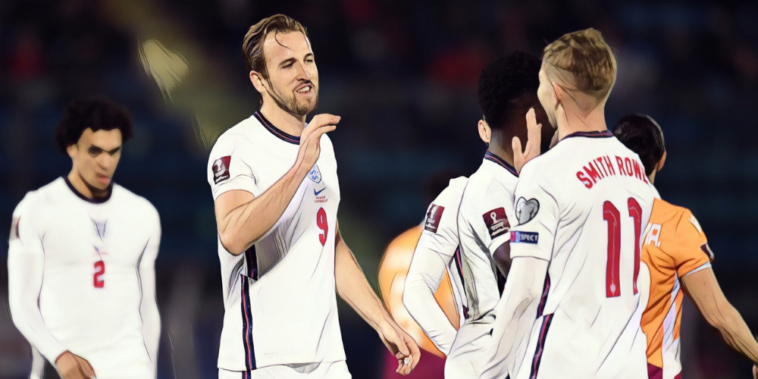 England sealed their place at next year’s World Cup with a thrashing of San Marino on Monday, with Gareth Southgate’s side recording a 10-0 win against FIFA’s lowest-ranked nation.

San Marino have proven regular whipping boys in past qualification campaigns for Europe’s elite, including the Three Lions who have met the tiny nation – boasting a population of less than 35,000 – regularly in recent years.

Following England’s thumping win over San Marino, we’ve looked at the sides the Three Lions have most enjoyed facing this century, ranking the five countries to have conceded the most goals against England since 2000.

England have faced Montenegro six times since the nation gained independence in 2007, with the first meeting resulting in a goalless draw between the sides in qualification for Euro 2012, the latter finishing behind the Three Lions before losing to the Czech Republic in the play-offs.

Each of the first three meetings resulted in the shares spoiled – including a 2-2 draw that saw Wayne Rooney sent off and suspended for Euro 2012’s opening fixtures – though more recent clashes have been one-sided affairs.

England beat Montenegro by a combined score of 12-1 across two qualifying fixtures for Euro 2020, celebrating the 1,000th game in the nation’s history with a 7-0 thrashing at Wembley, a fixture which saw Harry Kane score a hat-trick and Tammy Abraham net his first international goal.

England have scored 21 goals from just eight games against Switzerland since 2000, with the Three Lions winning seven and drawing one of their meetings with the Swiss this century.

The first since the turn of the millennium saw the two teams clash at Euro 2004, a fixture which saw a teenage Wayne Rooney become the youngest goalscorer in European Championship history.

Rooney scored twice as the 18-year-old announced himself on the international stage, before Steven Gerrard added a third in a 3-0 victory.

The Three Lions’ also scored three times during a win in Basel in 2010, whilst England twice beat Switzerland 2-0 during Euro 2016 qualification with Danny Welbeck scoring a brace in September 2014.

Croatia rank third for the most goals conceded to England since the turn of the century, shipping 22 goals across 10 fixtures with the Three Lions.

After a costly defeat to Croatia saw England miss out on Euro 2008, the Three Lions exacted revenge during qualification for the 2010 World Cup, with Theo Walcott scoring a stunning hat-trick during a 4-1 win in Zagreb.

England won 5-1 in the return fixture courtesy of braces from Lampard and Steven Gerrard to secure their place at the World Cup, whilst the most recent meeting between the sides saw Raheem Sterling score the winner at Euro 2020.

The increasing number of nations in qualification has led to some sizeable mismatches in the international game, with Andorra amongst the sides who are regularly handed huge defeats to Europe’s elite.

Andorra – currently ranked 157th in the world – have won just four qualification matches since first entering World Cup qualifiers ahead of the 2002 tournament, two of which have come against fellow minnows San Marino in qualification for Qatar 2022.

Fixtures with England have seen Andorra concede 25 goals and fail to score in six games, including losing by a combined score of 9-0 across two game in World Cup 2022 qualifiers.

No side has conceded more goals against England this century than San Marino, who found themselves on the wrong side of a ruthless performance from Gareth Southgate’s side this week.

England scored ten goals in a fixture for the first time since 1964 after recording a 10-0 win, a fixture which saw Harry Kane become the first player to score four goals in a game for the Three Lions since Ian Wright – also against San Marino – in 1993.

Kane also became the first England player in 64 years to score successive hat-tricks after netting a treble against Albania on Friday, whilst his 16 goals for the calendar year is also a new national record.

Remarkably, England’s 10-0 win fell short of inflicting San Marino’s biggest ever defeat, with Germany having beaten the same opposition by a 13-0 scoreline in September 2006.

England had previously beaten San Marino 5-0 in the first game of their qualification campaign for Qatar 2022, a fixture which saw Dominic Calvert-Lewin score twice and Ollie Watkins net a debut goal for the national side.