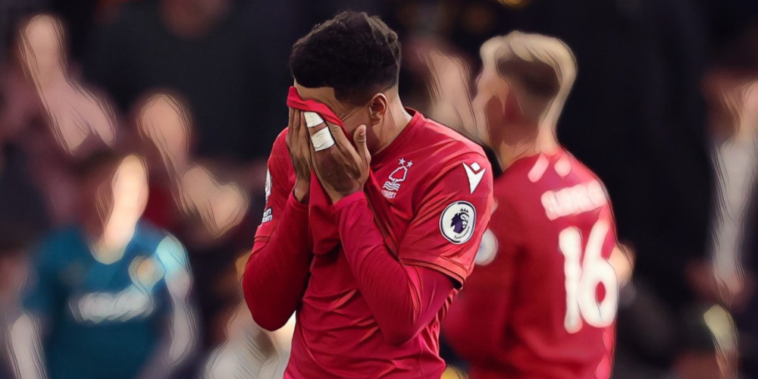 Nottingham Forest’s return to the Premier League was celebrated during the summer as the club ended an exile of more than two decades to return to the top table of English football.

Steve Cooper had exceeded all expectations to secure promotion and arrived in the Premier League with a rising reputation. Forest’s offer of a new deal – despite the club’s struggles this season – was a testament to Cooper’s coaching credentials, but off the pitch their scattergun summer has removed all continuity at the City Ground.

The club saw 2⃣2⃣ players join over the summer! pic.twitter.com/bKK8Vd7UKb

Their stunning splurge on more than 20 new players has been well-documented, but the fall-out from a recruitment drive that lacked any form of clear plan took place last Tuesday when George Syrianos, the head of recruitment and Andy Scott, the head of scouting, were both sacked.

Those dismissals were acknowledgement that Forest appear to have got it badly wrong so far, bringing in an eclectic collection of additions that Cooper has found hard to fit into a cohesive team. The 42-year-old has already abandoned an ambitious approach for a more pragmatic one, as Forest look to stop a rot that has seen the club take just five points from ten games. It’s Brighton up next and there are few who fancy Forest to turn it around at the Amex.

The unprecedented timing of the winter World Cup could come to benefit Forest, as the season pauses next month. If Forest can remain in reach of survival, that break could allow Cooper and his coaching team precious time to work with their struggling side.

Crystal Palace’s indifferent form has gone somewhat under the radar so far this season, with the Eagles’ mid-table position having seen their struggles around goal overlooked.

Since the start of September, Palace have posted the lowest xG figures in the Premier League, with their expected goals figure of (3.63) less than Wolves (3.96) and Southampton (4.01). Wilfied Zaha has not scored across his last four league appearances and Patrick Vieira has called from more from his attacking players.

24 – Since the start of last season, Crystal Palace are the team with the most Premier League matches in which they didn’t reach double figures for shot attempts (today being the 24th occasion). Frugal. pic.twitter.com/NpYpOIQvcM

Palace have the talent to be more creative moving forward and Vieira discussed Eberechi Eze following the goalless draw with Leicester, as his side struggled to break down the division’s worst defence.

“All those forward players with talent, I would like them to do a bit more and Ebs is one of them,” Vieira said at full-time.

The Frenchman also stated his belief that Eze could be a wildcard for England’s World Cup squad should he raise his level ahead of next month’s tournament.

“If we perform well as a team, those players are always going to have a chance to go. Ebe is one of them because he has been playing well and scoring goals,” he said, as per The Athletic.

“I always believe that when you’re building a group for a World Cup, you always have one or two surprises, and he can be one of them.”

Graham Potter has built his reputation on expansive and attractive football, but the early period of his reign at Chelsea has seen success come from the foundations.

It’s now five successive wins for the west Londoners in all competitions, the last four of which have come alongside clean sheets. Chelsea have gone more than seven hours without conceding a goal, as Wolves, AC Milan (twice) and Aston Villa have all fallen victim to Potter’s new-look team.

Potter had Kepa Arrizabalaga to thank for Sunday’s shut-out however, as the Spaniard produced a brilliant individual performance during the win at Villa Park. He made seven saves – the most a Chelsea keeper has recorded in a Premier League game since 2017/18 – to earn three points and his return to form and prominence has been a major plus in recent fixtures.

😏 Chelsea haven't conceded a goal in more than seven hours of football. Graham Potter starting to work his magic pic.twitter.com/HZ0a6LeBIC

The mood at Liverpool has lifted following impressive wins against Rangers and Manchester City, as Jurgen Klopp’s side followed a seven-goal mauling at Ibrox by ending City’s unbeaten start to the campaign.

The Reds remain significantly adrift of the summit, but will hope to build momentum as West Ham prepare to visit Anfield in midweek. David Moyes’ side will arrive short of options at centre-back, with Kurt Zouma, Angelo Ogbonna and Craig Dawson all doubts. Aaron Cresswell and Ben Johnson filled-in in central roles at the weekend as Moyes looked to compensate for the lack of cover.

Liverpool will hope to exploit a depleted defence on Wednesday evening, as Roberto Firmino and Mohamed Salah look to maintain their goalscoring form. Diogo Jota’s injury could also hand a chance to Darwin Nunez from the start, who came off the bench to demonstrate the best and worst of his game against City.

📺 Jurgen Klopp on Darwin Nunez adapting to the Premier League:

The Uruguayan posed problems with his direct running and power, but must refine his game in the final third earn a regular role from the start. Salah was among those irritated by a somewhat blinkered approach at the weekend.

Newcastle have climbed into the European positions after a strong start to the season, with Eddie Howe’s team having lost just once in the Premier League to date.

Turning draws into wins had been problematic during the early part of the campaign, but a goalless draw at Manchester United will be deemed a positive result after thrashings of Fulham and Brentford. The success of the side has been built in defence, with no side having conceded less than Newcastle’s nine goals this season.

Eddie Howe on the defensive record:

"It's very pleasing. It's a compliment to the players and we very much have the mindset here that we want to defend as a team, right from the strikers back to the goalkeeper and you can see that in how we've played this season." pic.twitter.com/MBiMKEeZ6d

The Magpies are four points outside the top four having played a game more, though face an appealing run of games as the club look to put the pressure on those above them. Newcastle host Everton in the Premier League on Wednesday evening, before facing Aston Villa (H) and Southampton (A) in two of their following three games.

A maximum return from those games will leave Newcastle well-placed for a sustained run at continental qualification.

Tottenham could take on a familiar face this weekend as the north Londoners take on Manchester United at Old Trafford.

Christian Eriksen is likely to be on the opposing side having emerged as a central figure for Erik ten Hag, having signed for the Red Devils on a free transfer from Brentford during the summer. Spurs were understood to be interested in re-signing the Dane, with Antonio Conte this week suggesting that the club had been keen on a deal.

Antonio Conte speaks on how close Tottenham was to signing Christian Eriksen in the summer ⬇️ pic.twitter.com/qFVIqnvDFQ

Spurs will know more than most the capabilities of the 30-year-old, who has excelled in a deeper role as the link between United’s defence and the final third. Shackling the former Spurs star will be key to the Conte’s hopes of earning a positive result and a real test for the blossoming partnership of Rodrigo Bentancur and Pierre-Emile Hojbjerg in the club’s engine room.

It’s been Spurs’ best start to a season since 1964 and a win at Old Trafford would further increase the growing confidence around the group.

Steven Gerrard was faced with boos from the home crowd as Aston Villa’s struggles continued at the weekend, with a promising first-half performance undone in the club’s 2-0 defeat to Chelsea.

A fine performance from Kepa Arrizabalaga frustrated a Villa side who dominated for periods, in a result which leaves Gerrard’s struggling side just a point above the bottom three.

“I hear the group singing from the Holte End. I’m aware of it all, but it is what it is,” Gerrard said, as per the BBC. “I have to accept it and try and do everything I can to change the way they’re feeling at the moment.”

The time to change that feeling is short. Villa face Fulham (A) and Brentford (H) in their next two, two fixtures the side might have targeted maximum points from before a ball had been kicked this season. With rumours surrounding Mauricio Pochettino as a potential replacement, this is the defining period in Gerrard’s tenure.

Having taken seven points from their opening three games, Leeds have slipped down the table at a rapid rate following a winless run.

Despite a decent performance, Leeds lost 1-0 to Arsenal at the weekend as Patrick Bamford missed a penalty at Elland Road. The loss extended the club’s run without a win to six games and their lack of cutting edge leaves Leeds looking nervously over their shoulder.

It’s difficult to be patient as a manager, I want to win every game. I ask the lads to invest everything they have into our process & each other. My experience is that they will benefit massively from this mentality. We’re getting better, no doubt, & I back these men all the way! pic.twitter.com/hxZy0jzufY

Jesse Marsch’s team are just a point above the Premier League’s bottom three, ahead of a crucial clash with struggling Leicester. The Foxes are bottom of the division and leaking goals, a positive sign for a Leeds team with just one goal in their last three.

Another setback, however, would tighten up the table at the bottom.