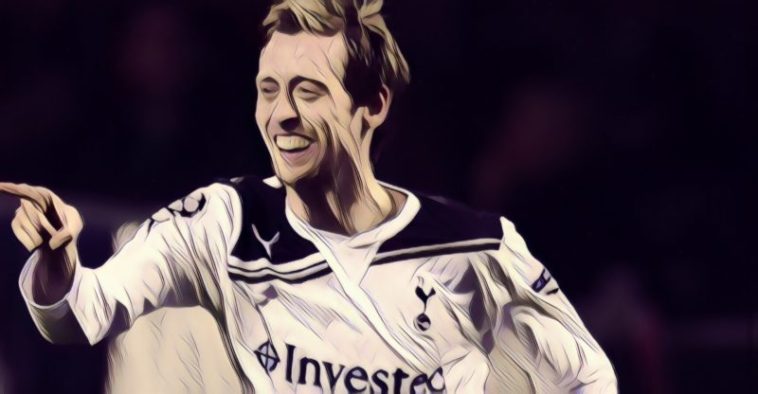 Tottenham face Liverpool this evening in what shapes as a huge clash between the top four rivals in north London, just one point and one position currently separating the two sides in the Premier League table.

Both of these historic clubs are steeped in tradition, with several players having donned the club colours of both sides.

Ahead of their latest meeting, we’ve decided to look back through the Premier League archives at five of the best players to have represented both Spurs and Liverpool.

An original ‘Spice Boy’ and son of ‘Arry, Jamie Redknapp enjoyed a decent career despite being plagued by injuries.

Signed as a teenager by Liverpool in 1991, Redknapp spent over a decade at Anfield and was eventually named as club captain in 2000.

Redknapp became almost as famous for his off-field lifestyle as his on pitch actions, however, marrying pop singer ex-wife Louise and being part of a group of Liverpool players labelled the ‘Spice Boys’ for their lad culture and lavish lifestyle.

He sole major honour was a League Cup victory in 1995, having spent the season on the treatment table as Gerard Houllier’s side won a treble of major honours in 2001.

Redknapp left for Spurs on a free transfer the following year, where injuries again hampered his progress in a three-year spell.

Redknapp has since forged a successful career in punditry and TV where, other than a fractured wrist suffered while filming quiz show A League of Their Own, he has largely managed to avoid injury.

The Republic of Ireland’s record goalscorer and the 14th highest scoring player in Premier League history, Robbie Keane enjoyed a successful career at a host of English clubs, apart from Liverpool.

Having made his name at clubs such as Wolves, Coventry, Inter Milan and Leeds, Keane signed for Tottenham in 2002 where he began to score prolifically. After scoring 107 goals in six seasons at White Hart Lane, winning one League Cup, Keane attracted the interest of Liverpool who paid £19m for his services in 2008.

The Irishman was supposed to be the perfect partner for star forward Fernando Torres, but just half a season and five league goals later, Keane was taking his trademark cartwheel celebration back to North London.

Another three seasons at Spurs followed, interrupted by loans at Celtic and West Ham, before Keane packed his bags and headed for the sunshine of Los Angeles. Over in the MLS, Keane even upstaged a certain David Beckham as perhaps LA Galaxy’s greatest ever player.

Having began his career at Tottenham without ever playing a senior game, Peter Crouch’s career came full circle in 2009 when he rejoined the club.

Before all that, Crouch turned out for nine clubs, including a three-year spell at Anfield with Liverpool.

Despite failing to score in his first 19 matches for the club, Crouch became a crowd favourite at Liverpool with the supporters even coining a genius chant for the towering 6ft 7 inch forward.

Crouch lifted the 2006 FA Cup with the club, whilst also finishing runners-up in the 2007 Champions League final, scoring 42 goals before leaving for Portsmouth.

He joined Spurs a year later, helping fill the role of the big man in a classic ‘little and large’ strike partnership with fellow England international Jermaine Defoe.

See Also: Players with the most headed goals in Premier League history

Some players, for all they achieve in their careers, are remembered most for one particular moment.

For some, it’s a last-minute winner or a cup final goal. Unfortunately for ‘Rocket’ Ronny Rosenthal, his abiding memory is perhaps the most astonishing miss in Premier League history.

The Israeli signed for Liverpool, initially on-loan, in 1990. The forward would go on to spend four years at Anfield, scoring 21 league goals in 72 appearances.

The emergence of a young Robbie Fowler restricted Rosenthal’s opportunities at Anfield, and he moved to Tottenham in January 1994. Despite featuring regularly in North London, Rosenthal struggled for goals scoring just four times in the league in three seasons with the club.

Once voted as the ’17th hardest footballer of all-time’, Neil ‘Razor’ Ruddock is one man you’d want on your side in a pub brawl.

The towering centre-back earned a reputation as a no-nonsense defender during a lengthy career, taking in spells at the likes of Millwall, Southampton, and West Ham.

A larger than life character, Ruddock joined Spurs in 1992 but spent just a season in North London before joining Liverpool in a £2.5m transfer the following year.

During five seasons at Anfield he was rarely out of the headlines, with personal and weight issues creating plenty of tabloid news. His rough house approach also came to light on several occasions, including the breaking of Peter Beardsley’s jaw with an elbow during a testimonial match.

He left Liverpool in 1998, following the arrival of Gerard Houllier as manager.