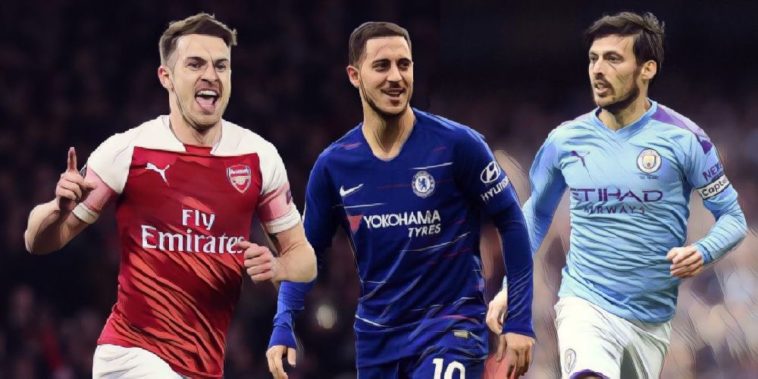 Well, the 2010’s has been some decade for Premier League football. The past ten years has seen the end of the Sir Alex Ferguson and Arsene Wenger dynasties, whilst Manchester City have emerged as the dominant force in English football and Leicester City were improbably crowned champions four years ago in one of the greatest ever sporting shocks.

As we head into the new year and with it the new decade, we’ve decided to look back at some of the greatest stars to have graced the English game.

Here is each top six side’s Player of the Decade for the 2010’s:

A tough one to call, given Robin van Persie’s brilliance at the turn of the decade and Laurent Koscielny’s consistency, though we’ve opted for Aaron Ramsey’s longevity and big-game temperament to crown the Welshman as Arsenal’s best player of the past ten years.

The midfielder would arrive as a teenager under Arsene Wenger and flourish into one of the Premier League’s best creative midfielders, developing a habit of arriving into the box to score goals and bringing a touch of class to proceedings.

In what has been a difficult decade for the North London side, Ramsey has been key to their successes, winning three FA Cups and playing a pivotal role in their Wembley victories.

Ramsey would score the winning goal in extra-time to seal a comeback victory against Hull City in the 2014 final, repeating the trick with another winner against Chelsea three years later and also playing in their 2015 final victory over Aston Villa.

He would make over 300 appearances for the club and score over 60 goals in all competitions, bringing a long and successful career at the Emirates to an end with a move to Juventus last summer.

The Brilliant Belgian would light up the Premier League for seven seasons at Stamford Bridge, his dazzling feet and ability to beat players worth the entrance fee for the adoring Chelsea supporters.

He would help inspire the club to two title wins, being named as the PFA Player of the Year and Football Writer’s Footballer of the Year during the first of those successes under Jose Mourinho.

Further silverware would come in the form of the FA Cup, League Cup and two Europa League victories, few players having had a greater influence on the club’s greatest moments of the past decade.

Hazard would ultimately leave last summer to fulfil his ambitions of playing for Real Madrid, the winger departing as one of the finest attacking talents in Premier League history having scored 110 goals in 352 appearances for the club.

It demonstrates the impact that the Dutch defender has had on Liverpool that we’ve opted for his selection here, Van Dijk beating off competition from the likes of Steven Gerrard, Luis Suarez and Mohamed Salah to be crowned as Liverpool’s Player of the Decade.

Few players have had such a transformative impact upon a club as the former Southampton man, whose world-record move for a defender has propelled Jurgen Klopp’s Liverpool to new heights.

What was once an Achilles heel for the Merseyside club has turned into a strength, Van Dijk’s commanding presence helping turn the club into title contenders and back-to-back Champions League finalists.

The latter of those appearances would deliver the ultimate success, Van Dijk named Man of the Match in the final victory over Tottenham, and the 28-year-old will play a key role in the club’s hopes of success over the coming seasons, starting with an attempt to win that elusive Premier League title this campaign.

Sergio Aguero’s goal scoring exploits might take the headlines, whilst Vincent Kompany’s inspired leadership and Yaya Toure’s imposing presence may have cemented their positions as legends in the blue half of Manchester, though the ever-present and evergreen Silva might just be the best of the lot.

Nicknamed El Mago at the Etihad, Silva arrived at the club from Valencia in 2010 and has since gone on to establish himself as arguably the greatest player in the club’s history.

The diminutive Spaniard has been at the heartbeat of four title-winning styles, his evasive style and creative football providing the platform for those around him to flourish.

His City career will come to a close at the end of the season, and fans should enjoy the midfield maestro whilst they still can.

Manchester United‘s fortunes have declined somewhat over the past ten seasons, winning two titles in the early years of the decade before enduring a transitional phase following the retirement of Sir Alex Ferguson.

Despite their struggles in recent times, goalkeeper David De Gea has remained the one constant, providing consistent displays of the highest quality to gain a reputation as arguably the world’s finest shot-stopper.

Part of the club’s title-winning team in 2013, De Gea has been named in the PFA Team of the Year on five occasions, in addition to being named as United’s Player of the Season four times, a testament to his standing amongst his peers.

The Spaniard’s aura may have slipped slightly over the past year, though he has undoubtedly been his club’s best player over the course of the past decade.

Current hero Harry Kane may feel slightly aggrieved to have missed out on this crown, but it is worth remembering just how brilliant Gareth Bale was in his final seasons as a Tottenham player.

The Welsh winger was the Premier League’s stand-out player at the turn of the decade, winning the PFA Player’s Player of the Year two times in three seasons, the second of which was in addition to the Footballer Writer’s award as the league’s finest player following a 21 goal campaign.

This goal from Gareth Bale 😍

Could he have won Tottenham a trophy if he stayed in the Premier League? 🤔pic.twitter.com/PExZZhCKn2

Breathtakingly quick with the ball at his feet, Bale would breeze past opponents who would appear almost stationary, hitting a series of spectacular goals and delighting masses of football fans across the country.

As invariably happens with the league’s best talent, Spain’s big boys would come calling and he would move to Real Madrid in a world-record deal, winning four Champions League titles during his time in La Liga.

See Also: From RVP’s volley to Danny Rose’s debut: Five of the best goals of the decade