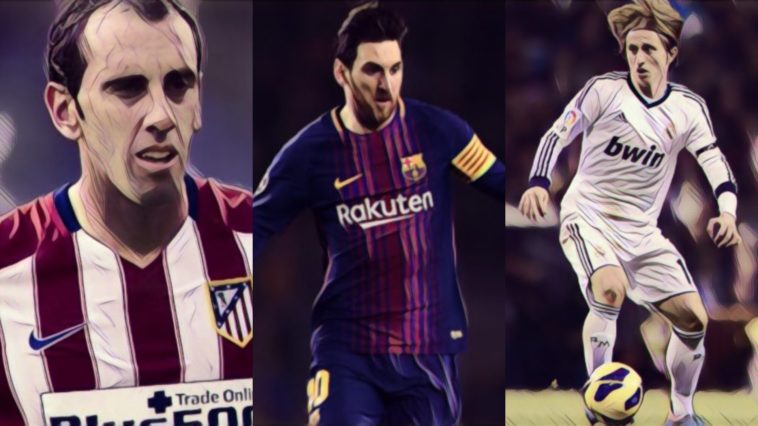 We’ve put the 11 best La Liga players of the last ten years into a starting XI, a lineup dominated by players from Real Madrid and Barcelona with some deserved inclusions for Atletico Madrid, who broke up the monopoly of the ‘big two’ for a brief moment when claiming the league title in 2013-14.

The dominant league side throughout the decade was Barcelona, who have been crowned La Liga Champions on seven occasions, with the others going to Real Madrid twice and Atletico once.

We have decided to go for 4-1-2-1-2 formation to try and accommodate as much quality as possible. With the Spanish national team also dominating at the turn of the decade, competition for places on the La Liga Team of the Decade, particularly in midfield, was intense.

The La Liga Team of the Decade:

The current Atletico Madrid shot stopper has been a solid last line since joining Diego Simeone’s side in the Summer of 2014. With Thibaut Courtois returning to parent club Chelsea after Atleti were crowned La Liga Champions in 2013-2014, a replacement on par with the Belgian was key for El Cholo’s men.

Oblak was snapped up from Benfica in July 2014 and the Slovenia international has won the Ricardo Zamora Trophy, awarded for La Liga’s best goalkeeper for the last four consecutive seasons.

The 36-year-old Brazilian has had a glittering career, turning out for many of Europe’s elite clubs such as Sevilla, Barcelona, Juventus and Paris Saint-Germain.

Alves signed for Barcelona in the Summer of 2008 and it was at the Nou Camp where he spent his prime years. The right-back was a key member of the back four in the Barca side which dominated La Liga and had considerable success in Europe in his time at the Nou Camp.

Probably won’t be remembered for his defensive qualities, but Alves was unique. His link-up play, particularly with Lionel Messi when the Argentine was used more on the right-hand side of the attack/midfield earlier in his career, was key to Barca breaking down opponents on a consistent basis.

Sometimes described as a love him/hate him type player in the John Terry/Luis Suarez mould, Ramos has been imperious for Los Blancos since joining from Sevilla in 2005.

Ramos’s leadership qualities, desire to win at all costs and overall ability make him the kind of player you would do anything to have in your team. His inclination to play on the edge divides opinion, but his organisation of the defence and his phenomenal scoring record – 44 goals in La Liga – show his importance as an attacking threat.

The Uruguayan signed for Atletico in the Summer transfer window of 2010 from Villarreal and was a colossus in the heart of the defence in what has been a relatively successful period for the Madrid based club before signing for Inter Milan last Summer.

In a long list of highlights for Los Colchoneros, the equalising headed goal to clinch the league title away to Barcelona in May 2014 must rank as one of Godin’s greatest moments.

The 33-year-old was partnered by some excellent defenders in the heart of the Atleti defence, Miranda, Stefan Savic and in the latter part of his career in Madrid fellow countryman Jose Gimenez. All of these players were battling it out to partner Godin, who was Diego Simeone’s leader on the pitch.

Jordi Alba was signed for Barcelona in June 2012 and has been an integral part of the Catalan side since then, operating at left back. He has five La Liga winners medals to his name and his ability to attack and create down the left-hand flank has been a valuable option for Barca this decade.

Alba’s 38 league assists in his time at the Nou Camp is a healthy return from the Catalan. With pace to burn, he has forced his way back into the national squad off the back of an impressive start to the current campaign.

The 31-year-old Spanish midfielder has been an ever present at the base of the Blaugrana midfield in the past decade. A modest nine goals and 30 assists across all competitions doesn’t tell the true story of Busquets’ worth.

In a midfield where Xavi Hernandez and Andres Iniesta owned the ball through the first half of the decade, Busquets’ was the defensive midfielder who broke up opposition attacks and played the simple pass either to the full-backs or the aforementioned creative forces in the team.

Busquets’ has played under four different managers at Barca but he has always been a regular, a necessary in ensuring Barcelona have enough possession to dominate games.

A graduate of La Masia, the Barcelona youth academy, Xavi was an ever present in the midfield for the Catalans from the turn of the century until the Summer of 2015.

Barcelona under Pep Guardiola from 2008-20012 were similar to subsequent Guardiola sides, possession was key, retaining the ball and wearing down the opposition was how they succeeded and Xavi was the orchestrator for his Barca side.

Seven league titles in total, four in the last decade, 57 league goals and 105 assists in his Barcelona career, signs of Xavi’s contribution to the side.

More important however was his overall influence and game management skills. Xavi set the tone, turned up the tempo when necessary, slowed things down if that was required. The ultimate team player.

The Croatian midfielder signed for Los Blancos from Tottenham after the 2011-2012 season. After initially struggling to gain acceptance from the Bernabeu crowd, not the first player to experience this, Modric has been a consistent performer throughout this decade.

While he has only one La Liga title to his name, Modric’s return of 14 goals and more importantly, 33 assists, is testament to the creative ability of the Croatian. Four Champions League winners medals have also been added to his collection while in Madrid.

Ballon D’Or winner in 2018, admittedly off the back of an exemplary showing at the World Cup in Russia, fitting recognition for what has been a decade to remember for Modric.

Nine League titles for Don Andres, who hails from Albacete, over a glittering 16-year career at the Nou Camp. Iniesta, like his teammate Xavi, is a graduate of La Masia and lit up La Liga from the 03-04 season until the end of the 17-18 campaign, scorer of 35 goals and 75 assists.

Iniesta operated slightly to the left of the Barcelona midfield and was a big game player at both club and international level. Standout goals in ‘clutch’ moments are the 93rd minute winner against Chelsea in the Champions League Semi Final to send Barcelona to the final in Rome in 2009.

Iniesta also scored the all-important winner a year later against Holland in extra-time in the World Cup final. A player who could last the pace and be the difference in tight games, a wonderful attribute to have.

A prolific career in La Liga, Cristiano Ronaldo’s numbers are simply phenomenal. Signed from Manchester United at the beginning of the 09-10 season, the Portuguese forward scored 311 times in La Liga for Real Madrid, before departing for Juventus at the end of the 17-18 campaign.

Twice a La Liga champion, four time Champions League winner were some of the honours amassed by Real Madrid during his time at the Bernabeu. His ability to reinvent himself, develop his game, play in different positions are sure signs of the time and hard work the Madeira-born player has dedicated to his profession.

A right-winger/midfielder at Manchester United, cutting in from the left-hand side early on at Real Madrid and an out and out centre-forward show that Cristiano Ronaldo’s natural ability/talent, discipline and dedication to his sport have made him one of the best ever to take to the field.

Real Madrid have struggled for goals since he left for Italy, proving he is an irreplaceable player.

We are fortunate to be living in the era of Lionel Messi. The diminutive magician has been entertaining the Nou Camp, the masses, the universe since making his bow for Barcelona against Espanyol in 2004, a late substitute for Deco.

Messi has scored 432 league goals and has made 169 for his teammates. This is one of the most endearing parts of Messi’s play. Forever looking to play it to the player in the best position, his team winning is number one. Personal awards and accolades have obviously come his way but he seems more content when Barcelona are picking up silverware, collectively.

Comparisons with Diego Maradona are obvious as both hail from Argentina, are low to the ground, were gifted with a wand of a left foot, and revered in their home land.

Messi’s longevity, professionalism and continued excellence has him in the conversation as the best ever footballer and rightly so.13 league goals in the current campaign has Messi leading the way in the scoring charts in La Liga, on his way to his fourth consecutive El Pichichi crown, same as it ever was!