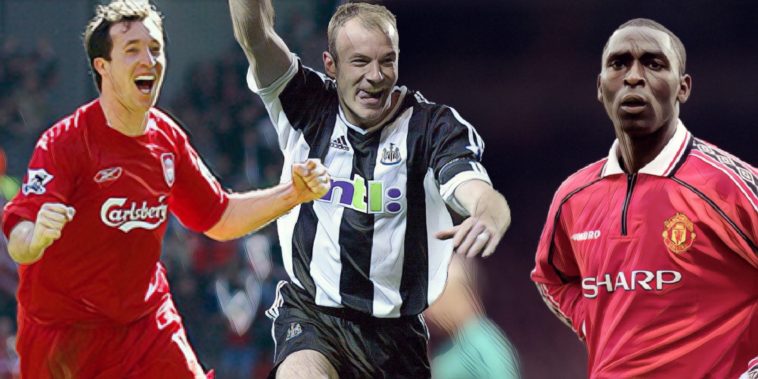 The number nine. An attacking focal point of any side and often the player looked to for inspiration when your side is desperately in need of a goal.

Throughout Premier League history we have seen several iconic stars adorn the hallowed number, with many thriving in the pressurised environment of being the go-to man when it comes to putting the ball in the back of the net.

We’ve decided to celebrate some of those illustrious goal-getters, with a look at five of the best number nines in Premier League history…

Where else to start but the greatest goalscorer in the history of the competition?

Few players are as synonymous with the number nine as the Geordie goal-machine, who would fire a record 260 goals in the Premier League and is the only player in the division’s history to hit 30+ goals in more than one season, achieving the feat in three consecutive campaigns for Blackburn between 1994 and 1996.

Shearer would win the title during that prolific period at Ewood Park, before joining boyhood club Newcastle in a world-record deal, scoring 206 times on Tyneside to become the club’s all-time record goalscorer.

A player capable of scoring all types of goals, Shearer was twice named as the PFA Player’s Player of the Year and the three-times Golden Boot winner is one of just two players alongside Wayne Rooney to have hit over 200 Premier League goals.

See also – 20 of the best quotes about the Premier League legend, Alan Shearer

Another Tyneside hero, Ferdinand would begin his career at QPR and would score 60 league goals over three seasons with the club in the initial years of the Premier League, his prolific spell attracting the interest of Newcastle who secured his signing in a £6m deal in 1995.

It would be at St James’ Park where Ferdinand would enjoy the most successful period of his career, scoring 50 goals in just 84 appearances and forming a strong partnership with the aforementioned Shearer of who he would give his number nine shirt.

He would leave for boyhood club Tottenham, however, returning to London and spending five seasons at White Hart Lane, contributing 33 Premier League goals to his ever-increasing tally.

The powerful forward’s latter years would see him enjoy spells at West Ham, Leicester and Bolton, finishing his Premier League career with 149 goals in just 351 appearances.

What is it with Newcastle and number nines?

Having failed to make the grade at Arsenal, Cole would rebuild his career in the second tier before firing Newcastle to promotion in the early nineties.

The young forward was developing a burgeoning reputation but would announce himself in some style during that maiden top-flight campaign, firing a record 34 goals and leading the league for assists to be named as the PFA Young Player of the Year.

A similarly prolific start to the following season soon attracted the attention of Sir Alex Ferguson and Manchester United, bringing the forward to Old Trafford in a British-record deal where he would form part of a side that dominated the Premier League.

In seven seasons he would win five league titles, including forming part of the side which won the Champions League and FA Cup as part of an unprecedented treble in 1999.

Cole would fire 187 goals over the course of his Premier League career, the third-highest tally in history, latterly spending time at the likes of Blackburn, Fulham, Manchester City, Portsmouth and Sunderland before his retirement in 2009.

The mid-nineties saw a collection of fine forwards in English football, with Robbie Fowler’s emergence from the Liverpool academy the club’s great hope as they looked to challenge at the top once again.

Handed an opportunity as a precocious teenage talent, Fowler would soon demonstrate the ability which saw him regarded as a natural finisher, scoring five times in a League Cup semi-final against Fulham and earning regular inclusion in the club’s Premier League side.

He would begin his career sporting the number 23, before taking on the illustrious 9 shirt as his influence grew, Fowler being named as the PFA Young Player of the Year in consecutive seasons whilst scoring over 30 goals all competitions for three successive campaigns.

After winning the FA Cup, League Cup and UEFA Cup during his time at Anfield, he would later have spells at the likes of Leeds and Manchester City before returning to Liverpool under Rafael Benitez in 2006.

He would finish his career as the sixth-highest scorer in Premier League history, with 162 goals.

Hasselbaink would begin his Premier League career with Leeds United, joining the club from Boavista for just £2m and following a slow start began scoring regularly.

His debut campaign would see him score 16 times, whilst a haul of 18 the following year saw him earn a share of the Golden Boot alongside Liverpool’s Michael Owen and Aston Villa’s Dwight Yorke.

A contract dispute would see him leave Elland Road for Atletico Madrid, though he would return just a year later following a prolific season in Spain to join Chelsea.

The Dutch international would thrive at Stamford Bridge, winning a second Golden Boot in his debut season with the Blues.

Hasselbaink would hit 69 Premier League goals in just 136 appearances for Chelsea, latterly spending time with Middlesbrough and Charlton after being squeezed out following Roman Abramovich’s billionaire takeover and investment.

His powerful shooting and prolific goalscoring made him a firm fan’s favourite at a succession of clubs, Hasselbaink averaging almost a goal every other game with 127 goals in 288 Premier League appearances.

See also: Best of the 2010’s: The Premier League clubs that defined the decade