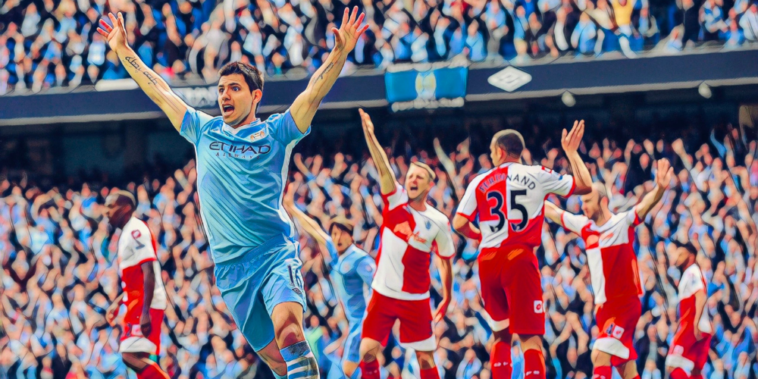 There is perhaps nothing more gripping than a tense Premier League title race and throughout the years we’ve been blessed with some nail-biting finishes in England’s top tier.

The prospect of two or more teams competing to the final stages of the campaign makes for enthralling viewing for football fans, as the anticipation and pressure builds in what is now commonly referred to as squeaky-bum-time.

Liverpool’s win at Southampton means that for the ninth time the title race will go to the final day, with the Reds just one point behind defending champions Manchester City ahead of Sunday’s final fixtures of the campaign.

We’ve decided to look back at some of the greatest conclusions to a Premier League season, the eight times the destination of the league title has been undecided heading into the final day.

Here are the eight times the Premier League title went down to the wire.

The early seasons of the Premier League era saw Blackburn Rovers emerge as a real force in English football, the Lancashire side backed by the millions of Jack Walker and propelled by the goals of British transfer-record signing Alan Shearer.

After finishing fourth and second in the first two seasons of the Premier League, there was a growing sense of belief around Ewood Park that the club could secure a first league title since 1914.

Standing in the club’s way, however, were Manchester United. The Red Devils were reigning champions and had ended a 26-year wait for a top-flight crown with back-to-back league titles under the guidance of Sir Alex Ferguson.

What ensued was a gripping title race between the defending champions and the financially-backed Rovers, though it was the latter who led for much of the campaign and headed into the final day two points clear.

Blackburn travelled to Liverpool on the final day of the season, though the fixture was seen as an advantage given Rovers were coached by Reds legend Kenny Dalglish and the Merseyside club’s rivalry with title rivals United.

Any suggestions Liverpool would lie down were swiftly removed, as the hosts came from behind to win at Anfield – leaving Blackburn reliant on United’s result away at West Ham.

Ferguson’s side could only muster a 1-1 draw at Upton Park in a game that saw chance after chance squandered. Blackburn’s final day defeat proved meaningless as Rovers were crowned champions for the first time in 81 years.

“I would love it if we beat them”.

The iconic words of Newcastle manager Kevin Keegan are etched into the division’s folklore as the Magpies’ title race with Manchester United came closer and closer to its climax in 1995/96.

Keegan’s comments will forever be associated with the former Newcastle boss after his side’s epic tussle with the Red Devils during the mid-nineties.

One of the most iconic seasons of the Premier League era saw United challenged by an entertaining Newcastle team under the guidance of the aforementioned Keegan.

Newcastle, boasting the likes of David Ginola, Les Ferdinand and Peter Beardsley among their ranks, raced into an early lead at the summit and looked set to end their long wait for silverware after opening up a 12-point advantage by mid-January.

What looked like a title procession soon turned into a title race, however, as the wheels began to fall off for the Magpies following the turn of the new year and United began to claw their way back into contention.

Five defeats in just eight games, including defeat to United at St James’ Park and a 4-3 loss to Liverpool in an Anfield epic, saw Newcastle falter.

United needed to lose on the final day at Middlesbrough to give Newcastle any hope of reclaiming top spot, but a 3-0 victory secured the club’s third title in four seasons and set up a second domestic double for the Red Devils.

The 1998/99 season saw Manchester United make history with an unprecedented treble-winning campaign, as Ferguson’s side lifted the Premier League, FA Cup and Champions League to immortalise themselves in footballing folklore.

Their season, however, saw them run agonisingly close for each of their major prizes, including in the Premier League title race against an Arsenal side who had won the domestic double the previous season.

The 1998/99 campaign was arguably peak United vs Arsenal, the two teams perhaps as evenly matched as any title contenders in the league’s history and a Chelsea side – largely forgotten but who lost just three games all season – following behind.

United led for much of the second half of the season but a late collapse at Liverpool – that saw former captain Paul Ince come back to haunt the club and equalise late on before celebrating exuberantly – handed Arsenal the initiative.

The Gunners would stumble themselves in losing to Leeds to take the title race to the final day, where United knew victory over Tottenham would see them wrestle the title back from north London.

Final day jitters saw Spurs open the scoring at Old Trafford, but goals from David Beckham and Andy Cole secured a comeback victory and crowned United champions – sealing the club’s first trophy and setting the foundation for a 10-day period that would change their history forever.

Manchester United and Chelsea went head-to-head for the game’s biggest prizes in 2007/08, battling in the title race and facing off in the first ever all-English Champions League final in Moscow.

The two sides had shared each of the previous three titles and were once again the leading contenders in England’s top tier, whilst Arsenal were also firmly in the race for much of the campaign after beginning the season in electric form.

Chelsea and United met at Stamford Bridge with just three games remaining, where Michael Ballack’s double – including a late penalty – saw the west London side move level with their rivals ahead of the final two fixtures of the season.

Victories in the penultimate games saw the two sides head into the final day level on points, though United’s vastly superior goal difference meant the Red Devils would be crowned champions with three points at Wigan.

Goals from Cristiano Ronaldo and Ryan Giggs secured back-to-back titles for Sir Alex Ferguson’s side as Chelsea laboured to a 1-1 draw at home to Bolton. United made it double agony for the Blues and a historic double by beating the west Londoners in the Champions League final on penalties just ten days later.

Manchester United and Chelsea again contested for the Premier League title on the final day two seasons later, the former trailing the latter by just a single point heading into the final ten games of the season.

The two sides compiled identical records across the run-in to take the title race to the final day of the campaign, a win for Chelsea at Old Trafford in early April proving crucial in the destination of the title.

Carlo Ancelotti’s Blues had impressed with their free-scoring approach and despite a defeat at Tottenham with three games remaining, held their nerve to win the title in emphatic style.

Chelsea finished the season with comfortable victories over Stoke, Liverpool and Wigan, the latter an 8-0 final day thrashing at Stamford Bridge that ended any hopes of United securing a fourth consecutive league title.

#OnThisDay in 2010…@didierdrogba scored a hat-trick to seal the #PL 🏆 for Chelsea with an emphatic 8-0 victory pic.twitter.com/0YUFOWkjj7

Ancelotti’s side completed a domestic double to conclude a memorable debut season for the Italian in English football, as Didier Drogba scored the only goal in a 1-0 win over Portsmouth in the FA Cup final at Wembley.

Each of the previously mentioned seasons have had their own form of final day drama and tension, but nothing compares to the final day of the 2011/12 season that saw Sergio Aguero score the most iconic goal of the Premier League era.

Manchester City had emerged as a competitive force at the top end of the Premier League following their billionaire takeover four years earlier, but the ‘noisy neighbours’ from the blue half of the city trailed perennial winners United by eight points with just six games to go.

United, however, uncharacteristically wobbled, losing at Wigan before drawing 4-4 with Everton at Old Trafford. Vincent Kompany then headed the only goal of the game in a Manchester derby victory for City in late April and suddenly the initiative was with the emerging force.

Both sides were level heading into the final day but, courtesy of a superior goal difference, Roberto Mancini’s side only needed to beat relegation-threatened Queens Park Rangers to secure a first league title since the sixties.

What seemed like a straightforward afternoon proved anything but.

United had one hand on the title after beating Sunderland 1-0 at the Stadium of Light, as City faltered under the pressure of a title race that went down to the wire, trailing to 10-man QPR as the game entered stoppage-time.

Edin Dzeko’s headed equaliser raised hope but appeared too little too late, until Aguero fired home a winner to dramatically snatch the title in arguably the Premier League’s greatest moment.

“This does not f****** slip” – the words of Steven Gerrard that will forever haunt the Liverpool captain.

Liverpool appeared to be riding a wave of momentum towards a first league title in nearly three decades in 2013/14. Brendan Rodgers side had registered a 10th successive league victory after defeating title rivals Manchester City at Anfield in April 2014.

Inspired by the devastating partnership of Luis Suarez and Daniel Sturridge in attack, Merseyside was awash with anticipation as the club’s long wait for a league title came ever closer to an end.

What occurred, however, was the cruelest twist of fate. Gerrard’s slip allowed Demba Ba to score in defeat to Chelsea, handing City back the title initiative courtesy of a superior goal difference with just two games remaining.

In their very next fixture, a gung-ho Liverpool squandered a three-goal lead to draw at Crystal Palace, whilst City’s flawless six-game winning run to finish the season ensured the Premier League title remained the missing medal in Gerrard’s silverware collection.

Manchester City and Liverpool went toe-to-toe for the title once again in 2018/19, setting unprecedented standards at the top of the division to establish themselves as the dominant forces in English football.

Liverpool headed into the New Year with a seven-point advantage after City’s wobbles over the festive period, but defeat at the Etihad – the Reds only defeat of the league season – offered Pep Guardiola’s side hope of retaining their title.

Between March and May, the leadership changed hands eleven times as both teams charged towards the finish line, though there was precious little drama in terms of slips as both sides racked up victory after victory.

City finished the season with a 14-game winning run, whilst Liverpool managed a streak of nine successive victories of their own. The flawless runs saw the former finish just a point ahead of their title rivals after coming from behind to beat Brighton on the final day.

Liverpool finished the campaign on a club record 97 points, the highest tally of any runner-up in history and enough to win the title in 25 of the past 27 Premier League seasons.