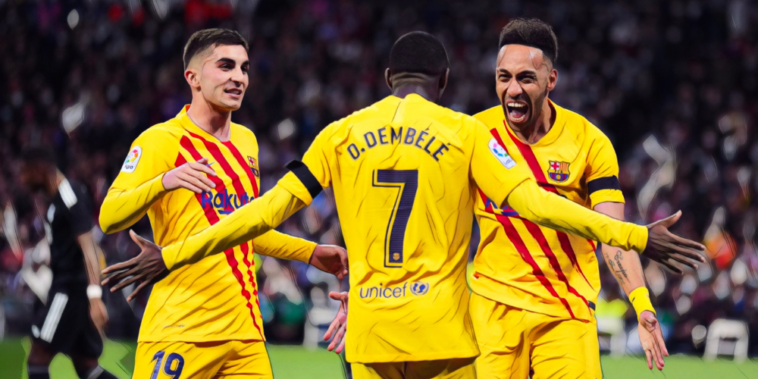 The world stops to watch when Spain’s superpowers collide and the latest instalment of El Clásico failed to disappoint as Barcelona produced a statement result against Real Madrid.

Barcelona thrashed Real Madrid 4-0 at the Bernabeu on Sunday evening, as Xavi’s turnaround of the Catalan side continued with a fifth straight win and an emphatic victory against the league leaders in the capital.

Pierre-Emerick Aubameyang scored twice and created another, with further goals from Ronald Araujo and Ferran Torres earned Barcelona a memorable win against their biggest rivals.

Following the club’s convincing with at Real Madrid, we look back at five of the most memorable El Clásico thrashings of the modern era.

Perhaps the apex of Johan Cruyff’s ‘Dream Team’ at Barcelona, the Catalan’s iconic side produced a sublime performance to humiliate their greatest rivals in January 1995.

Cruyff had starred on the pitch as Barcelona secured a 5-0 win over Real Madrid in 1973 and over two decades later was in charge as his free-flowing side sealed another resounding result against Los Blancos.

Romario stole the headlines with a clinical hat-trick, in a season that saw the Brazilian score 30 goals in 33 league appearances as Barcelona secured a fourth consecutive La Liga title.

Ronald Koeman and Iván Iglesias were also on the scoresheet as Barcelona emphasised their status as Spain’s dominant force and Cruyff’s team outlined their position as one of the greatest club sides European football has seen.

Just less than a year after their embarrassment at the Camp Nou, Real Madrid exacted revenge on Barcelona with a five-star showing of their own.

Michael Laudrup – who had crossed the El Clásico divide to leave Barcelona for Real Madrid – was the inspiration behind an unforgettable triumph as Los Blancos scored five without reply on their way to wrestling the La Liga title back from Catalonia.

Laudrup had decided to leave Barcelona after being controversially left out of the club’s 1994 European Cup final line-up amid the three-foreigner rule, crossing to the capital and becoming the creative catalyst behind Real Madrid’s rise.

Ivan Zamorano scored a hat-trick as the Chilean feasted on Laudrup’s vision and passing range, with further goals from Luis Enrique and Jose Emilio Amavisca putting the gloss on a huge win for the capital club.

Barcelona moved within touching distance of a first league title since 2006 with a 6-2 thrashing of Real Madrid in 2009, a result which edged the club closer to the championship during Pep Guardiola’s first season in charge.

Real Madrid had found themselves 12 points behind Barcelona following a 2-0 loss at the Camp Nou in November, but a run of 52 points from 54 available had closed the gap to just four with five games remaining.

📅 #OnThisDay in 2009, @FCBarcelona went to the Bernabeu for the first time under Pep Guardiola.

Hopes were high ahead of a must-win clash for Real Madrid, but the home side were blown apart by a scintillating performance from Barcelona.

Thierry Henry and Lionel Messi each scored twice, as the Catalans became the first team to score six goals in an away El Clásico.

Carles Puyol and Gerard Pique also scored in a stunning win for Barcelona, who went on to claim a historic La Liga, Copa del Rey and Champions League treble under Guardiola, the first season of an unforgettable era of success.

Real Madrid arrived at the Camp Nou in optimistic mood in November 2010, with renewed hopes of regaining the title that had headed to Barcelona in each of the past two campaigns.

Jose Mourinho had guided Los Blancos to the top of the table after arriving from Inter Milan in the summer, whilst the pre-game talk surrounded the meeting between Cristiano Ronaldo and Lionel Messi as the world’s two best players went head-to-head.

Barcelona demonstrated the class that had made the Catalans the division’s dominant force, however, with Messi the architect of a 5-0 win for the home side.

Messi then stole the show with assists for David Villa to score Barcelona’s third and fourth goals after the break, a fifth coming through substitute Jeffren before Sergio Ramos was sent off in stoppage time.

The defeat was the first time a Mourinho-managed side had lost a game 5-0 and helped Barcelona to the 2010-11 La Liga title. Guardiola’s side also added a second Champions League title in three seasons, beating Real Madrid in the semi-finals.

Barcelona stunned Spanish football with a 4-0 win at Real Madrid this week, a shock result as the improving Catalans upset the league leaders in incredible fashion.

Real Madrid had won the previous five Clásicos as Barcelona’s fortunes have deteriorated in recent seasons and are nine points clear of Sevilla at the top of the La Liga table.

Barcelona are third having shown signs of recovery under Xavi, who has lost just one of his 16 league fixtures in charge of the Spaniards.

Pierre-Emerick Aubameyang – a free transfer arrival from Arsenal in January after finding himself unwanted at the Emirates – produced a brilliant performance in his first Clásico, scoring twice and creating another with an audacious assist into the path of Ferran Torres.

Torres’ goal and a header from Ronald Araujo saw Barcelona run riot at the Bernabeu, with Xavi refusing to rule out a late charge for the title given his side’s strong form, despite a 12-point gap to the league leaders.