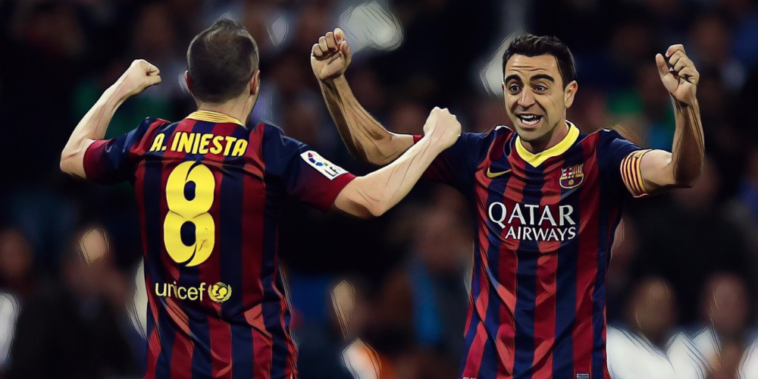 The mastering of the midfield has been a fascination for managers past and present, the centre-piece of a successful side and the area where domination is so often translated into tangible results.

For Pep Guardiola, one of the greatest footballing minds of this or any era, midfield has become an obsession, ignoring regular conventions and forwards to shoe-horn additional midfielders into his side and exert even greater levels of control.

It’s fair to say that Guardiola knows a midfield talent when he sees once, with his first glimpse of Andres Iniesta having become an anecdote regularly regurgitated when discussing the Spanish great.

Having watched Iniesta for the first time as a member of Barcelona’s academy system, Guardiola turned to then teammate Xavi with a message of what the future may hold for the senior side.

“You will replace me, but watch out for this young guy because one day he will retire us all,” he confidently predicted.

Guardiola’s forecast that Iniesta was heading to the summit of the game was unerringly accurate, but thankfully for a generation of football fans it did not come at the cost of Xavi’s role in the side, instead providing the game with one of the most iconic partnerships football has witnessed.

It is difficult to mention one of Xavi or Iniesta without innately making reference to the other, such was their beauty in brilliant tandem during the most successful period in Barcelona’s illustrious history.

Xavi was the first to make his mark, his talents honed in the unrivalled education that is La Masia, before being handed his debut as a teenager against Lleida in March 1998.

The midfielder – diminutive in stature but decisive with the ball at his feet – broke into a team consisting of global stars including Luis Figo and Rivaldo, with his debut campaign resulting in La Liga title success for Louis van Gaal’s side in 1998/99.

The following years proved barren, however, and it would be six seasons before Barcelona were next crowned champions, with Xavi attracting criticism during a turbulent period both on and off the pitch in Catalonia.

By the time that drought-breaking title in 2004/05 had arrived at the Camp Nou, Xavi had been joined in the first team by another La Masia graduate, Iniesta.

Born south in Fuentealbilla before being inducted into the Barcelona system, there were few better exponents of the principles that defined the Catalans’ ideologies than Iniesta, his futsal background allowing the midfielder to flourish in the receive, pass, offer, receive, pass, offer repetition.

Whilst the duo would later become the defining midfield players of an entire generation, there were doubts initially over their ability to feature in the same side, the combination of two creatives with limited athleticism deemed a luxury during their early seasons in tandem.

The first of the pair’s four Champions League winners’ medals came with both named amongst the substitutes, with Frank Rijkaard preferring a more combative pairing of Edmilson and Mark van Bommel for the final against Arsenal in Paris.

Xavi failed to feature with the midfielder nursing an injury, whilst Iniesta was introduced at half-time with Barcelona trailing, the midfielder involved in the equaliser as the Catalans came from behind at the Parc des Princes.

Pep Guardiola’s appointment as Barcelona manager in 2008 is widely viewed as the catalyst behind the rise of the Xavi-Iniesta axis, and whilst there’s little disputing his role in transforming perceptions, that summer saw the pair help end Spain’s long wait for success on the international stage.

For so long, Spain had been one of football’s great underachievers, without a major success since 1964 and unable to translate talent and domestic league strength into success on the international stage.

La Roja’s wait, however, was ended at the 2008 European Championship as Luis Aragones centred his side around their collection of gifted midfield magicians, with Spain producing some spellbinding football to be crowned as champions.

Xavi was named as the Player of the Tournament with Iniesta selected amongst Euro 2008’s finest footballers, with the duo combining for the semi-final opener as the latter crossed for the former to convert against Russia.

Xavi was again crucial in the final after threading through Fernando Torres for the game’s only goal against Germany, a moment which ended decades of frustration and heralded a new era in which possession – perhaps more than ever before – ruled above all.

Spain’s success had kickstarted an ascent towards iconic status, but back at club level the Xavi and Iniesta partnership became the embodiment of tiki-taka.

As the mesmeric metronomes of Barcelona’s brilliant brand of football, the Catalans conquered all before them during Guardiola’s fabled first season in charge; La Liga, Copa del Rey, Champions League.

Iniesta had scored a stunning stoppage-time equaliser as Barcelona beat Chelsea on away goals in the Champions League’s last four, but it was the manner of their football that will be most remembered, captivating and complete control of almost any opponent, suffocating sides with purposeful and patient possession.

The trophies continued at a relentless pace and the football became ever more alien, passages of play from another planet as Iniesta and Xavi combined at the heart of arguably club’s football’s finest ever side.

Once debated as a duo, the two became synonymous with one another, each rarely wandering far from the other’s radar as two masters of their profession exposed and dissected opposition sides.

“People used to ask ‘Xavi or Iniesta?’ and Pep would say ‘Xavi and Iniesta’,” Lorenzo Buenaventura, a long-term assistant of Guardiola explained when discussing the duo.

“Both of them. Not one or the other. Together always. People said they couldn’t play together, but that’s not true. They shouldn’t be played apart.”

Perhaps their greatest moment came during the 2011 Champions League final, a performance which cemented Guardiola’s Barcelona as a team that few will ever forget.

Manchester United – into their third Champions League final in four seasons – were the opponents at Wembley, though departed defeated and dominated following a masterclass from a side at the peak of their powers.

That success came one year on from Spain’s victorious World Cup campaign in South Africa, where even in the absence of the genius Lionel Messi brought to Barcelona, Xavi and Iniesta proved their status as two of the game’s greatest talents.

It was Iniesta who delivered the moment, netting the decisive goal in Johannesburg as Spain’s pass masters were crowned world champions after a bruising final match-up with the Netherlands.

Whilst the two have scaled incredible heights as the perfect partnership, their styles differ – creating a combination unlikely to ever be repeated.

Xavi was so often the dictator, the brain of club and country, finding space in the midfield and setting the rhythm of the game, creating angles and opportunities with incisive passes of absolute accuracy.

🗣️ Xavi Hernández: "We need to be always asking where is the free player, where is the space. This is the Barça DNA and the best way to have success."@FCBarcelona | #UCL pic.twitter.com/JylIR6JWkM

Iniesta was equally brilliant when in possession, though brought a more balletic poise than his compatriot, capable of opening up the game with one-touch football or as equally with slaloming run through opposition challenges.

His signature move, La Croqueta, was practised to the point of perfection, shifting the ball swiftly from one foot to the other as he glided through outstretched legs.

Euro 2012 saw Spain defend their title as European champions, becoming the first team in history to win three major international competitions in succession, with Iniesta following in Xavi’s footsteps after being named the tournament’s finest talent.

Their influence was once again supreme as La Roja beat Italy 4-0 in an emphatic final success, Iniesta named man of the match as the Spanish rewrote records in convincing fashion.

Xavi (212) and Iniesta (207) made more passes into the final third than any other players at Euro 2012, the dovetailing duo dominant in another supreme success.

The following three seasons saw Barcelona’s yin and yang continue to make a mockery of midfields, before Xavi replaced his long-time teammate in the 2015 Champions League final, adorning the colours of Barcelona for one last time.

The final ended in a 3-1 win over Juventus as Luis Enrique’s side claimed a historic treble, a fitting conclusion to a Catalan chapter that will be revisited by football fans for decades to come.

Xavi and Iniesta were the prominent figures in a golden age for both Barcelona and Spain, orchestrators of the finest sides seen this century and the genius behind a defining era in which technical talents reigned.