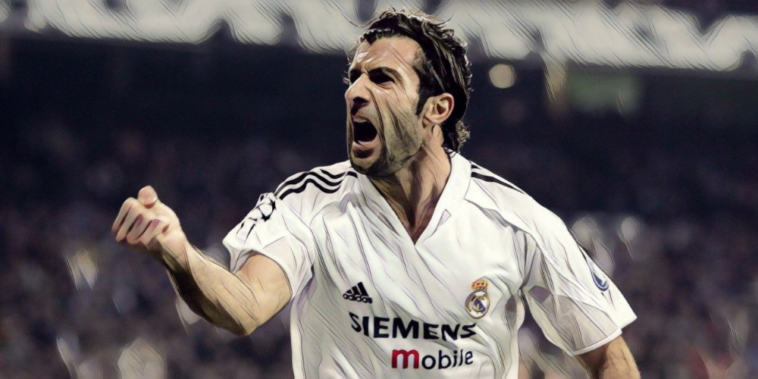 Luis Figo’s footballing ability alone would have been enough to cement his place in the eternal memories of the global game.

Figo’s fabulous footwork made him one of the best creative talents of a generation, a winger who beat defenders with an effortless ease and who won – and broke – hearts at some of Europe’s biggest football clubs.

Figo’s tale is one of talent, treachery and a whole lot in between, the figurehead of Portuguese football’s Golden Generation and a man who launched the Galactico era, bringing in the new millennium with one of the most unforgettable transfers of all time.

Born in a working-class district of the city of Almada, located south of the Tagus River from Lisbon, his precocious talents were soon spotted in the capital as Figo was inducted into the hallowed academy of Sporting.

Having honed his fleet-footed talents in futsal before making the move into the Sporting system, he rose rapidly through the ranks to make his debut as a teenager, coming on as a 17-year-old in a 1–0 home win against Marítimo in April 1990.

The 1991/92 campaign saw Figo earn his regular breakthrough into the side and senior honours with Portugal soon arrived.

He had earlier formed part of the u20 team that won the 1991 FIFA World Youth Championship, featuring alongside future international teammates Rui Costa, Joao Pinto and Jorge Costa, before making his senior debut against Luxembourg in October.

At club level he continued to grow in influence at Sporting with the hallmarks of his game shining through. Fast feints to leave defenders for dead became a trademark, whilst an ability to create chances soon saw interest arrive from abroad.

In 1995, he found himself at the centre of a dispute between Juventus and Parma. Sporting had agreed his hushed sale to the former, though Figo’s displeasure with the manner of the deal saw him instead sign a pre-agreement with Parma.

What ensued was a chaotic contractual situation that resulted in a two-year ban on Italian sides from signing the winger. Barcelona capitalised, agreeing a £2.25 million to bring Figo across the border.

Arriving as a replacement for Michael Laudrup at the Camp Nou, the move to Spain saw Figo’s star continue its ascent.

He arrived under the management of Johan Cruyff, but shone brightest following the exit of the iconic Dutchman, following in the footsteps of his former boss to become an adopted Catalan and beloved Barcelona figure.

Ladies and gentlemen, presenting one of the finest wingers in #LaLiga history… @LuisFigo! 🔝 pic.twitter.com/rcfgYh05YK

Figo’s role was crucial in the club’s Copa del Rey and Cup Winners’ Cup double in 1996/97, scoring eight goals, including a brace as Barcelona twice came from behind to beat Real Betis in the former final.

The following season saw league and cup success arrive, as Figo captained the side to a domestic double under Louis van Gaal.

Recognised as one of the game’s great talents, his status in Catalonia was at huge heights. Adored on the terraces, he became an embodiment for the fans having embraced all things Barcelona, despite his roots having been more than 1000km to the west.

Then, in the summer of 2000, his reputation changed irreversibly.

Florentino Perez had made the bold promise that he would sign Figo should he be elected as president of Real Madrid, which when it came to fruition led to arguably the most controversial transfer of all time.

Figo – having shone for Portugal at Euro 2000 and headed towards the Ballon d’Or – did the unthinkable and signed for Real Madrid.

A world-record fee saw Figo released from his contract and cross the El Clasico divide, the animosity between the clubs reaching unprecedented levels. Barcelona, betrayed, saw their figurehead leave for their fiercest rivals, watching on with horror as a man who had represented their values chose to side with the eternal enemy.

For Perez it was the start of a vanity project that became know as the “Galactico era’ and saw the sport’s superstars head to Real Madrid. Figo was the first, before Zinedine Zidane, Ronaldo and David Beckham all took their turn in being paraded at the Bernabeu in successive summers.

Figo’s first season ended with the capital club crowned champions and the Portuguese playmaker was at the centre of their success, scoring 14 goals.

After winning the Ballon d’Or in 2000, he picked up the FIFA World Player of the Year award in 2001, recognition of his standing as one of the planet’s finest footballers.

His first return to the Camp Nou was unmissable viewing, one in which he refused to take corners amid the deafening sound of boos, whistles and expletives as missiles reigned onto the Camp Nou pitch.

Zidane’s arrival saw the duo share the creative burden for Los Blancos and the 2001/02 campaign ended with Champions League success. Zidane’s outrageous volley secured a final win over Bayer Leverkusen and Figo got his hands on Europe’s biggest prize – tangible justification for his defection.

Any hopes that the ill-feeling towards Figo that had reached boiling point might simmer proved incorrect, with his return to the Camp Nou in November 2002 etched into football history.

Again the Barcelona fans poured out their hatred in an atmosphere of animosity and anger in Catalonia, with objects raining onto the pitch in the direction of the Real Madrid winger.

Among them, in what has become iconic imagery, was a pig’s head – a symbol of the perceived greed that led Figo to swap his star status at Barcelona for Real Madrid’s riches.

He departed after a frustrating final season at the Bernabeu and signed for Inter Milan on a free transfer.

A quickness of mind compensated for slowing legs across four seasons in Italy, in which he claimed four consecutive Scudetto as Inter dominated the division in the wake of the Calciopoli scandal.

Figo called time on an illustrious career in 2009, one which had seen him become the leader of Portugal’s Golden Generation. He won 127 caps and scored 32 goals for the national side, but was unable to lead the nation to a maiden international success.

He was the inspiration behind a thrilling group stage comeback against England in the former tournament, scoring a long-range effort as Portugal came from two goals down to win.

Figo’s biggest disappointment with Portugal came at Euro 2004. On home soil, it was a tournament that was particularly painful for Figo, who saw his side’s dreams shattered with a shock loss to surprise finalists Greece in Lisbon.

During the game, a pitch invader threw a Barcelona flag in Figo’s direction, the ill-feeling still surfacing four years later.

Figo’s best saw him celebrated as one of the game’s greats, a winger with close control, creativity and a delightful directness to leave defenders wrong-footed and rushing to recover.

He was the name who ushered in the Galacticos, the first domino for an era that lives long in the memory at Real Madrid as a fantasy footballing side was assembled.

That his exit still creates such anger in Barcelona is because of the magnitude of his one-time importance to the Catalan cause. He was a leader, magnificent on the pitch and symbolic off it.

That world-record crossing of the El Clasico divide has become the overriding narrative of Figo, but the reasons Real Madrid made their move in the first place is what should truly be remembered.

At his best he had few peers, a gloriously gifted footballer who helped define a decade.