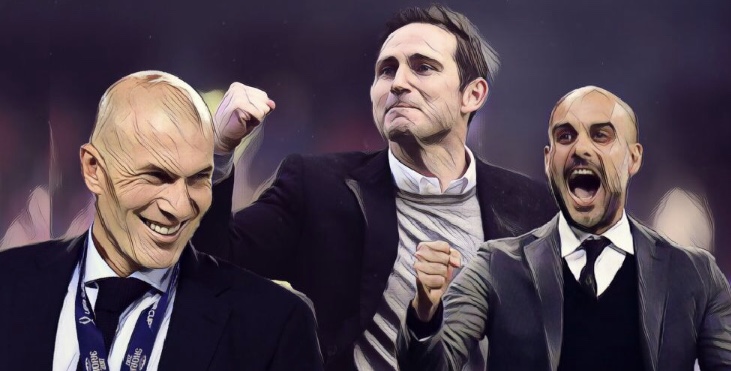 Can Frank Lampard learn anything from other club legends who went back to manager their former teams?

Frank Lampard was recently confirmed as Chelsea’s latest manager. The former midfielder is coming off the back of his first year in management, during which he guided Derby County to the playoff final at Wembley, losing out on promotion to Aston Villa, as well as knocking Manchester United out of the League Cup third round on penalties.

It’s impossible to judge on that one campaign whether or not Lampard is good enough to take the reins at a major Premier League club yet or not. He took a club that was in or around the top eight in the Championship and got them to sixth place, which doesn’t exactly scream Next Top Manager.

The one thing the ex-Chelsea man has going for him is exactly that — he is a club legend held in high esteem not just by the supporters, but the hierarchy too. He is reportedly being given at least two transfer windows to rebuild the squad, which means with the transfer embargo in place he will have two years in charge guaranteed.

Blues bosses are usually given no assurances as to their job security and last only so long in the hot seat. Maurizio Sarri won the Uefa Europa League and returned the club to Champions League football, but he was a dead man walking long before the season drew to a close.

Being a club legend brings with it a certain cache that other prospective managers just don’t have, making them attractive candidates even if they don’t have the same level of experience and success. That is part of the reason why Manchester United were so willing to give Ole Gunnar Solskjaer the job on a permanent basis, despite his lack of big club experience when compared to his predecessor.

Jose Mourinho had become an increasingly divisive figure at Old Trafford by the time he was sacked in December, and the Norwegian was the perfect tonic to that toxicity. The incredible initial run of form under Ole was then followed by a wretched string of results, and a feeling of angst has set in amongst the United faithful as to whether it was right to give the job to a man whose only previous managerial roles have been at Molde FK and Cardiff City.

Even that, however, is a great deal more than what Lampard’s CV has to offer. Either way, these facts are not self-evident in and of themselves as proof that neither man is incapable of managing at the highest level. Every coach must start somewhere before they get to the top.

As we will get into in a moment, three club legends in this article won the Champions League without having previously taken care of a major club, two of which were only in their first year of senior management having only coached youth sides beforehand.

So for some teams hiring the heroes of their supporters can have tremendous upside, but sometimes it can go horribly awry.

Ten club legends who managed at their former clubs:

When King Kenny was first installed as Liverpool manager in 1985, he wasn’t even a legend from the past coming back to take over — he was still a player, and would remain so on a part-time basis while managing the team.

While such a scenario could hardly be envisaged at such a big club in the modern era, the transition was seamless and the Reds won the league title in their first year under Dalglish. He would lead them to another two in ’88 and ’90, before leaving the club out of the blue in 1991.

Liverpool haven’t finished on top of the league ever since and to this day Dalglish’s win rate of 60.9% is the highest in the club’s history. The less said about his return in 2011/12 though, the better.

Read: The five managers with the most wins in Premier League history

The Scot’s successor was another Liverpool legend in the form of Graeme Souness, who had been player-manager at Rangers for the previous five seasons. The Merseyside outfit’s previous three managers had been Bill Shankly, Bob Paisley and Kenny Dalglish, who had each guided the club to either the league title or the European Cup or both during their respective stints.

The succession plan was unfathomably fruitful, but that ended with Sounness, who could only win a solitary FA Cup in 1992. Jamie Carragher supposedly said that it was Souness, and not Alex Ferguson, who “knocked Liverpool off their fucking perch”, although the former Newcastle and Blackburn manager later said that Carragher told him he did not say that.

Whether or not those words were uttered is irrelevant, as Souness was ultimately the one who broke the cycle of success.

With the club in a desperate situation, Alan Shearer stepped in to help his old club by becoming interim manager in April 2009. In his eight games in charge, however, Newcastle United won just one and were relegated to the Championship.

Shearer didn’t sour his reputation quite in the same way as, say, Steve Staunton did as the Ireland manager, but it was a sad way for the season to end for all concerned.

Roberto Martinez spent more of his playing career in Britain than he did in his native Spain, lining out for teams in England, Scotland and Wales. He spent six years at Wigan, his longest stint at any club, where he became a bit of a cult figure in the nineties.

In 2009 Martinez returned to the Latics as manager, saving them from the drop in dramatic circumstances for three consecutive seasons. They were eventually relegated in 2013, but by then he had achieved the unthinkable by guiding the club to FA Cup glory.

A Chelsea player for six years during the pre-Abramovich era, Roberto Di Matteo was in the right place at the right time when Andre Villas-Boas was sacked in 2012.

As the Portuguese’ assistant, the Italian was given the job on an interim basis, before leading the Blues to their first Champions League success by somehow overcoming Napoli and Barcelona before defeating Bayern Munich in their own stadium in the final.

On top of that, Di Matteo won the FA Cup to complete a remarkable double. All this from a man who was sacked by West Brom. He was made permanent manager for the following season, but was gone by November with the club eliminated from the competition they just won a few months previously.

Chelsea never agreed a pay-off settlement with their former manager, so he continued to get paid until June 2014 unless he got a new job before then. Predictably, he did not find a new one before then.

I’m not sure if you know this, but Martin O’Neill won two European Cups as a Nottingham Forest player. You mightn’t have heard, because it’s not as if he mentions it at every opportunity…

Such legendary status was not enough to keep him in the Forest job for longer than five months when he failed to get the club into the playoffs last season. O’Neill’s style of play was unpopular with the fans, while players were reportedly unimpressed by his methods.

There may be no greater influential figure in football than the late, great Johan Cruyff. The Dutchman, espousing the philosophy of Total Football, was an exceptional player who deserves to be in the same pantheon as Diego Maradona and Lionel Messi, but it was as a manager that he had his biggest effect on the game.

Cruyff took over Ajax in the mid-eighties, winning the Uefa Cup Winners’ Cup in 1987, before taking over at Barcelona. It was there that he curated the ‘Dream Team’ that went on to win the club’s first European Cup in 1992. His methods would influence one of his players, Pep Guardiola, to continue the tradition of fluid possession football at the Nou Camp and beyond.

Read: 20 of the best quotes about Johan Cruyff

When Pep Guardiola was made manager of Barcelona in 2008, there was consternation over why he had been chosen over Jose Mourinho. The Catalan had, after all, no experience in senior management to speak of. He had led Barcelona B to success, but that was a mere reserve team. A club legend he may be, but how could he be picked over the credentials of someone like Mourinho?

It turned out to be the best decision La Blaugrana ever made, as they went on to win two Champions Leagues and probably should have won four on the trot. Pep brought back the high pressing, possession style of Rinus Michels and Johan Cruyff that the club was once known for and he was incredibly successful while doing so.

Undoubtedly the greatest example of a club legend taking over his former team without having much of a grounding in management and being successful anyway, Zinedine Zidane is Real Madrid’s answer to Pep Guardiola.

The Frenchman took over from Rafael Benitez in January 2016 when he was simply the most convenient hiring at the time, but he went on to win three consecutive Champions League trophies. His only previous experience had been an unremarkable spell in charge of Real Madrid Castilla, although he was assistant coach to Carlo Ancelotti when the club won the Champions League in 2014.

Before becoming one of the most decorated managers in the history of football, Carlo Ancelotti was a talented footballer who won consecutive European Cups with AC Milan. Although he might be more of an AS Roma man, having spent 12 years there, his playing career will always be remembered for that successful stint at the Milanese outfit.

Ancelotti would double his haul of Champions League medals after becoming the manager of the Rossoneri, winning the trophy in 2003 and 2007. He built an astonishing team that featured the likes of Andrea Pirlo, Filippo Inzaghi, Clarence Seedorf and, later, Kaka, who won eight trophies in eight seasons.

Almost every AC manager for the last decade

After failing to qualify for the Champions League this season, AC Milan decided to let go of Gennaro Gattuso as their manager. The Italian’s reign lasted just two seasons and was slightly more stable than many of those that have preceded him in the past ten years, but that’s not saying a lot.

Since Carlo Ancelotti left in 2009, Milan have had eight different managers (Marco Giampaolo will be their ninth after being confirmed as the latest hiring). Five of them were beloved former players of the club; Leonardo, Clarence Seedorf, Filippo Inzaghi, Cristian Brocchi and Gattuso. All their tenures could be described as failures.

The Rossoneri have won just one league title in that period, which came under Max Allegri in 2012, who was sacked in 2014 and later took over at Juventus, where he won five consecutive Scudetti. Typical.

Milan has a history of installing club legends as managers, such as Fabio Capello, Giovanni Trapattoni, and Nils Liedholm, who took charge on three different occasions in three separate decades.