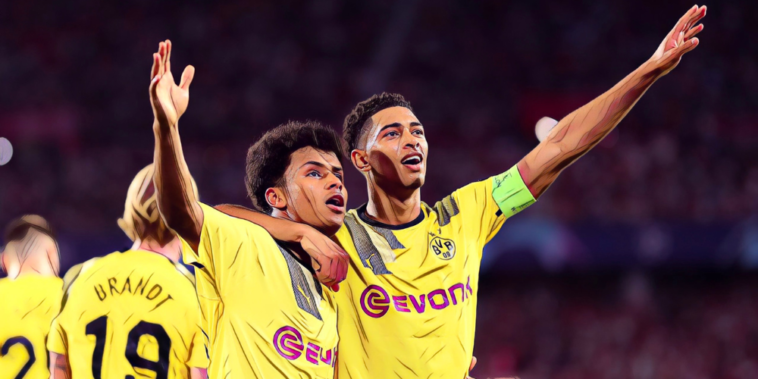 Our weekly Champions League awards honour the best – and worst – of the midweek European action.

On the evidence so far, no team will want to face Napoli in the knockout stages of this season’s Champions League.

Luciano Spalletti’s side continued their cruise towards the last 16 with a statement performance at Ajax, as the Italian league leaders hit the Dutch champions for six in Amsterdam.

Giacomo Raspadori scored twice as Napoli came from behind to humiliate Ajax and continue a sublime start to the season. Having already thrashed Liverpool and Rangers, Napoli made it three wins from three with a ruthless attacking performance as their young side – unbeaten in all competitions this season – punished Ajax in exhilarating fashion.

Napoli have the most points, goals and shots in both Serie A and the Champions League this season.

Time to start talking about them as contenders 🔥 pic.twitter.com/2EZrRRASha

Napoli’s performance was the sort to make the competition sit up and take notice, as the Gli Azzurri inflicted Ajax’s biggest-ever European defeat and largest in any competition since 1964.

Brimming with confidence and quality in the final third, the likes of Raspadori and the effervescent Khvicha Kvaratskhelia are shining this season, With Victor Osimhen still to return to this side, optimism is increasing in Naples.

The midfielder became the first English teenager to captain his side in the Champions League this week and responded to the responsibility with a brilliant individual performance at Sevilla.

Bellingham created the opening goal with a fantastic switch off his weaker left foot, before doubling Dortmund’s advantage with a superb solo goal as he drove into the box before guiding a finish into the far corner.

Just two players have ever captained a Champions League side at a younger age than Bellingham (19 years and 98 days old), while no English player has provided more assists in the competition (4) since the start of last season.

It is going to take an almighty fee to prize the teenager from the Westfalenstadion, as Europe’s elite lineup for a special talent.

“What he’s doing, in his position at his age we haven’t seen,” Rio Ferdinand gushed to BT Sport.

“The best of our generation, Lampard, Gerrard, Scholes, Vieira, Keane… They weren’t doing this!

“He’s still got to go on and prove it over a long period of time, but they weren’t doing what he is doing right now. Influencing games at this level. Captaining a team at this level. He’s the full package. Mentally, this kid’s a beast.”

Is there a more archetypal Lionel Messi goal than this?

The neat interchange, the explosive acceleration and a nonchalant finish bent into the far corner with effortless ease.

It’s now 15 goal involvements in 12 Ligue 1 and Champions League games for Messi this season and Paris Saint-Germain’s hopes are pinned largely on a footballer still capable of making the difficult look routine.

Group B is shaping up as one of the most fascinating battles for qualification, as Porto, Atletico Madrid and Bayer Leverkusen jostle for position behind surprise leaders Club Brugge.

Porto got their campaign up and running after beating Leverkusen this week, though needed a strong performance from Diogo Costa to keep them in the contest.

The 23-year-old made a vital save from Patrik Schick’s – admittedly tame – penalty with the game goalless, following VAR controversy at The Estádio do Dragão. His strong hand could prove a defining moment for Sérgio Conceição side and their pursuit of a place in the last 16.

Bayer Leverkusen were denied a penalty and Porto went on to score on the counter attack.

The referee pulls back play and eventually awards Leverkusen a penalty.

Patrik Schick then misses from the spot 😩#UCL pic.twitter.com/V0z5K6d313

Lionel Messi extended a personal Champions League record this week, as Benfica became the 40th different opponent to suffer at the hands of the all-time great.

Messi is now two clubs clear of Ronaldo after scoring against Maccabi Haifa and Benfica this season, with the latter his 127th goal in the competition – 13 behind Ronaldo as the Champions League’s leading scorer.

Only 17 players have scored 40 goals in the competition's entire history. 😂

The Norwegian goal-machine added two more to a total rising rapidly each week, moving to 19 goals for the season in all competitions in early October.

Pep Guardiola withdrew the forward at half-time with Manchester City cruising against Copenhagen, but not before Haaland had scored a brace to further increase the weight of evidence that may not be entirely from this planet.

“I’ve never witnessed anything like it in my life. For the second goal I was just laughing, he’s always there. When i was walking back from one of the goals the keeper said to me, ‘this guy, he’s not human!'”.

The Sporting Lisbon shot-stopper had the stinker of all stinkers this week, as the Spaniard compiled his own personal catalogue of goalkeeping gaffes on one night at The Stade Vélodrome.

Sporting arrived in France as the group leaders after back-to-back wins and took an early lead through Francisco Trincão’s first-minute goal, but Marseille levelled soon after following Adan’s opening error.

The goalkeeper was hesitant in possession as Alexis Sanchez chased him down, with his late clearance ricocheting off the Chilean and in for an equaliser. Another hopelessly hit clearance then gifted Marseille possession for the host’s second, before his disasterclass was complete with a first-half red card, sent off for handling outside his area.

It’s hard to think of a more comical cameo in Champions League memory.