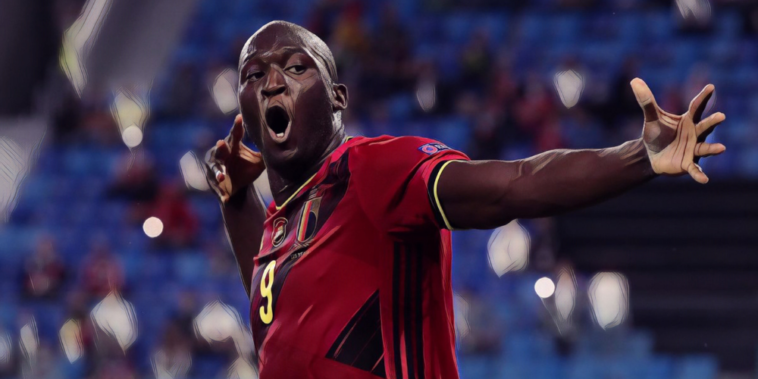 Romelu Lukaku re-emphasised his status as one of Europe’s finest forwards during Belgium’s Euro 2020 group opener, scoring twice as the Red Devils made a winning start with a comfortable 3-0 victory over Russia.

Lukaku’s double saw him extend his record as Belgium’s record scorer and take an early lead in the race for the tournament’s Golden Boot, continuing his form from a career-best season at Inter Milan.

The 28-year-old’s brace also saw him move to 313 career goals, an incredible haul for a player whose best years may still be to come.

We’ve decided to breakdown Lukaku’s career to date and his 313 career goals.

Lukaku came through the academy system at Anderlecht and made an immediate impact after being handed his debut as a 16-year-old, his first full season seeing the forward finish as the leading scorer in the division.

The teenager’s 15 goals helped Anderlecht win the title in comfortable fashion, whilst he added a further four in Europe.

Lukaku bettered that haul with 20 goals in all competitions during the 2010/11 season to attract interest from Europe’s elite sides, and after starting the following campaign with two in two he made a move to Chelsea for an initial fee of £10m.

Lukaku left Anderlecht as an 18-year-old but with an incredible record of 41 goals in 98 appearances and the Belgian has spoken previously of his desire to return before the end of his career.

Lukaku was handed only limited opportunities at Chelsea and started just one league fixture for the west Londoners, the teenager loaned out to West Brom to continue his development during the 2012/13 campaign.

It proved a fruitful move for both club and player as Lukaku enjoyed a superb season at The Hawthorns, scoring 17 league goals in just 20 starts to fire the Baggies to an eighth-placed finish in the Premier League, their highest top-flight finish since 1981.

Lukaku’s final appearance for the club saw him come off the bench to score a hat-trick in a thrilling 5-5 draw with Manchester United, in what was Sir Alex Ferguson’s 1,500th and final game in charge of the Red Devils.

West Brom had hoped to extend Lukaku’s spell at The Hawthorns, though the blossoming forward instead signed for Everton on deadline day in a similar season-long loan deal from Chelsea.

He proved an instant hit on his debut with a winner against West Ham and failed to stop scoring in an Everton shirt, finishing his debut campaign with 16 goals in all competitions, performances which persuaded the Merseyside club to purchase the youngster in a £28m club-record deal.

That fee proved a shrewd investment as the Belgium international continued to flourish at Goodison Park, reaching 20+ goals in all competitions in three consecutive campaigns after his permanent move.

His final season saw him net a career-best 26 goals, leading the race for the Premier League’s Golden Boot until being overhauled by Harry Kane across the final two fixtures of the season.

Lukaku’s goal record – scoring 87 goals in 133 starts – led to continued links with Champions League sides however, with Manchester United splashing out a huge £75m to take the star to Old Trafford in 2017.

Signed by former Chelsea manager Jose Mourinho, Lukaku enjoyed an impressive first season following his big-money move to Manchester, scoring 27 goals in all competitions as the Red Devils finished as runners-up in the Premier League.

His fortunes faltered during a second campaign which saw Mourinho sacked and replaced by Ole Gunnar Solskjaer, with criticism surrounding his all-round game as he lost his place as an undisputed starter in the side.

Despite an impressive goal-per-game ratio during his time with the club, his falling out of favour saw him depart at the end of the 2018/19 season, signing for Inter Milan for a fee of £73m.

It’s fair to say there was criticism of Lukaku ahead of his move to Inter Milan, with the Belgian facing the sizeable task of replacing Mauro Icardi at the San Siro and facing jibes over his work-rate and first touch towards the end of his Premier League career.

Lukaku has delivered and then some for Inter since his arrival in Italy, breaking the record of Ronaldo Nazario as the fastest player in the club’s history to reach 50 goals in all competitions – achieving the feat in just 70 appearances.

The Belgium international has evolved into one of the most complete out-and-out centre-forwards in the game during two seasons in Serie A, with his performances firing Inter to a first league title in 11 years during the 2020/21 season.

Lukaku finished as the second leading scorer in the division behind only Cristiano Ronaldo with 24 goals, whilst he also ranked second for assists after providing 11 goals for his Nerazzurri teammates.

Lukaku looks fitter, faster and more clinical than ever before, an intimidating prospect for Italian football’s best defences.

Belgium’s all-time record goalscorer and by some distance, Lukaku has spearheaded a Golden Generation of talent for the Red Devils who will be looking to end the nation’s wait for a major tournament at Euro 2020.

Lukaku made his debut as a teenager and has since amassed a record of 62 goals in just 94 caps, a figure that has seen him level the likes of Zlatan Ibrahimovic and Ronaldo Nazario for international goals.

The 28-year-old’s haul is almost double the total of the country’s second highest goalscorer, Eden Hazard (32 goals), and a tally that only seems set to continue rising as FIFA’s number-one ranked nation pursue major honours.

Lukaku incredibly became his country’s record scorer at just 24-years-old and he continues to enhance his legacy at international level, his double against Russia last week moving him joint-eighth in the rankings of active international goalscorers, with Luis Suarez, Robert Lewandowski and Neymar next in his sights.