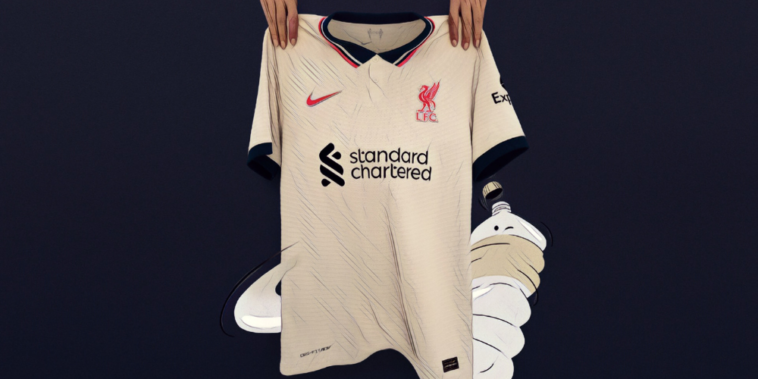 Premier League football is right around the corner and throughout the summer we’ve been introduced to the new kits each side will wear for the forthcoming campaign.

Football fans are always eager to get a glimpse of their side’s latest offering, with each of England’s top-flight sides having released brand new kits for the 2021/22 season.

Ahead of the season’s opening fixtures we’ve picked out five of the best offerings so far, here are our rankings of the five best away kits for the 2021/22 season.

Aston Villa enjoyed an impressive summer despite the exit of Jack Grealish to Manchester City, with exciting summer signings including Emiliano Buendia, Leon Bailey and Danny Ings set to line-up in this clean-looking away shirt in 2021/22.

The white shirt contains claret pinstripes and detailing, with this season’s offering from Kappa an ode to the club’s 1982 European Cup-winning vintage, commemorating the 40th anniversary of Villa being crowned champions of Europe.

The kit will be completed with claret shorts and white socks, as Dean Smith’s side look to bring European football back to Villa Park this season.

Manchester City have also opted for a white away shirt for the 2021/22 season, with the kit seeing the club partner with water technology company Xylem to help promote water sanitation, hygiene, and clean water access for in-need communities around the world.

The clean look of the white is complimented by multi-colour accents and sponsorship, with Etihad one of the Premier League’s best aesthetics in a division packed with ugly sponsorship at present.

City wore their new away number during the Community Shield defeat to Leicester on Saturday, with the full kit including white shorts and white socks – despite an aqua change of shorts being worn at Wembley.

There’s just something about yellow away kits, with Chelsea having opted for a traditional yellow shirt for their fixtures on the road in 2021/22.

Nike have regularly tried outlandish away shirts in recent seasons with some huge hits and notable misses (see Tottenham this season), but the American sportswear giant have landed well with the simplicity of this Chelsea shirt.

The bright colour is added to win smart thin stripes across the jersey and a neat looking collar, though the west London side’s ‘3’ sponsorship could perhaps be scaled down if we’re being picky.

However, this shirt – which will be worn with yellow shorts and black socks – is an undoubted improvement on the club’s kaleidoscope inspired home jersey.

Chelsea yellow is back!

Introducing our 21/22 @nikefootball away kit, with pinstripe hoops nodding to the past, brought into the present by a striking black colourway! 🟡⚫#ItsAChelseaThing pic.twitter.com/CiAZZeBTYZ

Newcastle have been no strangers to truly horrid kits in recent seasons, but this away shirt by Castore is amongst the very best looking shirts in the Premier League in 2021/22.

The sleek grey and black stripes are added to by golden detailing and a tidy white collar, with the latter colouring even managing to vastly improve the unsightly Fun88 sponsorship logo.

Credit to Castore for this one.

Liverpool fans have been calling their new away kit a cult classic in the making following its release, with Nike having bounced back from the daring blue offering of last season with his fine creation.

Inspired by the fan favourite 1996/97 away shirt, Liverpool’s latest look is an off-white stone colour with teal and orange details.

Possessing a button-up collar with teal detailing, this 90’s throwback is a winner.

Crafted in stone, celebrated in style 👌

Our new @nikefootball away kit 🔥

Read Also – 1989 vs 2012: Comparing the most iconic title finishes in English football history