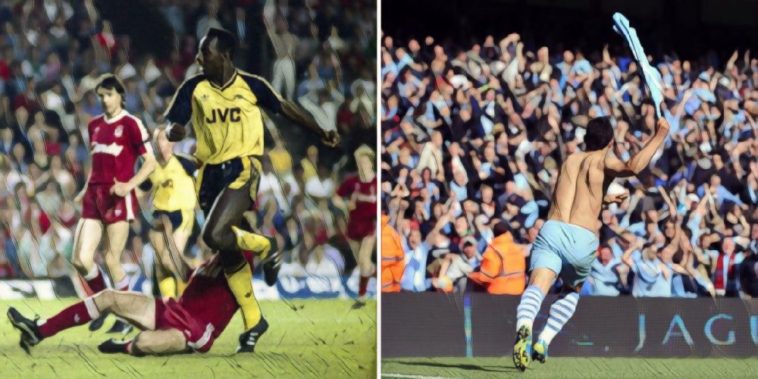 The finish to the 2011-12 Premier League season, in which Sergio Aguero scored the goal which won Manchester City the title with virtually the final kick of the final matchday, is rightly regarded as the greatest Premier League climax in its 29-season history.

By comparison to 2012, the finish to the 1988-89 old Division One season is rarely spoken about, at least outside the conversations of Arsenal supporters and football fans of a much more mature vintage. This can be hard to understand: like 2012, it was decided with virtually the last kick of that year’s season, midfielder Michael Thomas scoring the defining goal in Arsenal’s 2-0 victory over Liverpool at Anfield.

Both title finishes are therefore iconic in their own right. But, if they were to be ranked, which one would come out on top?

The main argument to be made for 1989 is that it was the top two in the league going head-to-head directly to decide the title, the first time that had happened in 100 years.

Interestingly, the game had originally been scheduled for 23 April. Following the April 15 Hillsborough disaster, however, it was postponed, being rescheduled for 26 May, a week after all other top-flight clubs had played their final game.

Liverpool vs Arsenal was therefore effectively a winner takes all clash. Compare this to Manchester City who, while competing with city rivals Manchester United, were playing Queens Park Rangers, a team fighting relegation.

Arsenal were also the clear underdogs. Liverpool were the undisputed best team in England, unbeaten since January 1. They had dominated English football throughout the 1970s and 1980s. In the latter decade alone, they had won five league titles (including the previous season’s), as well as one FA Cup and four League Cups.

By comparison, Arsenal had only finished sixth the previous season, and they had not won the league in 18 years. While the Gunners had spent much of the 1988-89 season top of the league, even finding themselves 11 points clear of Liverpool at one point, a series of bad results in February and March, and in their two games prior to facing the Merseyside club, meant they found themselves 3 points behind with one game to play.

To make matters even harder, the North Londoners needed to win by two clear goals at Anfield, a place where they had not won since 1974 and where Liverpool had not lost by such a margin since a 2-0 defeat to Everton on 22 February 1986, over three years prior.

Very few, if any, had therefore given Arsenal a chance.

What followed was one of the greatest nights in the club’s history. 1-0 up with just a minute to play – Liverpool midfielder Steve McMahon kindly reminded everyone how long was left – Thomas found himself one-on-one with goalkeeper Bruce Grobbelaar, calmly lifting the ball over him into the net to send the travelling Arsenal fans into raptures.

It was an occasion matched by Brian Moore’s commentary, with the words “Thomas, charging through the midfield… Thomas… it’s up for grabs now!” forever etched in the history of Arsenal Football Club.

Going into the final day, City had done the hard work.

Eight points behind Man United with six games to go, they had capitalised on a poor run of results from their neighbours. This included beating them 1-0 at the Etihad, following this up with a 2-0 victory against top-four chasing Newcastle at St. James’ Park thanks to a masterful performance from Yaya Touré.

As a result, they were level on points with their city rivals but with a far superior goal difference going into the final day. All they needed was a win against 17th-placed QPR, theoretically a comfortable game.

It was all going to plan as they went into half-time with a 1-0 lead thanks to Pablo Zabaleta’s first and only goal of the season.

Ever the soap opera club, everything then turned on its head. Goals from Djibril Cissé and Jamie Mackie, either side of QPR midfielder Joey Barton getting sent off for elbowing Carlos Tevez and then kneeing Aguero, put the London club 2-1 up, a lead they maintained into stoppage time.

With United winning away at Sunderland, desperation gripped the Etihad.

That despair turned to hope as Edin Dzeko equalised in the 92nd minute. With United’s game finishing with them as champions, hope then turned to sheer euphoria after 93 minutes and 20 seconds as Aguero scored that goal.

Who can forget the moment when the Manchester United fans’ and players’ learned of Aguero’s goal, their faces turning from joy to shock as they realised what was unfolding in Manchester?

Who can forget the commentary from Martin Tyler, even more iconic than that of Brian Moore’s?

Who can forget the sheer pandemonium as the fans invaded the pitch, no longer just noisy neighbours as City won their first Premier League title, only their third ever league crown and their first since 1968?

That game, and that moment, will forever be synonymous with the Premier League.

1989 deserves greater respect and recognition. It should not just be left to Arsenal fans and former players to talk about it, and it deserves to be spoken about in the same breath as 2012.

Indeed, it ranks above the 2012 finish in terms of the difficulty of the challenge. Few teams in that era beat Liverpool at Anfield, let alone by two goals.