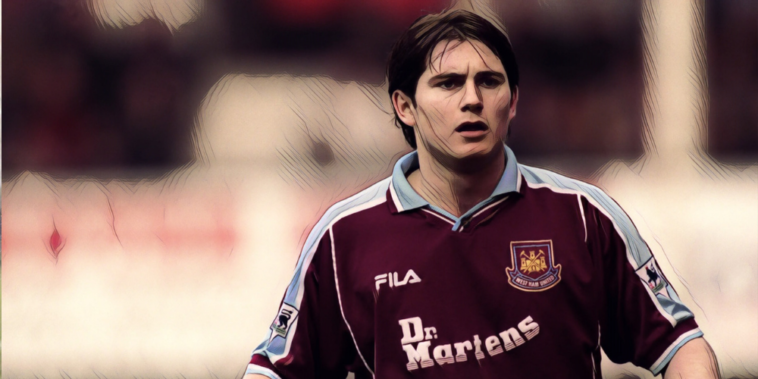 Chelsea face West Ham this weekend in a fascinating derby encounter at the London Stadium as both sides push towards European qualification.

David Moyes’ side will be hoping for a positive result against their capital rivals, with the Hammers harbouring ambitions of challenging the Premier League’s best in the coming seasons.

Despite the animosity between the two London rivals, there have been several notable names to have adorned the colours of both clubs during the Premier League era.

Ahead of this weekend’s meeting, we’ve picked out five of the best players to have played for West Ham and Chelsea in the Premier League.

Frank Lampard rose through the ranks at West Ham, with the midfielder possessing a long association with the Irons as the son of former club great Frank Lampard senior.

With his father amongst the coaching set-up at West Ham and uncle, Harry Redknapp, in charge at the Boleyn Ground, Lampard formed part of a golden collection of prospects that broke into the first-team at a similar time.

Despite his talent, the academy graduate faced criticism with some fans believing Lampard was picked on nepotism. Such criticism even led to Redknapp infamously defending a young Lampard, telling concerned fans that the midfielder would ‘go right to the very top’.

How right was Harry Redknapp when he defended a young Frank Lampard at a West Ham United Fans Forum in 1996!

🗣️“I’m telling you now, he will go right to the very top." ⭐ pic.twitter.com/hbwY4Lcxrk

Redknapp’s assessment proved correct, though not in the colours of West Ham as had been hoped. After 187 appearances and 39 goals for the Hammers, Lampard crossed the capital to sign for Chelsea in an £11m deal.

Across the next decade, Lampard established himself as one of the finest English players of his generation, scoring prolifically from midfield at Stamford Bridge.

The arrival of Roman Abramovich paved the way for a new era at Chelsea, one which Lampard remained central to as he was named FWA Footballer of the Year as the west Londoners won a maiden Premier League title in 2004/05.

He is the fifth-highest scoring player in Premier League history, an astonishing achievement for a goalscoring midfielder.

Joe Cole’s precocious talents were West Ham’s worst-kept secret in the late nineties, the street footballer amongst their ranks predicted to become one of the Premier League’s best.

Cole starred as the Hammers won the FA Youth Cup in 1999, thrashing Coventry 9-0 over two legs with the midfielder rewarded earlier in that campaign with his senior debut.

Breaking into the side as a teenager, Cole brought the fun-factor to the West Ham side with his endless tricks, flicks and willingness to try things out of the ordinary. He was named as club captain at 21 and won the club’s Hammer of the Year award in 2002/03, though was unable to prevent the club’s relegation.

Chelsea – backed by the billions of Roman Abramovich’s recent arrival – swooped in to sign the starlet, securing a £6m deal to bring Cole to Stamford Bridge.

He spent seven seasons with the west Londoners and made 280 appearances in all competitions, winning three Premier League titles and two FA Cups amongst his list of major honours.

Named as Chelsea’s Player of the Year in 2007/08, he also earned 56 caps for England and scored ten goals at international level.

The third name on this list to cross to Chelsea after emerging from the West Ham ranks, Glen Johnson joined Cole in moving to Stamford Bridge during the summer of 2003.

The teenage right-back had broken into the Hammers’ side during the 2002/03 season, making 15 league appearances in a campaign which saw the east Londoners drop into the second tier.

Chelsea secured his signing in a £6m deal as Johnson became the first transfer of the Abramovich era, featuring regularly under Claudio Ranieri during his debut season with the Blues.

The arrivals of Jose Mourinho and Paulo Ferreira lessened his role in the following seasons, though Johnson claimed Premier League and League Cup winners’ medal during the 2004/05 campaign.

He made 71 appearances in all competitions for Chelsea before moving on to Portsmouth in search of regular first-team football, breaking into the England side during his time at Fratton Park to earn an £18m move to Liverpool.

Johnson turned down a potential return to Chelsea to sign for Liverpool and enjoyed the most settled period of his career at Anfield, racking up 200 appearances for the Reds and winning a second League Cup.

Part of Chelsea’s wealth of recruitment at the start of the Roman Abramovich era, the west Londoners secured the signing of Parker from London neighbours Charlton Athletic.

Parker’s performances for the Irons saw him break into the England side, whilst he was named as West Ham’s Player of the Year in three consecutive campaigns between 2009 and 2011.

The latter of those saw Parker named as FWA Footballer of the Year despite the Hammers’ relegation, becoming one of just two players – alongside Middlesbrough’s Juninho who won the less prestigious Premier League Player of the Season accolade in 1996/97 – to have won a version of the Player of the Year in a relegated side.

Parker later had spells at Tottenham and Fulham and his all-action commitment has made the midfielder an almost universally popular figure despite changing allegiances across the capital.

West Ham gambled on the services of Demba Ba in January 2011, the forward having seen a move to Stoke collapse after problems with his knee were found in a medical.

The gamble proved a fine one for the Hammers, however, as Ba hit the ground running with a brace on his full debut against West Bromwich Albion.

Ba finished as West Ham’s leading scorer despite his mid-season arrival with seven goals from 12 league appearances, though his prolific return was not enough to keep the Hammers up as the club dropped into the Championship.

He moved on to Newcastle and scored 29 goals in 58 appearances for the Magpies, earning a £7m transfer to Chelsea in January 2013.

The Senegal international struggled to command an automatic role but proved a valuable squad member during his time at Stamford Bridge.

His memorable moments included a stunning FA Cup quarter-final winner against Manchester United, as well as that goal at Anfield after capitalising on Steven Gerrard’s now infamous slip to alter the direction of the 2013/14 title race.