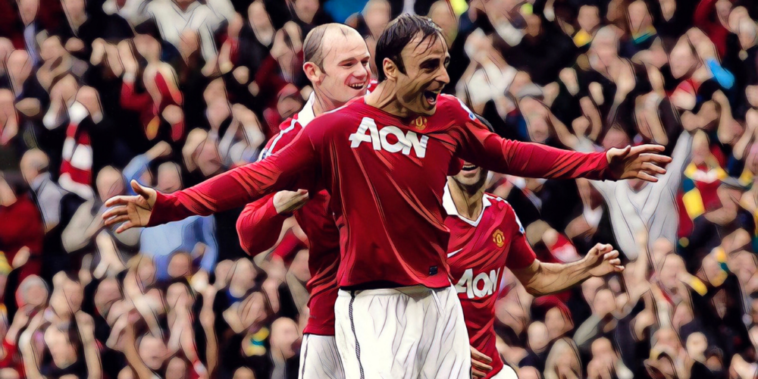 Times have changed somewhat since Sir Alex Ferguson’s withering assessment of the North London side, as Manchester United prepare to host Spurs at Old Trafford in the latest meeting between two of English football’s biggest sides.

The Manchester sides decline in recent seasons and subsequent improvement of Spurs has seen the duo perhaps closer than ever before in the Premier League era, a far cry from a time when players would freely swap between the two sides.

We’ve decided to look back at some of those stars to adorn both colours, with five of the best players to play for Manchester United and Tottenham in the Premier League era.

The most successful player to have represented both clubs, Carrick won every major club honour available during a glittering career at Manchester United, spending 12 seasons at the club and making 464 appearances.

In that time he formed part of five title-winning sides, as well as playing his part in the Red Devils’ Champions League success in 2008.

Carrick arrived at Old Trafford in an £18.6m deal from Tottenham in 2006, the elegant midfielder arriving as a replacement for Roy Keane after spending two seasons with the North London side.

A deep-lying playmaker with a fine passing range, Carrick was criminally overlooked throughout the majority of his international career.

Another player who shone at Spurs before being tempted north, Bulgarian forward Berbatov was a classy operator who enjoyed a brilliant but brief spell at White Hart Lane.

Having signed from Bayer Leverkusen, Berbatov scored 46 goals in just 102 appearances for the club, including a series of stunners and highlight-reel performances.

His displays soon attracted the attention of Sir Alex Ferguson, who parted with £30.75m to sign the forward, and he would enjoy a largely successful four-year spell at the club.

Berbatov won two Premier League titles during his spell in Manchester, including winning the division’s Golden Boot during their triumphant 2010/11 campaign.

Sheringham arrived at Spurs at the beginning of the inaugural Premier League season and ended his debut season with the Golden Boot as the division’s top scorer to start a prolific period in North London.

The fans’ favourite continued to fire and hit 75 league goals over five seasons, though the club’s inability to challenge for major honours and his advancing years saw him eventually opt to depart.

Manchester United came calling for the then 31-year-old and Sheringham was tasked with replacing departing icon Eric Cantona.

His spell in Manchester proved a huge success as Sheringham won three Premier League titles and the Champions League among his honours, coming off the bench to provide a goal and assist in the latter final win over Bayern Munich.

Sheringham’s final season with the Red Devils saw him named as the PFA Player of the Year and FWA Footballer of the Year, with the forward leaving in 2001 to return to Spurs having scored 46 goals in 153 appearances at Old Trafford.

He scored a further 26 goals across two seasons at Spurs before spells at Portsmouth and West Ham and Colchester.

The French forward featured for a host of Premier League clubs throughout his career including both Manchester United and Tottenham, though he suffered contrasting fortunes at each side.

Having burst onto the English football scene at Fulham, Saha was tempted to Old Trafford in January 2004 in a deal worth in the region of £12m.

Saha had impressed after scoring 15 goals across the first half of the season for Fulham and joined the Red Devils’ attacking options alongside Ruud van Nistelrooy and Ole Gunnar Solskjaer.

He began brilliantly by scoring seven times in his first ten starts, but injuries hampered his first full season and he struggled to establish himself as an automatic first-choice.

An improvement in form and the departure of Van Nistelrooy saw Saha feature and score more regularly, hitting 42 goals in 124 appearances for the club over four-and-a-half seasons, winning two league titles, a League Cup and the Champions League before joining Everton in 2008.

After four seasons on Merseyside he signed for Spurs on a short-term deal, scoring four times in 12 appearances before being released from his contract.

Ok, so we’re scraping the barrel with this one, but we’ve got a Five of the Best section to fill, so here goes.

Campbell emerged from Manchester United’s hallowed academy ranks, though he made just two league appearances before a lack of minutes saw him pursue opportunities elsewhere on loan.

One of those loan spells came at Tottenham, as Campbell moved to the North London side on deadline day as part of the record-breaking deal that took Dimitar Berbatov to Old Trafford.

His temporary spell at the club saw him struggle to dislodge the likes of Roman Pavlyuchenko and Darren Bent as a first-choice, though he did score three goals in all competitions including a first-ever Premier League goal against Hull City.

He returned to Manchester United at the end of the season, joining Sunderland the following summer on a permanent deal.