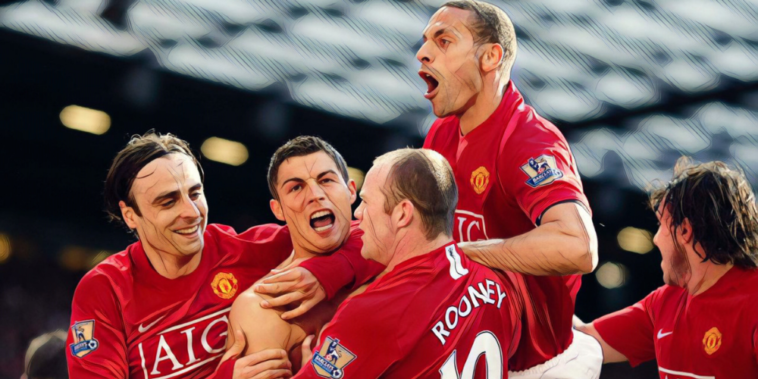 Manchester United host Tottenham in the Premier League this weekend, a huge clash between two sides looking to remain in contention for Champions League qualification.

In recent years both sides have been firmly established in the division’s ‘top six’ and throughout the Premier League era we have seen many memorable encounters between the teams.

Ahead of Saturday’s showdown at Old Trafford, we look back at some of the most memorable matches between Manchester United and Spurs in the Premier League era.

Sir Alex Ferguson’s Manchester United side were chasing history following a memorable season but headed into the final day of the campaign needing victory over Tottenham to secure the title.

On a nerve-shredding final day at Old Trafford, United fell behind to Les Ferdinand’s opener as Spurs threatened to ruin the party, before goals from David Beckham and Andy Cole turned a tight tie in the host’s favour.

👏 This iconic lob from @VanCole9 clinched us the #PL title against Spurs, #OnThisDay in 1999 📅#MUFC #GoalOfTheDay pic.twitter.com/C8OzCZDAy6

United held on to secure the title by just a single point from runners-up Arsenal, their fifth championship in seven years and their first piece of silverware as they chased an unprecedented treble.

In one of the greatest comebacks in Premier League history, United found themselves three goals down at the interval following a first-half blitz by Tottenham at White Hart Lane.

Dean Richard’s debut started brilliantly as he headed home the opener for Spurs, before goals from Les Ferdinand and Christian Ziege put the North London side in a commanding position.

Defending champions United returned after the break as a team transformed, however, Andy Cole, Laurent Blanc, Ruud van Nistelrooy, Juan Sebastian Veron and David Beckham all on the scoresheet to secure a thrilling fightback.

The game demonstrated the spirit so synonymous with Ferguson’s side during an era of Premier League dominance.

Sir Alex Ferguson once witheringly delivered the iconic assessment of his side’s chances of beating Spurs, with their meeting at Old Trafford during the title run-in in April 2009 another demonstration of United’s ability to comeback and the visitor’s ability to capitulate.

Tottenham threatened to derail United’s hopes of securing a third consecutive title by racing into a two-goal first-half lead, goals from Darren Bent and Luka Modric handing the North London club the initiative at the break.

As has so often been the case previously, however, United came back to secure victory.

⚽️⚽️⚽️⚽️⚽️@ManUtd had a big day against Spurs #OnThisDay in 2009 pic.twitter.com/PINctbq8wd

A controversial penalty decision allowed Cristiano Ronaldo to pull one back from the spot, before four goals in the space of just 12 second-half minutes secured the Red Devils’ latest fightback victory.

Ronaldo and Wayne Rooney helped themselves to a brace apiece, the victory one of eight in the club’s final nine fixtures of the season to wrap up another championship.

Needing to win to keep pace with surprise leaders Leicester in the title race, Spurs produced a blistering six-minute spell in the second half to thrash their top-four chasing visitors at White Hart Lane and secure a first home victory over Manchester United since 2001.

🔥 @ManUtd were swept aside in six second-half minutes at White Hart Lane #OnThisDay in 2016! 🔥#COYS pic.twitter.com/o70ws1huSi

Erik Lamela completed the scoring against a shell-shocked United side with a sweet strike just two minutes later, in a dominant display for Mauricio Pochettino’s team who restricted their opponents to just a single shot on target.

Arguably the beginning of the end for Jose Mourinho at Manchester United had been a 3-0 home defeat to Tottenham in August 2018, but a little more than two years later the Portuguese coach returned in charge of the North Londoners to haunt his former side.

United had taken an early lead when Bruno Fernandes opened the scoring from the penalty spot inside two minutes, but Spurs roared back to score four goals before half-time in a punishing performance.

On our last visit to Old Trafford… 🤯

Harry Kane and Son Heung-Min each scored twice as the former continued his blistering start to the new season, with further goals from Tanguy Ndombele and Serge Aurier completing a remarkable scoreline.

Mourinho equalled his biggest margin of victory away from home as a Premier League manager, picking the perfect venue to record a record-breaking triumph as he won by five goals for the first time since his Chelsea side won 5-0 at Swansea City in January 2015.