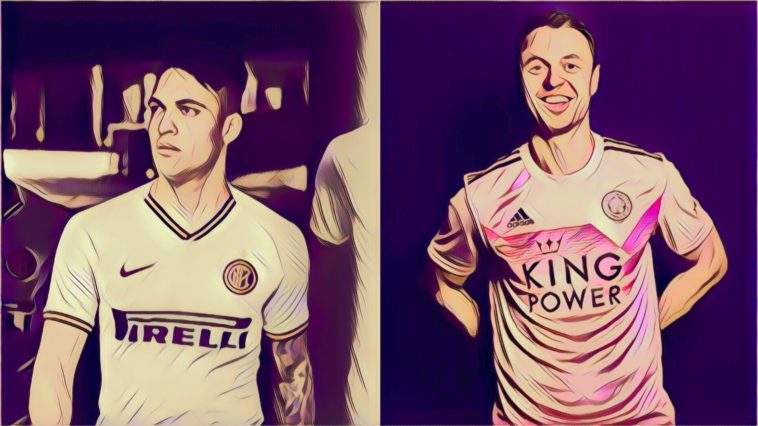 We will be blessed with some absolutely stunning new kits for the 2019/20 campaign when football returns in a couple of months.

Earlier this week we really crapped all over some truly terrible kits that we can expect to see in the forthcoming campaign of football. I’m not an apologist for such negativity, but we might as well make up for it by collating some of the finest ones for the 2019/20 season.

There are more good ones than bad ones thankfully, and although I’m unlikely to pay the over-inflated prices for any of these tops, you can be damn sure I will be gazing longingly at them for the next few months.

Here's the new @ASRomaEN 2019–20 away shirt. Inspired by Jupiter, Roman god of the sky, with a fiery thunderbolt replacing the sash. Love a bit of drama, don't they, the Romans. No word on the fella's wraparound shades yet. pic.twitter.com/zpLYusRra6

Who doesn’t love a Roma kit? The Serie A side have had some belters over the years, but this one is arguably the most eye-catching.

Introducing the 2019/20 @Coventry_City home kit! ?
After 30 years apart, hummel and Coventry City F.C. are back together. And now we are proud to present a new kit inspired by the iconic jersey of the 1988/89 season.#ShareTheGame #hummelsport #ZEROH2O #PUSB pic.twitter.com/US4jl7Oc3I

A throwback to the iconic Coventry City kit Hummel designed thirty years ago, the Sky Blues will surely be wearing the most stylish jerseys in League One this season.

The kit is also environmentally friend as the manufacturers used no water in the making of it, as part of their ZEROH2O initiative.

Fair play to Wolfsburg for marking 22-years since the forming of DX with their new jersey pic.twitter.com/gjSnDeuwzr

Nike love doing effects such as these; sometimes it works, sometimes it doesn’t. I think this one very much works.

Some of the accents threw me off on first viewing! pic.twitter.com/Il3TM9WmbD

We already talked about Arsenal’s new kits in detail when a teaser photo dropped last month, but the above promo video is brilliant. Adidas are making Gunners kits again and they’ve gone retro with their first offering, calling back to the 1989 league-winning campaign for the home version. The away one is loosely based on their famous bruised banana design from the nineties.

Read: From the Bruised Banana to the Thunderbolt – Arsenal’s greatest ever away kits

Now this I like. A throwback to the nineties, this will be one of the standout jerseys in the Championship next season. It would look better if the tiger stripes weren’t cut off by the sleeves, but Umbro have done a good job here.

Leicester City’s blue chequered home shirt is quite good, as is their sleek all black third kit, but their away jersey might be the best of them all. The large sponsor detracts from the design somewhat, but pink and black is a dynamite combination.

Eagle-eyed Twitter users did notice, however, that Adidas were selling their Campeon 19 range of tops for just over £16, meaning Leicester fans will be paying an extra £40 or so just for the crest and sponsor.

The Inter Milan away shirt for next season has been released.

Teal all over, alongside black and gold details, and the iconic Pirelli sponsor across the chest: now would be a nice time to reveal where they'll wear it first, but the Serie A fixtures haven't been released yet. pic.twitter.com/6aAEYbkVH3

Nike have done some dodgy away kits in recent years, especially for Inter and Barcelona, but this one hits the spots. Nice shade of teal with black and gold details, this one will fly off the rack.

The new @CambridgeUtdFC away kit by @hummel1923 might be an early favourite for our kit of the season. It's based on their away kit from the 1993/94 season. #CUFC pic.twitter.com/4jb1liSs0u

Anyone who knows me will know that I am a big Hummel fanboy, and it’s kits like this that are the reason why. Get yourself to a Cambridge United match next time they’re playing in a stadium near you.

Napoli would have the best jersey every season if it wasn’t for their ugly ass sponsorships ruining the aesthetics.

So, did we earn our stripes with this one Rams' fans? ?? pic.twitter.com/cJa7Jjqq0W

Derby County have had some pretty average kits over the years, but this one is a beaut. While I’m not a fan of betting companies on football shirts, it at least matches the colour combination well. Better than JustEat, that’s for sure.

Nike are out, Puma are in for a 10-year deal worth around £650m. That means we’re going to see a lot of new Manchester City kits over the next decade as the German sportswear manufacturer will try to extract as much value out of the partnership as humanly possible.

Their first home jersey looks the business, with that classic Puma feel and the purple details to freshen up the classic sky blue. Still not sure on the away kit though, maybe it will grow on me.

Very sharp effort from Hummel for Go Ahead Eagles here. Sharp colours with a tidy design will look top notch on the Dutch outfit next season.

Read: Who makes it into Football’s Ultimate Shithouse XI?

Boro’s kits have gone up a whole new level with Hummel taking over from Adidas, with a stunning new home jersey for next season. The design is based off their kits from 1987 through to 1990.

Their away kits are slick too, with red and blue details on a white shirt. They’ll be the best-dressed club in the second tier in 2019/20.

Here's something else for you, #Boro fans…

The Scottish outfit have retained the same home kit for next season, but we’re not restricting this list to just new ones so we’re adding this one. Greenock Morton’s unique take on the hoops looks great, plus they’re sponsored by Millions so it’s an instant winner.

Once again, @Atalanta_BC smashing it with this season's kits. Last year's away was a belter, but I think the slight modification for this season has made it even better. Don't even get me started on the little collar on the home shirt. #Atalanta3uropa

Fitting kits for the #UCL. pic.twitter.com/1Mtp564GKo

Atalanta will be playing Champions League football in style next season, as Joma have improved upon last year’s effort with a tidy little collar that feels like a throwback when compared to almost every modern football top.

The away shirt is a doozy, although the secondary U-Power sponsor detracts from each one.