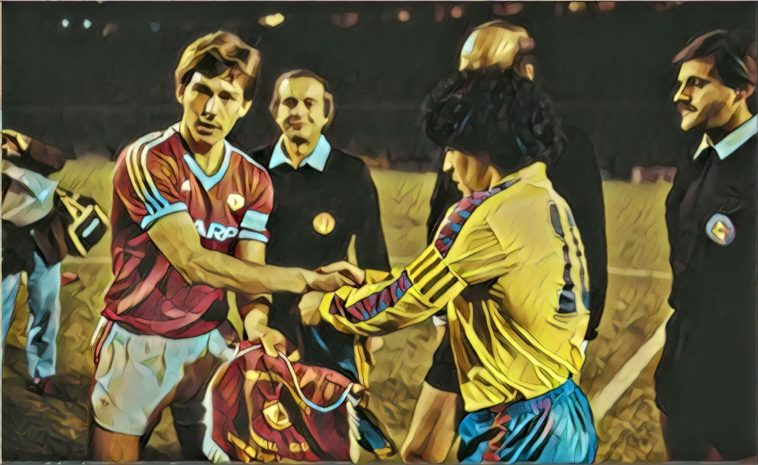 Man United and Barcelona have played out some classic encounters in Europe over the years. Can we expect another one tonight?

Last Wednesday this writer was in attendance for Manchester United’s first meeting with Barcelona in eight years, hopeful if not expectant of a potential classic between two traditional European heavyweights playing out before my eyes.

Sadly, it did not come to pass.

Although there was plenty on show to keep my interest — Lionel Messi taking on three players on his own a couple of times, Paul Pogba hitting an exquisite cross field ball, Luis Suarez being his usual shithouse self (I still would have like to have seen more of all these things over 90 minutes admittedly) — it lacked the intensity, drama and quality to be a classic Champions League knockout tie.

If Manchester United put up a fight tonight and get a goal back early on, we could be in for another one of those nights. My gut feeling tells me the Catalan outfit will snuff out any chance of a comeback with a raucous Nou Camp crowd behind them, but this season’s competition has already shown not to count your chickens before they have hatched.

There have been some incredible contests between these two sides down the years, stretching back to the eighties. The Spanish side does have the upper hand over their English counterpart however, winning five times compared to United’s three wins, with four drawn games.

Otherwise known as the day Diego Maradona came to town. If 2019’s meeting between these two sides was played on the backdrop of a relatively tame atmosphere, then their clash in 1984 arguably witnessed the loudest Old Trafford crowd ever.

Barcelona won the first leg at Camp Nou 2-0, and felt so assured of victory that they brought but a few supporters with them. That assisted in creating what former United left-back Arthur Albiston later called the most intense atmosphere he had ever experienced. “They kept up an incredible level of noise all through the game,” he recalled to the Guardian five years ago.

As well as a two-goal lead, Barça also counted two of the best footballers in the world among their ranks — Maradona and Bernd Schuster — as well as World Cup winning manager Cesar Luis Menotti patrolling the touchline. Incidentally, Marcos Alonso, father of the Chelsea full-back with the same name, featured in this fixture.

The Argentine number ten had very little effect in the game by all accounts, whereas Bryan Robson took it by the scruff of the neck by bringing the score level on aggregate with a brace. United won the encounter when Albiston himself crossed for Frank Stapleton to score their third of the night.

For United it was more than just a victory. Although they succumbed to Michel Platini’s Juventus in the last four, the quarter-final win signalled their long-awaited return to the top table of European football.

Bryan Robson has recalled this night as his best performance in a Manchester United shirt, and it’s not hard to see why. Barcelona were under the charge of Johan Cruyff, a tactical genius obsessed with his sides controlling the midfield area, but on this occasion the ex-England international dominated proceedings.

Robson hassled and harried the Catalans all night long, and set up both of Mark Hughes’ goals. The Welshman’s second is one of his most famous finishes, pushing the ball past goalkeeper Carles Busquets before scoring from a tight angle against his former team.

A Ronald Koeman free-kick/Les Seely own goal gave the Blaugrana hope of getting back into the game, but Alex Ferguson’s charges held out for the club’s first European trophy in 23 years. Cruyff’s Dream team would have their revenge though, defeating the Red Devils 4-0 in the Champions League in 1994.

I’m loathe to rely on cliché, but this game really had everything: six goals, a red card and a penalty. It foreshadowed a lot of what was to come in Manchester United’s treble-winning season, namely drama, David Beckham’s mastery from set pieces, and an affinity with the number three.

This game also has a footnote in the history of football for being Xavi Hernandez’ Champions League debut. That piece of trivia will come in handy at a table quiz, I’m sure.

Yes, Barcelona and Man United did it all again just two months later. This game is best remembered for Andrew Cole and Dwight Yorke cutting through the Barça defence like Zorro with a beautiful back-and-forth passing move, before the English striker slotted home to give the Red Devils the lead.

In the 2009 Champions League final  Man United got first-hand experience of what it was like to be utterly dominated by a Pep Guardiola team. It was his first season in charge of Barcelona and they won every trophy in sight. When they met in the final again two years later, the Catalan club secured an even more commanding victory at Wembley.

Barça opened the scoring in the 27th minute through Pedro, who somehow found himself in acres of space while every United defender was drawn towards Xavi. The pass master found the winger with an exquisite pass through several bodies.

Wayne Rooney grabbed a terrific equaliser, which has been largely consigned to the dustbin of history, before the end of the half. Despite staying in the game until the 54th minute it was a pyrrhic moment, as Barcelona’s breakthrough was only a matter of time. Lionel Messi was the man to do it, thumping the sponsorship hoardings in jubilation after his rasping drive beat Edwin van der Sar.

David Villa put the icing on the cake with a third in the 69th minute, thus confirming that Barcelona as one of the best and successful in the history of football after suffocating Alex Ferguson’s side to within an inch of their lives.

This Tuesday will be their second meeting — following last week’s encounter at Old Trafford — since that demolition job, and ten years since the final in Rome. Can Man United avenge those defeats tonight?