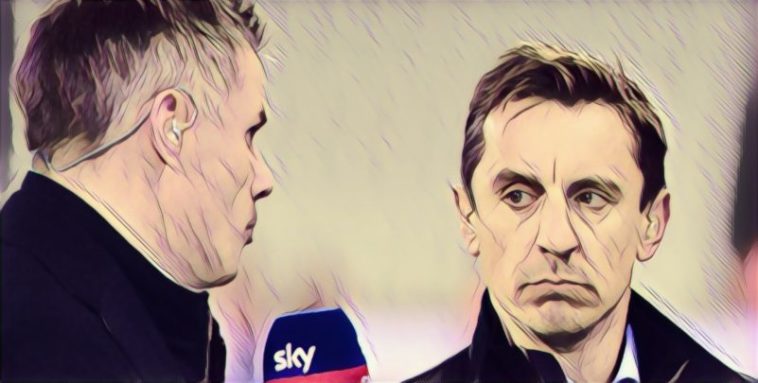 Jamie Carragher has joked Gary Neville will fly to ‘Papua New Guinea’ if Liverpool win the Premier League this weekend.

The title race will go down to the final day of the season, with Manchester City leading Liverpool by a single point with just one game remaining.

Sky Sports pundit Carragher has revealed Neville is desperate to see City clinch the title, joking that the former Manchester United defender will leave the country should Jurgen Klopp’s side be crowned champions on Sunday.

“I’m getting texts at 6:30 every morning saying, ‘Today’s the day when it’s all going to fall apart for you’. I’m getting that constantly.

“He said he’s going to book a flight, he’s already got it sorted with Emma [his wife], the flights are nearly booked for Papua New Guinea at 9pm on Sunday night.”

“He texts me 6.30am in the morning, saying today it will fall apart.”

“If Liverpool win it, he’s booked a flight to Papua New Guinea for Sunday night.”@Carra23 says Gary Neville will leave the country if #LFC win the title. ?? pic.twitter.com/jU8pIePKWD