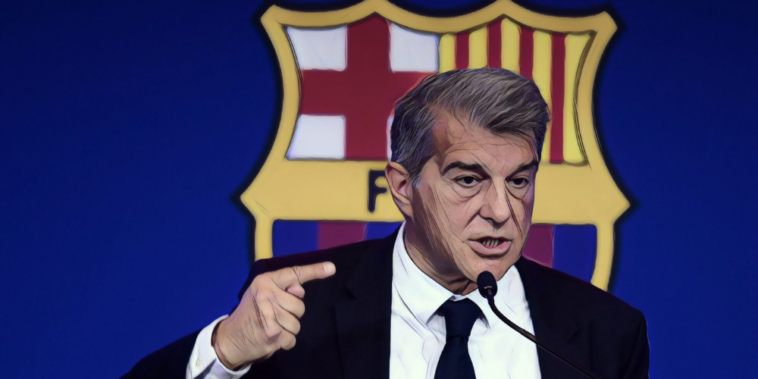 Barcelona president Joan Laporta has claimed Manchester United and Liverpool were ‘the real founders’ of the European Super League proposal and insists the ‘project is alive’.

European football was stunned by the announcement of a breakaway competition earlier this year, with the Premier League’s ‘big six’ – Manchester United, Manchester City, Liverpool, Chelsea, Arsenal and Tottenham – joining leading clubs from Spain and Italy in announcing plans for a new tournament.

The plans controversially included guaranteed annual entry to the lucrative ‘Super League’ for the founding clubs and threatened the existence of UEFA’s current European competitions, though was met by a furious backlash from supporters and leading figures within the game.

Each of the English sides subsequently withdrew their interest, though Barcelona, Real Madrid and Juventus have so far refused to distance themselves from the collapsed proposals.

However, Laporta has now claimed that it was United and Liverpool who were the ‘real founders’ of the concept and insists the project remains alive.

“Liverpool and United were the real founders of the Super League,” he told a general assembly meeting on Sunday.

“Uefa threatened and was demagogic. The clubs have still not paid the compensation for leaving.

“The Super League project is alive. It will be the most attractive competition in the world, and it will be based on meritocracy and solidarity.”

Typical Bullshit from spaniards, if it was the Americans owners am sure that the other clubs were all in agreement that Barcelona and Real Madrid should be given more than the other teams so they could keep up the pretense of being the best clubs in world football and fifa of course have done nothing against the Spanish wankers but quickly came down on premier teams