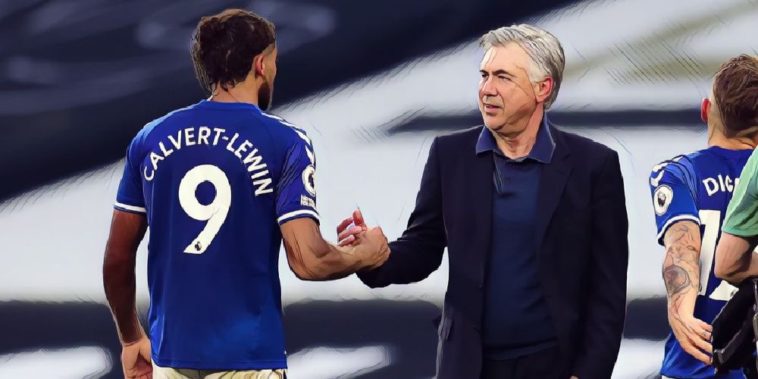 Carlo Ancelotti is reportedly interested in signing Timo Werner and Dominic Calvert-Lewin as he begins his rebuild of Real Madrid.

Ancelotti walked away from Everton earlier this month in favour of returning to former club Real Madrid, following Zinedine Zidane’s decision to resign from his position at the Spanish giants.

The Italian is now plotting his rebuild of the side following a disappointing campaign at the Bernabeu and is understood to be targeting forward additions, with Werner and Calvert-Lewin amongst his targets.

talkSPORT are reporting that Ancelotti is considering a bid of around £50m for Calvert-Lewin, with the Everton forward having flourished under the manager’s guidance during his 18-month spell on Merseyside.

The 24-year-old scored 21 goals in all competitions last season and has established himself in Gareth Southgate’s England set-up, scoring four times in 10 caps and forming part of the Three Lions’ squad for Euro 2020.

Everton are yet to appoint a new manager, though could be tempted by a big bid given the club’s huge financial losses over the past two seasons and need to comply with Financial Fair Play regulations.

Another name said to be on Ancelotti’s shortlist is Chelsea forward Werner, who endured a testing debut campaign at Stamford Bridge after signing in a £47.5m deal from RB Leipzig.

The Germany international finished as the Blues joint-leading scorer on 12 goals in all competitions, but a series of missed chances and indifferent performances saw him heavily criticised.

Werner had previously scored 95 goals in just 159 appearances across four seasons at Leipzig and Chelsea are understood to be keen to keep the 24-year-old despite reported interest from Spain.