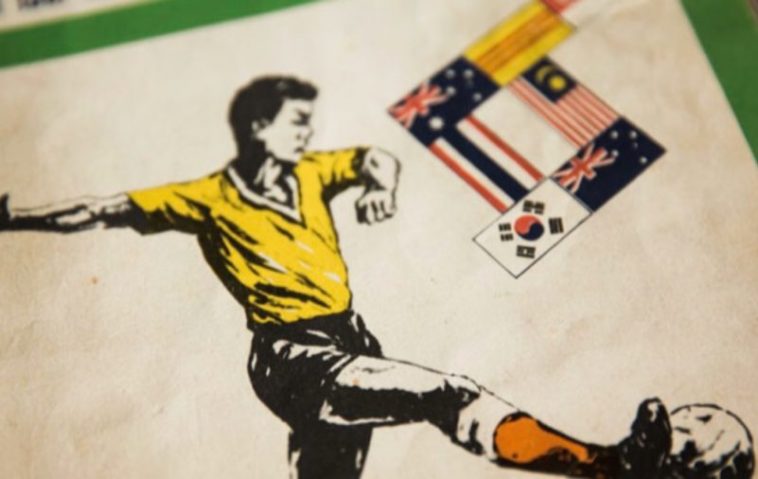 “I had prayed to God that this thing was fiction.”

– Colonel William Wilson, a combat veteran who investigated the massacre at My Lai.

Between the 4-14 November 1967, eight national football teams battled to be champions of The South Vietnam Independence Cup in war-torn Saigon. Against the backdrop of the Battle of Dak Tó, which saw 376 US troops die and 1,441 wounded, this so-called ‘Friendly Nations’ tournament kicked off.

A delusional propaganda stunt backed by the first Australian Prime Minister born in the 20th century, Harold Holt sent the Australian national team to the teargas, landmines and thick city fog of Saigon.

The birthplace of the Socceroos came about not ‘down under’ but under flare-lit skies which were full of helicopters with the Vietnam War in full flow. Players would mingle among the US soldiers for whom they had arrived to “raise spirits”. while one group went out into the jungles to put their lives on the line, the other graced the local dusty pitches with sweeping metal detectors to keep them safe.

From 1960 to 1963 the Australians had been in the international football wilderness, banned by FIFA for use of overseas players. FIFA eventually lifted the ban and the Australians faced North Korea in Cambodia in 1965 for World Cup qualification. England beckoned, but they were defeated by the North Koreans 9-2 on aggregate. The technically gifted Koreans would go on to be the darlings of the North East of England during the 1966 edition of the tournament.

On the 5 November 1967 referee Hong Duk Kong of South Korea put whistle to lips as Australia tipped off against New Zealand in front of 20,000 in the Cong Hoa Stadium. A stadium which had the smell of atrocity all around it, a number of attacks had taken place there during the conflict including on 4 October 1965 when 11 people lost their lives and 42 others were injured when explosives detonated.

The stadium would go on to be renamed the Thóng Nhát (the reunification stadium) after the war but on this day in November the Aussies would defeat their Kiwis neighbours 5-3 with tournament top scorer Attila Abonyi netting the opener for the gold shirts.

Abonyi, of Hungarian descent, would go on to be part of the first Australian side in 1974 to play in the World Cup finals in West Germany. Today Abonyi Place in Glenwood, a suburb of Sydney, is named after the man himself in recognition of his football talent.

The team stayed at the Caravelle Hotel in downtown Saigon, nicknamed the ‘Golden Building’, home to the Australian Embassy and Australian soldiers who befriended the team. Sadly the hotel as you might imagine in a war-torn city did not live up to its name – “filthy and run down” is how it was described with “rancid spam” as the main course each evening. The Aussies also faced the daily threat of being blown to “kingdom come” as the Viet Cong made daily attempts to blow up the hotel.

In the side was Stan Ackerley, a Mancunian who had emigrated to Australia in 1963 after starring for the Red Devils youth side from 1959-1961. While at Old Trafford Ackerley witnessed from the stands Munich survivor Dennis Viollet break Jack Rowley’s scoring record; Viollet netted 32 league goals in the 1959/60 season, a club record which still stands. Ackerley didn’t make the grade at United, ending up at the lower echelons of English football with Oldham, Kidderminster and Altrincham.

Whilst in the Caravelle Hotel, in a freak accident, Ackerley was flung across the floor of his room after attempting to turn on the switch of his fan and touching a live wire which led to a burn going straight through his sock. A shocked Ackerley survived to go on to play every minute of the tournament.

A training session at the local park ahead of the next tie versus South Vietnam was a scene of jumpers for goalposts for the international team. The dusty training track was surrounded by a six-foot fence, over which a number of balls had flown. As members of the team went to retrieve them they were met with chants from locals of  “don’t go, don’t go” – the field behind the fence was littered with landmines. The balls remained in no man’s land and the team moved to the roof of the Caravelle for future sessions.

The Australians, facing South Vietnam on 7 November, were visited at half-time by the South Vietnamese Vice President, who offered the players a six-month salary bonus to throw the match. Nguyen Cao Ky, who had been part of the 1967 elections dogged by vote-rigging and intimidation which saw Nguyen Ván Thiéu become President, was told in no uncertain terms “where to go”.

Leading 1-0 with a goal scored by 24-year-old captain Johnny Warren in the 35th minute, the Aussies held out in a mud filled pitch for victory over the hosts. Warren would go on to be known as Captain Socceroo for his promotion of football in his home country and today the best player in the Australian domestic league wins the Johnny Warren Medal.

After the game, the Australians were advised to remain in their dressing room for half an hour, as the beleaguered Vietnamese fuelled their anger in defeat. The trip back to the ‘Golden Building’ was less than friendly with locals hurling rocks at the team bus and people trying to break the buses windows. Local disappointment in losing a football match had turned into fervent anger with this attack on the Australians; the Vietnamese had looked for hope from the beautiful game in a desolate place.

The victorious Australians were whisked through the narrow streets of Saigon to celebrate with the Aussie soldiers who they had befriended in their barracks aptly named the ‘Canberra’, where spam was replaced with steaks and burgers, all washed down with a few beers.

In the next game, the Australians went on a goal feast destroying the Singaporean team 5-1, Abonyi bagging a hat-trick. This led to a semi-final tie against a stubborn Malaysian side who narrowly lost 1-0 with Ray Baartz netting in extra time. Baartz, hailing from New South Wales, had broken the Australian transfer record in 1966, costing Sydney Hakoah £5,600 after he had returned to Australia from Manchester United.

On the 14 November, the Australians lined out against South Korea in the final of the tournament in front of a full house of 30,000 spectators. Prior to kick off the Australian soldiers who now saw the national football team as their brothers were refused entry.

On hearing this the Australian football team remained in their dressing room refusing to leave until their fellow countrymen were permitted entry to the stadium. With the Australian Army men in the stands, the Australians went on to capture the Independence Cup with a 3-2 victory, captain Warren netting the winner.

On that November day, Warren stood on the steps of the Cong Hoa Stadium with trophy lifted aloft among ex-pats and Vietnamese locals.

Today the ‘Socceroos’ are a worldwide brand, but some say the journey began in Saigon.