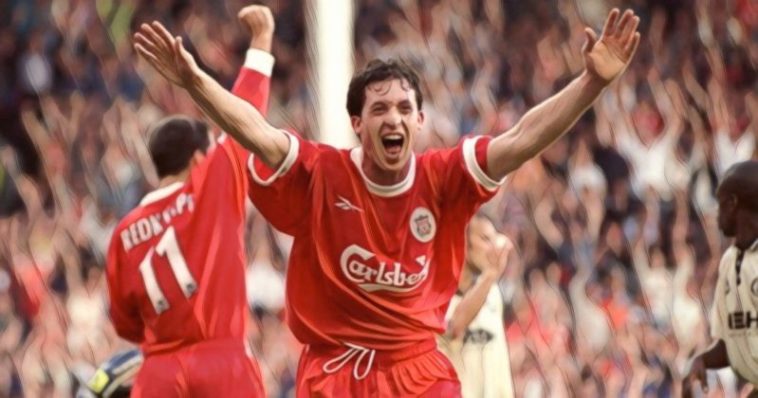 Liverpool’s failure to secure a league title during the Premier League era so far is well-documented, though the Merseyside club have still possessed some of the finest talents the division has seen since its inception in the early nineties.

The club’s current attacking triumvirate of Mohamed Salah, Sadio Mane and Roberto Firmino is amongst the most feared forward lines in world football at present, and that trio follow in the footsteps of some great goalscorers to have adorned the club’s famed all red colours.

We’ve decided to profile the ten players to have scored a half century of top-flight goals for the club, here is the rankings of every Liverpool player to score 50+ Premier League goals:

Daniel Sturridge’s recent career may have been decimated by injuries, but it is worth remembering his undoubted quality during a brief peak at full fitness in a Liverpool shirt.

Having failed to make the grade at Chelsea the forward’s signing was viewed as somewhat of a gamble by Brendan Rodgers, but the forward would repay the Northern Irishman’s faith with a prolific spell at the club.

Sturridge scored as a substitute on his Premier League debut against arch-rivals Manchester United, part of a haul of 50 goals scored in just 116 appearances over a six-and-a-half-year spell.

His finest season came during an electric campaign working in tandem alongside Luis Suarez in 2013/14, the duo finishing as the division’s two highest scorers with 52 goals between them during a season when Liverpool narrowly missed out on the title.

The Netherlands international may not have been able to transfer his prolific goalscoring record from the Eredivisie to English football, but he nonetheless became a firm fans’ favourite due to his relentless industry and reputation for delivering on the biggest of occasions.

Converted from a central role to a right-wing position by Rafael Benitez, Kuyt earned himself cult status after scoring 51 league goals over a six-year period, including becoming the first – and so far only – Liverpool player to score a hat-trick against Manchester United.

One of Liverpool’s current attacking options, Firmino reached a half century of league goals for the Reds at Burnley earlier this season, becoming the first Brazilian to reach 50 Premier League goals.

Firmino may be recognised as the club’s number nine and centre-forward, but to judge his play solely on goals would a great disservice to his role within the side.

The former Hoffenheim player is an attacking talent of unique style, mixing South American flair with a work-rate honed during four-and-a-half season stay in Germany’s Bundesliga.

Described by Jurgen Klopp as the ‘engine’ of his Champions League-winning side, Firmino has scored 56 goals in 166 league appearances for the club.

The second of Liverpool’s current forwards to make this feature, Mane has developed into one of world football’s most exciting talents since moving to Anfield from Southampton almost four years ago.

Scorer of the Premier League’s quickest ever hat-trick during his time on the South Coast, the Senegalese forward has elevated his game to new heights under Jurgen Klopp, working harmoniously alongside Firmino and Salah in a devastating frontline combination.

The unassuming 27-year-old combines electric pace with a composed finishing ability, his feints and lightening change of pace making him a nightmarish prospect for even the best defences, with many punters regularly flocking to leading betting sites like Bettingmetrics in search of his goalscoring odds – especially in big games.

Joint-winner of the Golden Boot alongside teammate Salah and Arsenal’s Pierre-Emerick Aubemayang last season, Mane has hit 59 goals in just 118 appearances for the Reds.

The Spaniard waltzed into Liverpool with the nickname El Nino from his time in his homeland, but after arriving as ‘the kid’ would emerge as arguably Europe’s finest centre-forward under Rafael Benitez.

Torres signed with a burgeoning reputation that was almost instantly justified, breaking Ruud van Nistelrooy’s record for the highest scoring season by a foreign player in their debut Premier League campaign.

Manchester United’s Nemanja Vidic – regarded by many amongst the division’s all-time great defenders – was memorably given nightmares by the forward’s electric pace and eye for goal, Torres scoring 65 league goals in just 102 appearances.

Few imports have been taken to the hearts on Merseyside quite like Torres, though the love affair ended controversially as the forward – a sulking presence for much of his final months as a Liverpool player – departed for Chelsea in a British transfer-record deal.

He would, however, never recapture the form he showed during a sensational pomp in Liverpool red, failing to rediscover his best at either Chelsea or latter spells at AC Milan, Atletico Madrid and Sagan Tosu.

Torres’ departure left a huge void to fill on deadline day of the 2011 January transfer window, but an incoming arrival from Ajax soon made Liverpool fans forget about the Spaniard’s defection.

Suarez arrived with a growing reputation following a prolific spell in the Eredivisie, and after a period of adaptation soon developed into one of the stars of the Premier League.

The Uruguayan international’s sublime talent and often ‘over-exuberant’ will-to-win made the forward one of the most complex and controversial characters the division has seen, Suarez scoring 67 league goals over a three-and-a-half-year spell and producing a breathtaking campaign during the 2013/14 season.

Suarez scored 31 goals in just 33 appearances as Liverpool narrowly missed out on the title, his performances seeing him scoop a host of individual accolades including a PFA Player’s Player and FWA Footballer of the Year double in addition to the Premier League’s Golden Boot.

Unpopular opinion: Mohamed Salah does not get the credit he deserves.

Since returning to the Premier League at Liverpool following a previous failed stint in English football at Chelsea, Salah has scored goals at a phenomenal rate to set a series of goalscoring records tumbling.

The Egyptian international’s first year on Merseyside is one of the most memorable in recent years, scoring a Premier League record 32 goals in a 38-game season and an incredible 44 in all competitions.

Winner of the Premier League’s Golden Boot in each of the past two seasons, the 27-year-old is firmly in contention to become just the third player – after Alan Shearer and Thierry Henry – to win the award in three consecutive campaigns.

Perhaps it is his occasional wastefulness, or even his tendency to have tunnel-vision around goal and ignore teammates in better positions, but Salah is not quite as revered as perhaps he ought to be.

It’s now 70 goals and counting for Liverpool’s ‘Egyptian King’ in 100 league appearances, a goal-per-game ratio superior even to the likes of Sergio Aguero and Harry Kane.

Owen’s career can sadly be placed into two chapters, the first a golden era as the boy wonder of English football and the second an injury-ravaged final few seasons struggling to recapture former glories.

It was Liverpool who saw the very best of a preciously talented young footballer, however, Owen bursting onto the scene with a debut goal as a 17-year-old before establishing himself amongst the finest finishers on the continent.

The academy graduate won back-to-back Premier League Golden Boots before his 20th birthday, before helping Gerard Houllier’s side to a treble of cup competitions in 2001 – scoring twice in the FA Cup final – to be named as the second-youngest ever winner of the Ballon d’Or.

Owen, quite simply, lived and breathed goals. Few English players – even Wayne Rooney – have caused as much excitement following their emergence as teenagers, the forward’s electric pace and nonchalant ability to beat the goalkeeper marking him out as a special talent.

The youngest ever player to reach 100 Premier League goals, Owen scored 118 for Liverpool before joining Real Madrid in 2004. The forward’s latter move to Manchester United forever soured his relationship with the Anfield crowd, though he played an influential role in some of the club’s great modern day triumphs.

Regarded by many as the greatest footballer in Liverpool’s long and illustrious history, Steven Gerrard was the local lad who lived out the dreams of many on Merseyside during a 17-year spell in the club’s first team.

The Huyton-born midfielder made his debut in 1998 and scored his first goal against Sheffield Wednesday the following year, one of 120 he scored in the Premier League – including many a thunderbastard.

Having formed part of the side which won a treble of cup competitions at the turn of the millennium, Gerrard would be named captain shortly after before memorably inspiring the side to League Cup, Champions League and FA Cup success.

Name as PFA Players’ Player and Football Writer’s Footballer of the Year during his career, his eight inclusions in the PFA Team of the Year is a divisional record.

It takes a special talent to earn the nickname ‘God’ amongst the Kop, but Fowler’s goalscoring exploits in the nineties marked him out as a Liverpool legend in the making.

Often regarded amongst the most natural finishers the Premier League has seen, Fowler seemed to possess every possible finish in his goalscoring repertoire. Handed an opportunity as a teenage talent, Fowler would soon demonstrate his immense ability, scoring five times in a League Cup semi-final against Fulham and earning regular inclusion in the club’s Premier League side.

The goals continued to flow at a rapid rate, including a four-minute hat-trick against Arsenal that stood as the Premier League’s quickest for 21 years.

Fowler scored 30+ goals in all competitions in each of his first full three seasons, twice being named as PFA Young Player of the Year and won the FA Cup, League Cup and UEFA Cup during his time at Anfield.

The forward scored a total 128 goals over two spells at the club, the most of any Liverpool player in Premier League history.