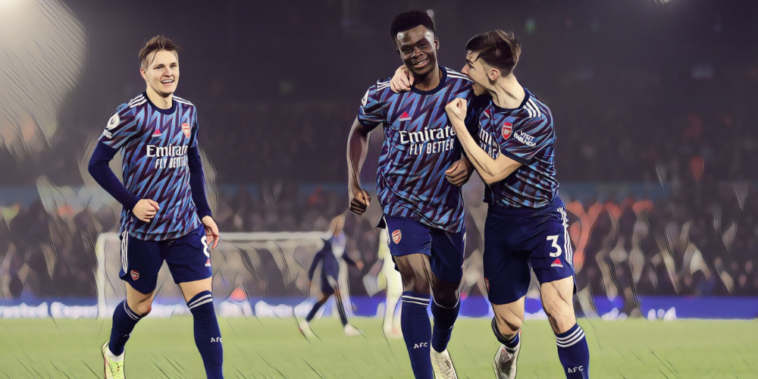 Mikel Arteta has hailed a ‘great performance’ from Arsenal after his side strengthened their grip on the Champions League places with a 4-1 win at Leeds.

Arsenal’s emerging side secured a third consecutive Premier League win with a strong showing at Elland Road, the north Londoners racing into a three-goal lead at half-time following an impressive attacking performance.

Gabriel Martinelli scored twice for the Gunners, before Bukayo Saka’s deflected effort snuck inside the near post to put the visitors in control. Emile Smith Rowe came off the bench to score a fourth, after Raphinha had pulled a goal back from the penalty spot for Leeds.

The win moves Arsenal four points clear of fifth-place West Ham in the race for Champions League football and Arteta was delighted after watching his side take maximum points from a testing week of fixtures.

“It was a great performance from the lads,” Arteta said post-match.

“They’re the ones who have to execute [the game plan] against a team who are uncomfortable to play against. We’ve had three games in a week, very physical games. I’m very pleased.

“We had some intentions. I think the players understood the game really well. We were really effective and in the first half we were really good. I think we deserved these three wins and we’re really pleased.”

Arteta was full of praise for the performance of Martinelli, who continued his impressive recent form with a well-taken brace. The 20-year-old became the youngest Arsenal player since Alex Oxlade-Chamberlain in 2014 to score a Premier League brace, and Arteta believes the forward has benefitted from his gradual reintroduction to the side after injury.

Speaking on Martinelli’s increasing influence, Arteta said: “Huge. That’s why you have to prepare a player. You can’t throw in a player when he’s not ready. He has so much still to improve. He’s very humble. His big passion in life is football.”

Arteta also commented on Pierre-Emerick Aubameyang’s continued exclusion, with the forward having not featured since being stripped of the club captaincy for a disciplinary breach.

“He wasn’t involved in today’s game. Let’s see. There’s a privacy matter at the moment that I have to respect.”