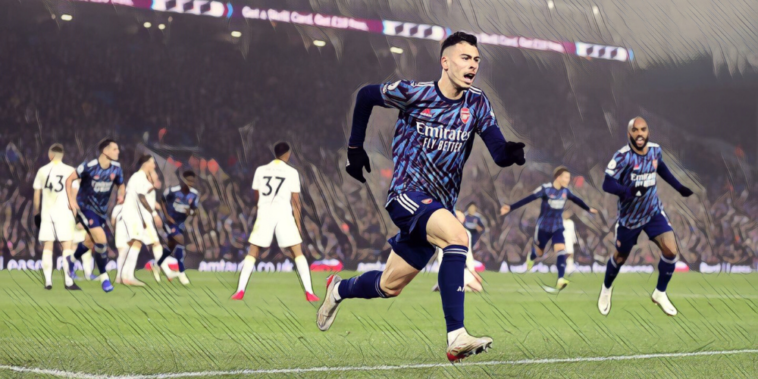 Gabriel Martinelli insists Arsenal have a ‘very strong team’ after the Gunners’ youngsters produced an impressive performance to win 4-1 at Leeds.

Martinelli continued his fine recent form after scoring twice at Elland Road, with further goals from Bukayo Saka and Emile Smith Rowe sealing an emphatic three points for Arsenal at an injury-hit Leeds.

Arsenal were dominant across the opening exchanges to register 11 shots on target in the first half alone, the most recorded by a Premier League side inside the first 45 minutes since the data was first collected in 2003/04.

Martinelli’s double and Saka’s deflected goal gave the Gunners a three-goal lead at the interval, before substitute Smith Rowe came off the bench to score for the second successive fixture.

Martinelli was delighted with his side’s performance as Arsenal moved five points clear of fifth-place West Ham in the race for Champions League qualification, hailing the strength of Mikel Arteta’s emerging side post-match.

“It was a very good result. It’s so important for the team. All the team played well and we’re so happy with the work and the result.

“That’s what Mikel [Arteta] asks from us. Every time we go into the final third we need to be dangerous.

“As I always say, we have a young team but a very strong team with good players. Emile [Smith Rowe] came from the bench and scored another goal. I’m so happy for the team.”

The Brazilian scored a superb second after racing onto Granit Xhaka’s pass to lift the ball over the goalkeeper, with the 20-year-old praising the midfielder’s assist and his flourishing partnership with fellow forward Alexandre Lacazette.

“It was a great pass from Granit [Xhaka] – thanks to him as well. Not just me, the whole team enjoyed the second goal. He [Lacazette] always attracted the centre-back and I had the chance to go in behind. We’re doing well.”