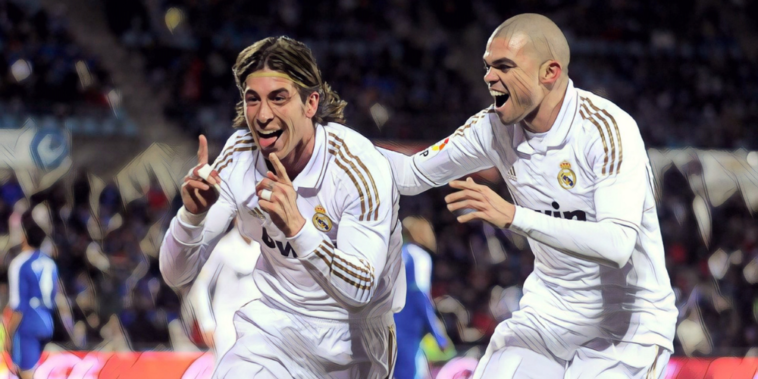 Real Madrid is often a daunting trip for opposition sides, a clash in the famed Santiago Bernabéu Stadium against a team steeped in rich history and with a record number of European trophies in their possession.

For a decade as Sergio Ramos and Pepe formed a formidable obstacle in defensive tandem, it proved an even more intimidating proposition.

The partnership of the centre-back commanders proved a cocktail of talent, tempers, skill and shithousery, each willing to more than cross the line in their pursuit of success.

The all-white colours of Real Madrid were their castle and each were prepared to engage in any necessary evil to defend their ground and ensure ambitions were met, a backbone of full-blooded commitment that formed the foundation of a glorious era in the Spanish capital.

Three league titles, two Copa del Rey winners’ medals and an unprecedented hat-trick of Champions League trophies arrived with Ramos and Pepe at the core of the side, two fine footballers and even better antagonists.

Ramos was the first to arrive as a teenager, the sole Spanish signing of Florentino Perez’s first reign as club president, having risen to prominence at divisional rivals Sevilla.

The fee was a Spanish record for a defender, but an investment that proved inspired for a side that has notoriously overindulged in expensive new additions.

Ramos began his career at right-back before reverting to a central role, where he was joined amongst Real Madrid’s centre-back ranks by Pepe in 2007.

The Brazilian-born defender had impressed at Porto, the Portuguese side who have often served a conveyor belt of South American talent to Europe’s elite clubs.

From the outset the duo’s aggressive manner of no-nonsense defending brought fine displays and moments of ill-discipline, Ramos earning three red cards before the end of November during his first season at the Bernabeu.

Pepe too walked a narrow tightrope between the sublime and shameful, including an incident against Getafe during the 2008/09 season that earned the defender a staggering 10-game ban.

The Portugal international brought down Javier Casquero inside the penalty area, before proceeding to kick and stamp on his felled opponent in almost frenzied rage. His outrageous actions prematurely curtailed his campaign as he watched the run-in from the sidelines.

The peak for Ramos and Pepe as a partnership came with the rise of Pep Guardiola and Barcelona, the emergence of the Catalans as world football’s finest side providing the defensive duo with a challenge to relish.

El Clasico ranks as the biggest fixture in club football, but even across an unforgettable history of clashes between Spanish football’s superpowers, the era of Guardiola and Mourinho, Messi and Ronaldo, and Pepe and Ramos waging war with anyone in Catalan colours remains uniquely special.

Mourinho’s arrival sparked a new era, a manager who has often sought to create an ‘us against the world’ motto inside his dressing rooms. In Ramos and Pepe, he had two trusted lieutenants willing to go to any length for three points.

It was Lionel Messi who often found himself on the receiving end of the bruising approach from Real’s centre-back pairing, from Ramos’ robust challenge to earn a red card in a 2011 meeting, to Pepe’s stamp on the Argentine in a Copa del Rey clash the following year.

Together the two helped Real Madrid challenge Barcelona’s supremacy of Spanish football, including an unforgettable 2011/12 title success as Los Blancos earned a record 100 points and scored an unprecedented 121 goals.

That campaign saw Real once again fall short in their quest to end a decade wait for the Champions League, however, with Ramos finding himself as the target for criticism after missing from the spot during a semi-final shoot-out defeat to Bayern Munich.

It proved the start of a road to redemption for Ramos, whose exploits in Europe wrote his legend in Madrid.

Carlo Ancelotti’s appointment as manager brought an end to the storied saga of Mourinho’s managerial rein at the Bernabeu and the experienced Italian brought a sense of stability to a side whose next crisis is rarely far away.

Real progressed through the 2013/14 Champions League in impressive fashion, eliminating German opposition in Schalke, Borussia Dortmund and Bayern Munich to reach an all-Madrid final in Lisbon.

Ramos had starred during the semi-final second-leg destruction of holders Bayern, scoring twice in a 4-0 win at the Allianz Arena to continue a remarkable run of goalscoring form in the build-up to the showpiece.

Never before had two sides from the same city contested European football’s biggest prize, and it looked to be Atletico Madrid heading towards trophy success as Diego Simeone’s side carried a one-goal lead into stoppage-time.

Elite footballers find a way and as Atletico celebrations edged ever closer, Ramos rose to guide home and spark pandemonium amongst the Real support behind Thibaut Courtois’ goal.

Ramos’ rescue act salvaged the final for his side and forced extra-time, rising magnificently to meet Luka Modric’s corner and equalise with just seconds remaining.

Real overran a shellshocked Atleti in the added period as La Decima was secured, ending a 12-year wait for success on the European stage with Ramos the hero of the hour.

That success paved the way for an unprecedented period of triumph in the Champions League, as Real – now under the guidance of Zinedine Zidane – later became the first team to defend the trophy after winning the competition three times in succession between 2016 and 2018.

Ramos scored again against Atletico in the first of those successes, becoming part of an exclusive group of players to have scored in multiple Champions League finals – an outstanding achievement for a central defender.

Atletico’s emergence as a force also provided the duo with another sparring partner, contests with their city rivals often heated and providing the box-office viewing of the Ramos-Pepe axis against Diego Costa.

Costa at his menacing best was something akin to a raging bull, but Ramos and Pepe often got their kicks from waving a red flag in the Spaniard’s direction.

Perhaps the sole rival to the consistency of their performances was their regular role in the referees’ notebook, collecting cards and cautions at a truly staggering rate.

Ramos holds the record for La Liga dismissals with an astonishing 20 red cards, whilst Pepe’s decade with Real Madrid saw him amass a substantial total 79 yellows and five reds.

Their decade-long union ended following Pepe’s move to Besiktas in 2017, a stalwart of the Spaniard’s success moving on in search of more regular first-team football in Turkey.

Ramos – very much ingrained in the fabric of the club – remained until 2021, departing for PSG as one of Real Madrid’s all-time greats, his 671 appearances bettered by just three players across the club’s entire history.

Football has changed, but there remains a special place for shithousery in the game and the Ramos and Pepe partnership combined genuine elite quality with a perfection of the sport’s more sinister side.

Masters of the game’s very darkest arts, from diving to deception and everything in between, the duo became Spanish football’s equivalent of the Kray Twins. Should one not leave their mark – often the thigh-high imprint of a stud – you could be almost certain that the other would.

Respected and disliked in almost equal measure, the duo were adorned by Madridistas and detested by their club’s greatest rivals. Far from a good cop, bad cop dynamic, it was very much bad cop, badder cop for Real’s raging centre-back pair.