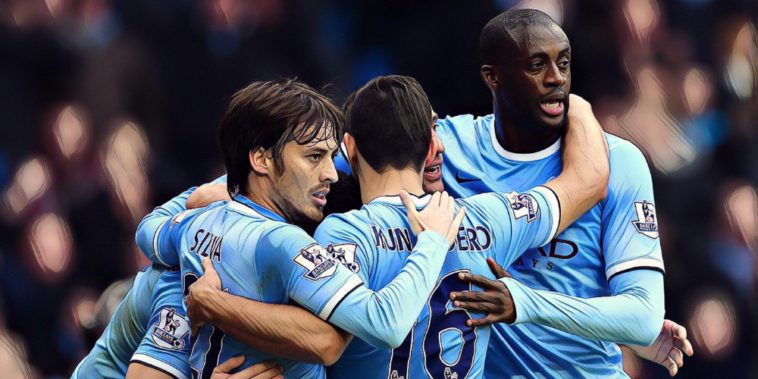 Sergio Aguero announced his retirement from football this week, the forward prematurely calling time on his career following medical advice, after suffering chest issues during Barcelona’s game with Alaves in October.

Aguero’s retirement has led to an outpour in tributes for the former Manchester City forward, who established himself as the club’s greatest goalscorer during a decade of success at the Etihad.

The Argentine was one of the first major signings of City’s billionaire-backed regime, starring during the club’s successes of the past decade and scoring the crucial stoppage-time winning goal as a first Premier League title was won on the final day in 2011/12.

Few footballers had a greater impact in City’s rise as a moder force of English football and following Aguero’s retirement we’ve decided to rank the five most important signings of the Sheik Mansour era at the Etihad.

There have been more notable signings during Manchester City’s period as one of world football’s richest clubs, but few have been more effective than the current club captain.

Fernandinho signed from Shakhtar Donetsk during the 2013 summer transfer window, having gained the attention of Premier League scouts after winning six league titles with the Ukrainian side, who have regularly unearthed and developed South American talents for Europe’s elite.

The Brazil international has been a crucial figure in the side across nine seasons, starring in an anchor role during the tenures of Manuel Pellegrini and Pep Guardiola, winning Premier League titles under the guidance of both managers.

Fernandinho formed part of the side crowned champions during his maiden campaign and has added a further three league winners’ medals, establishing himself as one of the finest defensive midfielders of his generation.

His mix of tenacity, technique and tactical intelligence have made him one of the first names on the team sheet for almost a decade at the Etihad, making 362 appearances of understated brilliance to cement his status as a modern City great.

A deal that stunned the Premier League, Manchester City completed the signing of ex-Manchester United forward Carlos Tevez to accelerate their rise as a domestic force.

Tevez had spent two seasons with the Red Devils and starred during their successes under Sir Alex Ferguson, winning back-to-back Premier League titles and the Champions League as part of a formidable forward line containing Cristiano Ronaldo and Wayne Rooney.

City secured his signing after Tevez failed to agree a permanent extension to his loan at Old Trafford, revelling in the acquisition of one of the Premier League’s finest footballers with the now infamous ‘Welcome to Manchester’ billboard depicting Tevez in City colours.

Tevez’s time with the club proved turbulent but his arrival was trailblazing and arguably the first instance of a household name turning down one of Europe’s biggest clubs to move to the Etihad.

He enjoyed the best goalscoring form of his career across his first two seasons with City, becoming the second-fastest player in the club’s history (73 games) to reach 50 goals in all competitions, behind Derek Kevan.

After his notorious exile from the side after a fall-out with Roberto Mancini the following season, he returned to the side to play his part in their 2011/12 title success, before joining Juventus in 2013.

For many there has never been a better player in Manchester City colours, with David Silva enjoying the best years of his career at the Etihad.

Silva arrived as a highly-coveted talent from Valencia in 2010, having formed part of the Spain side that claimed World Cup success in South Africa that summer.

Silva admitted that his career with the club exceeded even his wildest expectations when signing up to City’s ambitious project, winning 11 trophies – including four Premier League titles – across a decade in English football.

The Spaniard’s performances saw him emphatically question pre-conceptions regarding foreign imports in the Premier League, his immaculate close control and bravery in possession seeing the diminutive playmaker dominate opposition midfields.

Willing to receive the ball in compact areas on the half-turn, he was a star name in a City side that played some of the finest football the Premier League has witnessed and was an irreplaceable figure under three different title-winning managers.

Silva may possess a stronger claim as Manchester City’s best ever footballer, but it is difficult to overlook the contributions of Yaya Toure in establishing the side as a major footballing force.

Toure arrived into the Premier League as a marquee name having formed part of Pep Guardiola’s talented Barcelona side, winning a historic treble with the Catalan club during the 2008/09 campaign.

His immediate was impact during a memorable debut season in Manchester, with Toure’s FA Cup semi-final winner against Manchester United often cited as the defining moment in the shifting of momentum between the two city rivals.

The midfielder then scored the winner as Stoke were beaten in the FA Cup final, ending City’s 35-year wait for major silverware.

Toure was an instrumental figure as the Premier League title was won the following season, before producing one of the division’s greatest individual seasons as a second league winners’ medal was secured in 2013/14.

He was the driving force of Manuel Pellegrini’s side with 20 goals and nine assists from midfield, and despite squabbles between his agent and City’s leading figures denting his reputation somewhat, there are few who played a bigger role in City’s rise to the elite.

Sergio Aguero ranks as our most influential footballer of Manchester City’s modern era, the club’s greatest ever goalscorer and a forward who so often delivered when it mattered most.

From his first minutes in City colours the club knew they were onto something special, the Argentine coming off the bench to score one and create another in a 4-0 thrashing of Swansea at the Etihad.

Aguero’s first campaign ended with 23 goals and that moment, his moment, on the final day of the season, scoring the Premier League’s most iconic goal with a stoppage-time winner to snatch the title from arch-rivals Manchester United.

Had the events been scripted – with City trailing at home to relegation-threatened Queens Park Rangers with seconds remaining – it would have been deemed unfeasible and Aguero’s goal was one of the division’s greatest moments.

Aguero scored 260 goals for the club in 390 appearances for City to become their record scorer, winning five Premier League titles, six League Cup trophies and the FA Cup among his honours.

His 184 goals in the Premier League is a record for an overseas player, whilst no footballer in the division’s history can better his astonishing average of a goal every 108 minutes. Undisputedly one of the greats of the Premier League and a Manchester City icon.