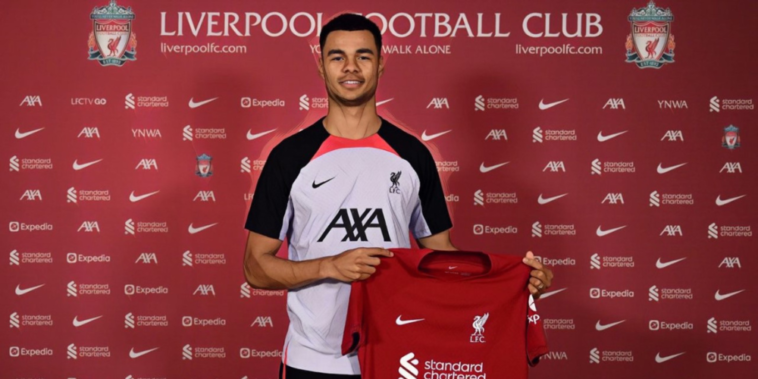 Liverpool have reached an agreement with PSV Eindhoven over the signing of Cody Gakpo, with the in-demand forward having signed a six-year deal at Anfield.

The move will become official once the January transfer window opens next week with Jurgen Klopp having struck a deal to sign the Netherlands international.

Gakpo arrives with a growing reputation after an impressive period at PSV and becomes one of Dutch football’s most expensive exports.

Here are the five most expensive Eredivisie to Premier League transfers in history.

Donny van de Beek’s performances for an exciting Ajax side saw top clubs across Europe take note, with Manchester United agreeing a deal to sign the midfielder worth £35m.

Van de Beek has shone during Ajax’s run to the Champions League semi-finals in 2018/19, where his marauding runs into goalscoring positions were a feature of Erik ten Hag’s side. He scored 41 goals in 175 appearances after coming through Ajax’s academy ranks, before departing the Dutch side for the Premier League.

Feels good to be back and to play in front of the Stretford End again ♥️💪🏼 pic.twitter.com/KYugF8nruj

It’s been a miserable time since for Van de Beek however, who has failed to make an impact in England. He was afforded just four league starts across his first 18 months at Old Trafford and a loan move to Everton last season failed to revive his fortunes.

The arrival of former Ajax manager Ten Hag at the Red Devils last summer offered hope, but Van de Beek has remained a peripheral figure and missed out on a place in the Netherlands’ World Cup squad as a result.

He has started just one game – a 3-1 defeat at Aston Villa – and totalled just 110 minutes in the Premier League this season. It would come as no surprise to see the club cut their losses on Van de Beek in the upcoming transfer window.

Cody Gakpo’s move to Liverpool has made the forward the fourth-most expensive Eredivisie to Premier League transfer.

Liverpool have agreed a deal worth an initial £37m for Gakpo, though the fee could reach around £45m with performance-related add-ons. Gakpo’s exciting emergence at PSV turned the heads of Europe’s elite clubs, with the 23-year-old named as Dutch Footballer of the Year after scoring 21 goals in all competitions last season.

This season Gakpo has elevated his game once again, leading the Eredivisie for both goals and assists having recorded 21 goal contributions in just 14 league appearances. An impressive World Cup campaign – in which he scored three goals for the Netherlands in Qatar – has convinced Liverpool that he is ready for the next step and the Reds have swooped in to add the Dutchman to their attacking options.

Gakpo’s arrival comes with Luis Diaz and Diogo Jota sidelined and his ability to operate in multiple positions across the front-line will add variety in the final third.

Davinson Sanchez’s rapid rise saw the defender go from exciting prospect to Tottenham’s club-record signing, via the Eredivisie, in a little more than 12 months.

The Colombian centre-back formed part of the Atlético Nacional side which won the Copa Libertadores in 2016, where his performances attracted interest from Ajax. He joined the Dutch side for a fee of just €5m, before departing the following summer for a huge profit.

His sole season at Ajax saw Sanchez make an impressive adaptation to European football, as he scored six goals in 44 appearances to win Ajax’s Player of the Year award, as the club reached the Europa League final.

Spurs agreed a £42m fee for the defender, a club record at that time, but he has struggled for consistency across five-and-a-half seasons in north London. The 26-year-old has not started more than 17 league fixtures in either of the past two Premier League campaigns.

Erik ten Hag raided his former side after leaving Ajax for Manchester United last summer, with Lisandro Martinez at the top of his wish-list.

Martinez won the Ajax Player of the Year award during the 2021/22 season after helping the Dutch side to the Eredivisie title. He made 120 appearances for the club across three seasons before following Ten Hag to Old Trafford in a £57m deal.

The Argentina international faced initial criticism following a difficult start to his career in England, as several sceptics questioned whether he had the physical frame to deal with the rigours of the Premier League.

Martinez has answered his critics with an impressive start to his career with the club, becoming a firm fans’ favourite for his committed approach and quality in possession at centre-back. He returns to the Red Devils this winter as a World Cup winner, having played his part in Argentina’s success in Qatar.

Manchester United made another big-money signing from Ajax later in the window, agreeing an £86m deal to sign Antony from the Dutch champions.

The Brazil international had established himself as one of the Eredivisie’s most exciting talents, having been involved in 46 goals in just 84 appearances for Ajax.

His sale set a new record for the Eredivisie, eclipsing the £68m fee that took Matthijs de Ligt from Ajax to Juventus in 2019. He also became the third-most expensive Brazilian footballer of all time, behind Neymar (£198m) and Philippe Coutinho (£105m).

The winger has been eased into action since his summer arrival, but has shown flashes of the talent that made him so sought-after. He has three goals in seven Premier League appearances so far this season.