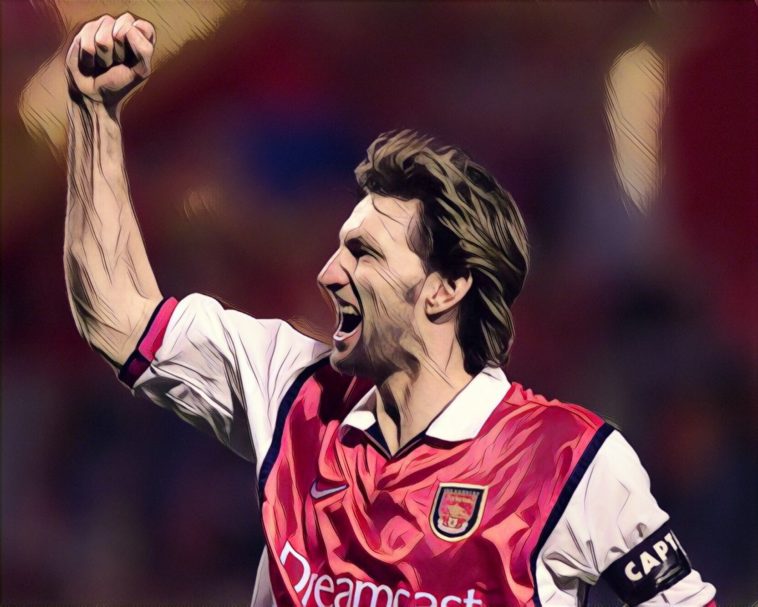 The latest inductee into the 90’s Football Hall of Fame is Arsenal and England legend Tony Adams.

Dubbed Mr. Arsenal for his undying loyalty to and figurehead status at the club, the centre-back enjoyed a glittering 19-year career in which he made 672 appearances for the North London outfit, winning four league titles, three FA Cups, two League Cups and the European Cup Winners’ Cup. He is also the only player to win the English top division in three different decades.

Away from the pitch Adams battled with personal demons, however, as alcoholism consumed his life. He was sentenced to four months in jail, of which he served half, in 1991 for drink driving. He didn’t kick the addiction until 1996, at which point Arsene Wenger came to Arsenal and had a revolutionary effect on the club’s culture. The focus turned to attractive football and healthy living, extending the careers of the likes of Adams for many years.

The Romford native was considered a proper old-fashioned centre-back in the first two-thirds of his career, but under the tutelage of Wenger he was able to show that he did indeed have a lot of ball-playing ability. His ultimate redemption came in the form of a stupendous Premier League title-clinching goal against Everton in 1998, one of the most iconic of the genre. He stuck around to play a small role in the Gunners’ double triumph in 2002, ending his career on a high.

On the latest episode of the 90’s Football Hall of Fame podcast, we are joined by Colm Boohig of Off The Ball to discuss what made Tony Adams such a natural leader, some of his most famous goals, his infamous trip to Singapore after crashing his car, and the times he played while drunk.