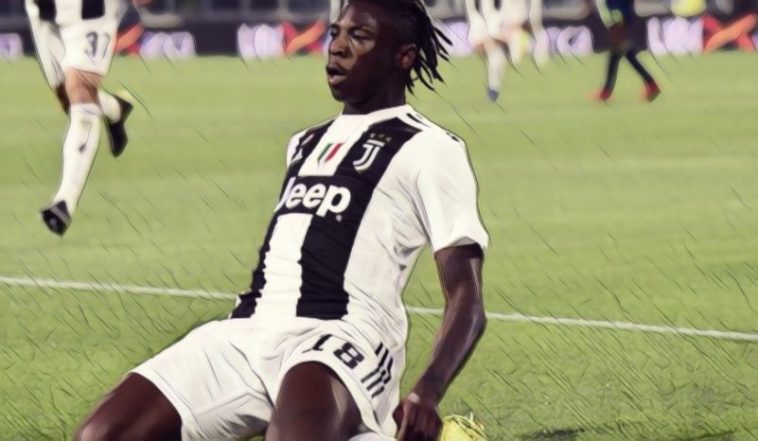 Everton have made one of the most widely discussed transfers in the Premier League this summer by signing Moise Kean from Juventus.

The Italian youngster has had no shortage of attention over the past year, from sensational performances in Serie A to defiant and admirable stands against racism in football. Yet while a move to Merseyside has lifted expectations for Everton next season, it’s worth asking whether Moise Kean is the right striker for the Toffees to sign?

Marco Silva improved Everton’s attacking output last season, as he slowly but surely transitioned the side from the prosaic football of Sam Allardyce to a more attacking style of play in a 4-2-3-1 formation.

He demands that his attacking players work tirelessly off the ball, shifting across to mark passing lanes and intensifying the press when the opposition move the ball out wide. The aim of the press is to win possession closer to the final third and to create shooting opportunities with as little build-up as possible.

Dominic Calvert-Lewin, the man who was favored upfront towards the end of the season, was excellent at leading Everton’s press from the front.

Once in possession, Silva encourages his fullbacks to push up, allowing Richarlison and Bernard to operate as inside forwards. From here, the attackers engage in quick passing interchanges which normally result in either direct shooting opportunities or crossing opportunities, where looping balls from deep are attacked by Calvert-Lewin or Sigurdsson as a late-arriving threat.

This emphasis on crossing is shown by the fact that Everton had the most crosses of any team in the Premier League last season and scored the joint-third most headed goals. As such, if Everton look to purchase a new line leader, their number nine must be a player who can be a goal scorer, an aerial threat, and capable of facilitating play between a fluid attacking line. Does Moise Kean fulfill these needs?

Kean shone for Juventus last season, especially from March onward as the club needed to balance European and domestic football. He made 5 starts and 8 substitute appearances in Serie A, scoring 6 goals in 536 minutes at an incredible rate of 1.01 goals per 90 minutes.

He takes a high volume of shots with 3.10 per 90 and is able to shoot from good areas. He can finish with both feet, and is excellent at running in between defenders and beyond the opposition line. With the 1.39 dribbles per 90, Kean is also capable of creating chances for himself.

He is adept at finding space through astute movement, an encouraging sign for a player so young. An explosive presence, Kean was a joy to watch at Juventus as he benefited from the sensational creators around him and finished chances with poise and efficiency.

However, the rest of his game is less developed. He is not a threat in the air, not good at creating for others, and is not an active presser off the ball. Given that his career has just begun, there’s not too much game time to assess him from. But, from limited minutes, we can see that Kean is quite skilled as a goal scorer and dribbler but not as an all-round forward.

This could be a problem for Everton. His inability to score headers, link attacks, and press could make settling within Silva’s setup difficult. Moreover, Kean is widely regarded as a significantly better finisher than any current Everton attacker.

However, this is somewhat misleading because it does not take into account the quality of chances Kean is scoring relative to other Everton players. Statsbomb models for xg (expected goals) illustrate the likelihood of a goal based on the quality of a chance, and rank Kean’s ability to finish chances on a similar level to Calvert-Lewin.

While Kean has scored more goals in fewer minutes, he has been surrounded by much better players and therefore gets a higher quality of chance. Kean can still be regarded as the better goal scorer because he can create chances for himself and find space to score more effectively than Calvert-Lewin, but the statistics show that the gap between them in terms of finishing may not be so vast. Given that Calvert-Lewin is a willing presser and greater aerial threat, he could be a better solution should he get more game time.

However, there are undeniable positives to Kean’s signature as well. He is only 19, meaning he has ample time to develop other aspects of his game. His physical and technical development is far from over, meaning he could be treated as more of a long-term project than a short term solution. He has tremendous potential, and has the raw attributes to genuinely become a top-class striker should he be developed properly.

He could also help Everton become more effective on the counter, with his pace through the middle adding to the threat of Richarlison and Bernard out wide. Given that Silva has made a name for himself as a counter-attacking coach, he could be looking to use Kean as a way to transition the team into that style next season.

Moreover, Kean’s innate ability to find space in the box could translate to Everton scoring more goals next season. There’s also the fact that with Calvert-Lewin and Richarlison, he could be part of a young, dynamic attacking line that could become the cornerstones of Everton’s team for years to come.

Ultimately, this is a strange transfer. Kean is undoubtedly one of the best players in his age group, and has distinctive qualities that suggest he could become a star of the future. However, he has limitations that will be exposed in Everton’s current tactical setup. His signing could indicate a change in style that is less predicated on crossing, but this is yet to be supported by other transfers.

Everton director of football Marcel Brands is widely respected, and that respect is merited. Yet the selling of Ademola Lookman and Nikola Vlasic, the loss of Idrissa Gueye, and a lack of significant improvement from last season are worrying. Brands could be plotting other transfers in the future to build towards a team that could play a different way and to a different caliber, and Kean could be a key element to that.

But that’s an unknown, and at present, Kean may not be the goal machine Everton fans are looking for. His signature will attract significant attention, as any up and coming prospect of his talent would, but whether Everton can make full use of that talent next year is an unknown.

Read: The 10 best Ajax products to play in the Premier League