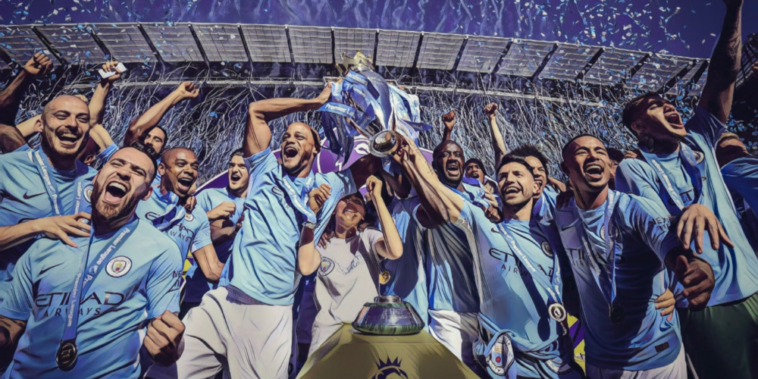 Manchester City are Premier League champions once again, with Pep Guardiola’s side securing a fourth title in five seasons on a thrilling final day of action.

The Premier League has witnessed some truly fine footballing sides throughout its existence and the modern Manchester City are among the best, but arguments persist over the division’s greatest ever team.

Some use retaining titles as the yardstick, whilst others prefer win records and points totals. Whilst some say that a record points total suggests an uncompetitive league, others will argue that it is the sign a truly great team.

Here are the seven teams with the highest points totals in Premier League history.

The newly-crowned champions needed 93 points to retain their Premier League crown this season, edging out Liverpool by just a single point in the title race.

Pep Guardiola’s team lost three games all season in another fine campaign for City, whose sustained success is building a case for being declared the Premier League’s greatest team.

City led the league for goals scored with 99 and boasted the division’s joint-best defence alongside Liverpool, a combination that ensured the Premier League title remains at the Etihad for another season at least.

Their title win was sealed in thrilling fashion, as City – two goals down against Aston Villa with just 14 minutes remaining – turned the game around to win in a stunning climax at the Etihad.

With Erling Haaland set to arrive this summer, we could be set for more domestic dominance in the blue half of Manchester.

Chelsea appointed Antonio Conte as manager in the summer of 2016, after the club had just finished the previous season 10th (10th!?) in the Premier League.

Few expected the Blues to challenge, but the Italian’s tactics galvanised the squad as they romped to the Premier League title.

A 3-0 thrashing at Arsenal saw the former Juventus manager famously switch to a back three, and the tweak brought stunning success with a 13-match winning run.

Conte’s debut season saw Chelsea clinch their 5th Premier League title and included breaking records for the fewest draws in a season (3), consecutive wins (13) and most wins in a season (30).

If you announce yourself as ‘The Special One’ in your introduction to English football, you better have some substance to back your claim.

Thankfully, for Jose Mourinho and Chelsea, the Portuguese manager had just that.

Super Frank at the double! 🔵 🏆

Along the way the club broke a whole host of records, losing just once and conceding a Premier League record low of just 15 goals.

Incredibly the only side to feature on this list and not win the title, Liverpool missed out on the Premier League by just a single point during the 2018/19 season, despite boasting a points tally that would have crowned the Reds champions in all but one of the division’s previous campaigns.

Jurgen Klopp’s side became the first team in history to win as many as 30 games in a league season and not secure the title, whilst no side had previously lost just one game in a top flight season and not been crowned champions.

That sole defeat came via the finest of margins away at Manchester City, the side who pipped them to the Premier League crown.

That aforementioned Manchester City side sit third in the rankings of the highest ever Premier League points totals, after another superb season saw Pep Guardiola’s side secure back-to-back league titles.

City registered a joint record of 32 league wins throughout the campaign, including finishing the season with a phenomenal run of 14 consecutive victories to overhaul Liverpool and be crowned champions by just a single point.

An unforgettable season at the Etihad continued as the club secured the first domestic treble in the history of English football, as Guardiola continued to set new standards since his arrival in the Premier League.

After finishing as runners-up by the narrowest of margins despite a club-record points tally the previous season, Liverpool bounced back to finally end their wait for a Premier League title in some style.

Jurgen Klopp’s side enjoyed the best start to a season in the history of Europe’s top five leagues to take an unassailable lead at the top of the division, winning 26 and drawing one of their opening 27 fixtures of the campaign, including equalling a Premier League record of 18 consecutive wins.

Any excuse to revisit it ❤️ pic.twitter.com/zE5rmM9Nsq

The club’s charge towards a first title in three decades was briefly halted by a 3-0 defeat to Watford in late February, before a global pandemic brought a three month hiatus to the campaign and threatened to curtail their record-breaking season.

Premier League football returned in June, however, and saw the Reds wrap up the title with a record seven games to spar. Defeats to Manchester City and Arsenal came after the championship was secured in a season that saw the champions finish on 99 points.

The benchmark for every Premier League side, Pep Guardiola’s all-conquering Manchester City side broke record upon record during a sensational 2017/18 season.

The most dominant league campaign in Premier League history, City’s ‘centurions’ became the first side ever to reach 100 points as the club left all in their wake, finishing a huge 19 points clear of nearest challengers Manchester United.

It was a sensational season from a side many consider to have played the best football the division has witnessed, their play spellbinding at times as they swept all before them to win the first league title of Guardiola’s reign.

[…] the division looking a lot tighter this term, it seems the points tally required to win the league will be significantly lower than in recent […]