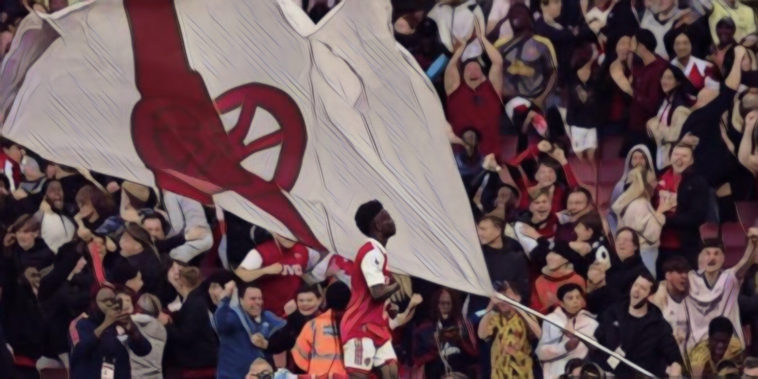 Arsenal moved back to the top of the Premier League table after they secured an excellent 3-2 home win over Liverpool today.

The atmosphere around the Emirates was electric at kick-off and the Gunners faithful went into raptures when their side took the lead after just 58 seconds. A flowing team move ended with a perfectly weighted slide rule pass from Martin Odeegard rolling into the path of Gabriel Martinelli, with the young Brazilian expertly guiding a low finish past Alisson and into the bottom corner.

Liverpool looked shellshocked after Arsenal’s rapid start, but they eventually began to work their way back into the game and just after the half-hour mark Jurgen Kopp’s side deservedly drew level. Arsenal defender Gabriel misjudged a long ball forward which allowed Luis Dias to get in behind and square a ball across goal to summer signing Darwin Nunez, who duly fired home with a sliding finish.

With both sides committed to pressing high and attacking with numbers it made for a hugely entertaining game, and in the fifth minute of injury time, a counter attack from Arsenal ended with Mikel Arteta’s side scoring their second. Gabriel Martinelli this time turned provider, squaring for England international Bukayo Saka to stretch and poke home at the back post.

1+1 – Gabriel Martinelli is the youngest Arsenal player to score and assist against Liverpool in the Premier League (21 years 113 days). The Brazilian has been directly involved in 10 goals in his last 14 appearances in the competition (5 goals, 5 assists). Admired. pic.twitter.com/43hUIPNgFS

Much as in the opening period Arsenal started the second half in a dominant mood and looked primed to extend their lead further. However, against the run of play, Liverpool drew level, substitute Roberto Firmino latching onto a Diogo Jota through ball and finishing coolly with an inch-perfect left-footed strike into the bottom corner.

Despite Liverpool hitting an equaliser Arsenal would continue to look the better side and it was no surprise when the Gunners retook the lead on 75 minutes. The lively Gabriel Jesus was fouled in the area by Thiago and Saka stepped forward to fire a confident penalty past Alisson.

Liverpool pushed on looking for an equaliser, but Arsenal held on for what, after an impressive second half display was a deserved victory.

“There were a lot of moments and the threat they have they can open you up, but we showed a lot of composure and character,” Arteta told Sky Sports.

“It was the best way to start because of the belief it generates in the stadium, so we’re really happy.

“We could not get out [before half-time] because we were not good in our build-up and to play the ball inside is very difficult. We started to lose some duels and we needed to hang in there to get to half time.”

Arteta then went on to say how pleased his was with the ‘maturity and composure’ his side showed after he talked to them at half-time.

“It was lively but we wanted to give confidence and tell them the game was there for the taking. [In the second-half] the organisation was better, the timing of the press, we won every second ball.

“I was really happy. You are always in doubt with the changes and how many players they were putting on, but the players dealt with it with a lot of maturity and composure.”