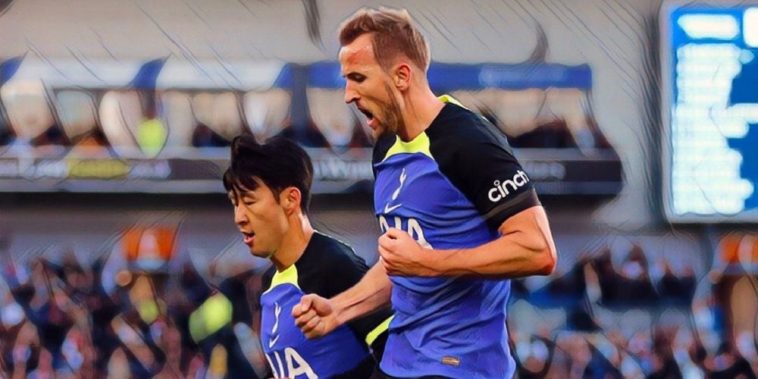 Tottenham Hotspur got back to winning ways to maintain their place in the top four with a hard-fought 1-0 win over Brighton on the South Coast.

It was the fifth meeting between Antonio Conte and Roberto de Zerbi, and hopes were high of a high-scoring affair, with the previous four encounters (between Inter Milan and Sassuolo) bringing 19 goals.

While De Zerbi’s first game in charge in English football saw his side play out an entertaining 3-3 draw with Liverpool last weekend, Spurs boss Conte has seen his side win just one of their six away games this season and has demanded they are ‘more clinical’ in front of goal.

If you are looking for anyone to be clinical in front of goal, then Harry Kane would likely be the man for the job, and the Spurs striker gave his side the lead with a predatory finish. Brighton only half-cleared a Spurs corner that allowed Pierre-Emile Hojbjerg to recycle the ball to Heung-Min Son. The South Korean took a shot with his left boot, only for Kane to steer Son’s effort beyond Robert Sanchez with an instinctive flicked header.

After falling behind, Brighton were far the more progressive of the two sides, and created a number of presentable chances, though the home crowd grew increasingly frustrated as the final ball was often left lacking.

Spurs did have chances of their own to extend their lead, Kane surprisingly dragging a shot wide, while a tidy curling strike by Son was ruled out for offside.

The result gets Spurs back to winning ways after losing the North London derby last weekend and playing out a disappointing goalless draw against Eintracht Frankfurt in midweek, and speaking afterwards, Antonio Conte felt his side put in a good performance.

Harry Kane in the Premier League:

“We tried to play with intensity and I think the victory and the win is deserved. A great compliment to Brighton because they are a really good team.”

The Italian deployed a midfield three of Rodrigo Bentancur, Pierre-Emile Hojbjerg and former Brighton man, Yves Bissouma, and Conte said his change of shape was due to injuries and the need to give others rest amid a busy schedule.

“We wanted to play with one more midfielder because usually we play with two strikers but right now we have Dejan Kulusevski and Lucas Moura injured. When you have to play every three days, you need to give players some rest.

“Richarlison needed some rest, it is a different intensity to Everton so that is why he was on the bench.

“I’m happy that Oliver Skipp came back with us and I’m happy for Matt Doherty to come back after a long injury.

“There was a lot of positive things and we go away from here with a lot of confidence. We know we have an important game at home on Wednesday and I would like to invite our fans to make a good atmosphere in our stadium for that match.

“When the results are good for our players, I am the first person to be happy. We need to create a unity in the team and every player needs to know that they can play. In my opinion, there is room for every player in my squad.”