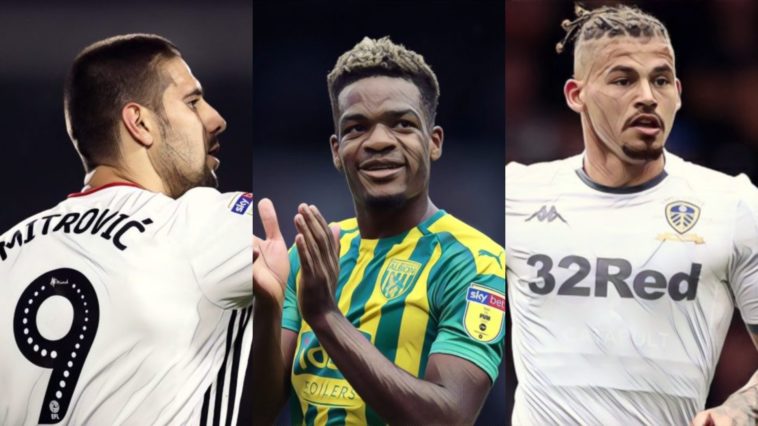 A new season brings with it three new teams in the Premier League, each of whom scrapped and scraped their way out of the Championship.

The transition from the second tier to the top flight is never a simple one and can be arduous, if not downright atrocious (just ask Norwich City). But there is always the chance they will defy the odds, finish well clear of the dropzone and impress everyone with their play along the way (hello, Sheffield United).

Each of one of this year’s promoted sides – Fulham, Leeds United and West Bromwich Albion – went up with a positive, attractive style of play. Whether or not it translates at the top level still has to be determined, but they will no doubt be calling on their very best players to help them do so.

Not everyone is ready for that big step up, but we’ve picked out two players from each team who we are really looking forward to seeing.

Another one of Bielsa’s disciples, Kalvin Phillips has been immense for Leeds these past two seasons. He’s not just been the best midfielder in the league over that time, but arguably deserved an England call-up for his performances.

Phillips has been, in many ways, the heartbeat of the best team in the division for two consecutive campaigns. He also contributed two goals and two assists in 37 appearances, and finally got that long-awaited England call-up this month.

It says a lot about his ability and potential that the ‘Yorkshire Pirlo’ could earn an international cap without kicking a ball in the Premier League.

There were some dismissive groans when West Brom got promoted ahead of Championship darlings Brentford, who played some of the most scintillating football in the country last season, but frankly complaints of seeing ‘boring old Albion’ back in the top flight are wide of the mark.

Under experienced manager Slaven Bilic they are a far cry from the drudgery of the Tony Pulis era, scoring 77 goals – the second-most in the division behind the Bees – on their way to a second-placed finish. They also possess two of the most exciting attackers from the 2019/20 campaign, one of whom is the soon to be permanently signed Grady Diangana.

The Congolese midfielder plays with a nonchalant flair that will get you out of your seat and make a fool of many a seasoned defender. His highlight reels are ridiculous, so it’s unsurprising that he cites Ronaldinho as one of his inspirations.

On the verge of signing for £18 million after spending last season on loan from West Ham United, Diangana is ready to burst into life in the Premier League.

The Fantasy Faithful podcast: How to build your FPL squad

The full-back caught the eye with his ingenious free kick in the play-off final at Wembley last month, but Joe Bryan has been a consistent performer in the attacking phase since joining Fulham two years ago.

The Englishman provided three goals and seven assists during the Cottager’s promotion run last season, while he also created 45 chances. That was the joint second-most in the Championship alongside the highly-rated Matty Cash, who just joined Aston Villa from Nottingham Forest for £14 million.

Although Bryan has been criticised in the past for the defensive side of his game, he is one of Fulham’s most important creative outlets. Expect to see him whipping in crosses with his wondrous left foot straight onto the head of a certain Serbian striker on the regular this coming campaign.

When Fulham did the impossible: Ten years on from that Juventus comeback

The only footballer on this list who hasn’t actually played for his club yet, Rodrigo is nonetheless one of the most intriguing and exciting signings of the summer transfer window.

Leeds broke their transfer record to sign him from Valencia, where he scored 38 goals over six seasons. The Spanish international only found the net four times in La Liga last season, but he was playing for a pretty mediocre team who were not that prolific overall and he only made 23 starts.

🎯 @England know all about Rodrigo pic.twitter.com/cmX8rcdlnu

But what the Yorkshire outfit are getting is a seasoned international from a top five league in Europe with Champions League experience. If Marcelo Bielsa is able to rekindle the kind of form the forward showed in 2017/18, when he scored 16 league goals, then he’s got a real gem on his hands.

After arriving on loan from Sporting CP in 2019, Matheus Pereira was one of the most exciting players in the Championship last season. The Brazilian contributed a ridiculous eight goals and 17 assists to the West Brom cause, delivering a cutting edge to their brilliant attack.

Pereira will be vital to Albion’s hopes of survival next year after they paid the buyout clause agreed between the two clubs, making him an absolute bargain of a buy at £9m. He loves having a crack from distance, but he’s also capable of perfectly timed runs into the box for goalscoring opportunities.

An exceptional campaign ✨@MatheusPereira is the @IdealBoilers Supporters' Player of the Season. A worthy winner. pic.twitter.com/nqHEx06AnK

The Championship’s Golden Boot winner in 2019/20, Aleksandar Mitrovic is about to embark on his fourth campaign in the Premier League. The striker found the net 11 times the last time he was here, but couldn’t stop Fulham from sinking back down at the first time asking.

A classic number nine in a world where that type of player has become far less frequent, Mitro will be hoping to kick on and finally lay down a marker for himself as one of the top flight’s most fearsome forwards.

Seeing as we've had to throw today's content plan out the window, here's all 2⃣3⃣ of Aleksandar Mitrović's @SkyBetChamp goals he's bagged so far this season 🔥#FFC pic.twitter.com/hOuc6xs6L2

The Serb’s 26 goals accounted for 39% of Fulham’s total goals in their promotion campaign, the largest proportion of any team in the league. Only Raheem Sterling, Pierre-Emerick Aubameyang and Raul Jiménez have scored more for an English club since the start of season, not bad company to keep.

Without him, the SW6 outfit might very well be languishing in the desolate purgatory of the second tier’s mid-table.

Read: Drama, heartache and loadsamoney – why the EFL Playoffs are the best thing in football