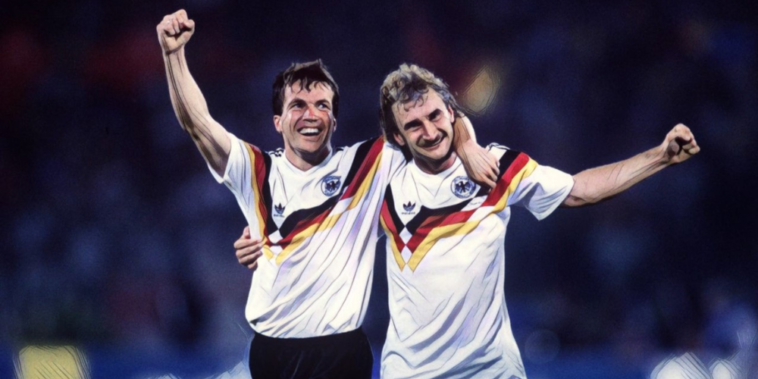 World Cup history is littered with magical moments, glorious goals and iconic colours, with the tournament having been stage to some of the best kits in memory.

Selecting the best is a contentious topic, but as Qatar fast approaches we’ve decided to look back at some of our favourites from past tournaments.

Here are 10 of the greatest kits in World Cup history.

There’s little more iconic than the famous yellow colours of Brazil, a nation steeped in rich footballing tradition with the South Americans crowned world champions on a record five occasions.

Among the very finest versions of Brazil came in 1970, as a team containing the likes of Pele, Jairzinho and Carlos Alberto were crowned World Cup winners in Mexico, producing a masterclass to thrash Italy 4-1 in the final.

It was a third World Cup win in four tournaments for Brazil, with their legendary side adorning this clean classic of bold yellow shirts with green detailing around the neck and sleeves.

The brand best known for denim jeans once tried their hand at sporting shirts, creating Mexico’s kit for the 1978 World Cup.

It was more than a decent effort, though the Mexicans disappointed to crash out of the competition without a single point.

Did you know Mexico's shirts in the 1978 World Cup were produced by Levis?

The Netherlands Euro ’88 kits is perhaps the defining jersey among a long collection of outstanding Oranje shirts, one which became the imagery of Dutch football’s greatest triumph and that Marco van Basten goal.

The Dutch have never won a World Cup, though Johan Cruyff and company came awfully close after successive final appearances in the 1970s. The second of those came in Argentina in 1978, a tournament which saw the Netherlands adorn this Adidas effort.

The bold orange, black detailing and iconic three-stripe sleeves make this a masterpiece.

Argentina triumphed on home soil in 1978, defeating the aforementioned Netherlands side after an extra-time victory in Buenos Aires.

The champion’s kit was a clean-looking number from Adidas, one which included the original trefoil logo and the South American’s traditional blue and white stripes.

Italy hosted the first tournament of the nineties and the host nation were expectant as a team containing the likes of Roberto Baggio and Franco Baresi competed to be crowned champions.

It was a surprise star who shone however, as Salvatore ‘Toto’ Schillaci – capped just once before the tournament – emerged as the surprise package of the finals. The forward scored six goals to help Italy to a third-place finish, claiming both the Golden Boot and Golden Ball awards.

Schillachi’s stunning campaign came in one of the great Azzurri kits, a bold blue in a shinier fabric than past editions and a new round logo containing three stars to represent Italy’s past World Cup triumphs.

West Germany’s effort from Italia ’90 is perhaps the nation’s best remembered kit, one which is regularly circulated among classic kit collectors.

The traditional white shirt is decorated with the black, red and gold colours of the German flag, producing a pleasing aesthetic. That the Germans went on to be crowned world champions in 1990 has only enhanced its legacy.

A great kit worn by a great player in a truly great side.

France were crowned world champions for the first time on home soil in 1998, as Zinedine Zidane scored twice to down Brazil in the final at the Stade de France.

Brazil’s best shirts are often associated with their World Cup-winning teams, but there’s a special place in our affections for the Selecao’s strip from France ’98.

It was a tournament that saw Ronaldo – pre-final and convulsive fit – reemphasise his status as the world’s finest footballer, as O Fenômeno led the South Americans to the final with a string of superb performances.

The double offering from Nike of a stylish Selecao shirt with the game-changing blue, yellow and silver ’98 Mercurial’s – all adorned by the greatest number nine in the game – remains etched into World Cup folklore.

France ’98 was a great tournament for kits.

The World Cup was introduced to Croatian checkerboards at the finals, as Croatia competed as an independent nation for the first time.

Their exciting team finished third after a thrilling run through the tournament, with the goals of Golden Boot winner Davor Suker propelling the Croats into the latter stages. It’s difficult to go wrong with the Croatian colours, but this was a classic version of an international favourite.

Nigeria have churned out some classic kits in recent years, including this edition released ahead of the 2018 World Cup.

It’s popularity was such that it sold out within days of being released and was hailed as an instant icon among the World Cup’s greatest kits.

The vibrancy and pattern gave the Super Eagles a unique look, with classic kit collectors disappointed that there will be no World Cup special from the Nigerians this time around. An away goals defeat to Ghana – whose 2022 kit is one to forget – denied Nigeria a place at the finals.