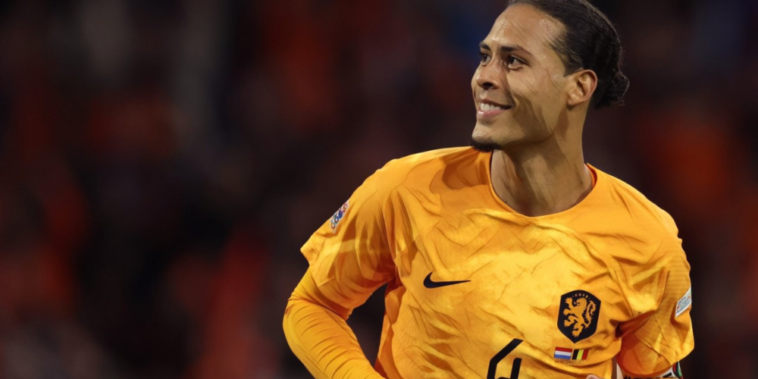 There’s nothing quite like the World Cup. Even given the unusual timing and spectacle of a winter tournament, excitement is beginning to build for world football’s biggest event.

Fans from across the planet will be glued to their screens for a four week festival of football, as the game’s biggest names unite and compete to be crowned world champions.

For some, it will be a first taste of international football’s biggest stage and we’ve picked out six stars who are set to make their World Cup bow in Qatar.

The Netherlands are back at the World Cup for the first time in eight years, after the Oranje failed to secure their place in Russia in 2018.

Louis van Gaal will lead a squad without the star power of past editions, but one capable of making an impression in the Middle East. Virgil van Dijk will captain the side in what will be the defender’s first major tournament appearance.

Virgil van Dijk is attending his FIRST World Cup for the Netherlands 👏 pic.twitter.com/hSoNV7MSC2

The 31-year-old missed the Netherlands’ Euro 2020 campaign as he recovered from an ACL injury, while the Dutch also missed out on a place at Euro 2016. Van Dijk has earned 47 caps for the national side, but will make his first tournament appearance against Senegal on November 21.

A favourable group draw can provide a platform for progress, as the Dutch take on Qatar and Ecuador in addition to the African champions.

Aymeric Laporte is set to feature in his first World Cup this winter, following the defender’s decision to pledge his international allegiance to Spain.

Laporte represented France – the nation of his birth – at youth level, but was continually overlooked for the senior side before swapping to Spain. The centre-back made his debut for La Roja in 2021, before forming part of the side that reached the semi-final of the delayed Euro 2020 that summer.

Laporte has been named in Spain’s final 26-man squad despite being substituted during Manchester City’s 2-0 win over Chelsea in midweek and is expected to start at the heart of the defence for Luis Enrique’s side.

Spain have disappointed at the past two tournaments, bowing out in the group stage (2014) and last-16 (2018) after becoming world champions for the first time in 2010. While not among the fancied favourites, the Spanish have enough talent to reach the latter stages.

Wales secured qualification to Qatar with a playoff victory over Ukraine in June, securing a place at the World Cup for the first time since the 1958 tournament.

Rob Page’s side will take on the United States, Iran and England at the finals, in what could represent Gareth Bale’s swansong at international level.

Bale is Wales’ all-time record goalscorer and has been the driving force behind the nation’s modern success, having led The Dragons to the last four of Euro 2016 – their first major tournament appearance in 58 years. A second successive European Championship appearance followed at Euro 2020, before Wales secured their passage to the World Cup.

Gareth Bale will lead Wales out for their first World Cup in 64 years 🏴󠁧󠁢󠁷󠁬󠁳󠁿 pic.twitter.com/6cne5m1EKa

The 33-year-old will again be tasked with finding inspiration for the Welsh, having taken his club football to Los Angeles in a move to designed he was at full fitness for Qatar. Wales’ squad is short of top-level talent, but in Bale the side boast a talent still capable of match-winning moments even as his career approaches its end.

Jude Bellingham is part of an emerging group of English talent with the midfielder’s rapid rise set to land him a prominent place in Gareth Southgate’s plans this winter.

Bellingham was outstanding during England’s fixtures in September and appears ready for the demands of a major tournament. He became, aged 17 years and 349 days, the youngest Englishman to play at any major tournament after a substitute appearance against Croatia at Euro 2020 and has proven himself as a talent comfortable on the biggest stage.

One of my biggest dreams growing up was to play at a world cup, I’m so grateful to have been given the chance to do so. Will give everything to try and make it a tournament that the country can be proud of. Let’s go.🏴󠁧󠁢󠁥󠁮󠁧󠁿❤️ pic.twitter.com/fMtNRSnvMx

This season he has captained Borussia Dortmund on occasion and the 19-year-old became just the third teenager – after Kylian Mbappe and Erling Haaland – to score in four consecutive Champions League games earlier this season.

Bellingham boasts a maturity far beyond what is expected of a teenager and could form a midfield axis with Declan Rice that is the foundation of England’s challenge. Less than half of the England squad were in Russia four years ago, with Bellingham the lead of a new generation that features the likes of Phil Foden and Bukayo Saka.

Joao Cancelo is arguably the most influential full-back in world football, but was cruelly cut from Portugal’s plans for the World Cup in 2018.

Having been named in the provisional squad, he missed out on the final selection. Four years on and Cancelo is an irreplaceable figure for club and country, a defender who has redefined the role in recent seasons.

🤤 Joao Cancelo has more successful dribbles per game (1.9) than any of his Manchester City teammates in the Premier League this season pic.twitter.com/3OB9GfJrF7

A full-back only in name, his influence is often exerted in advanced areas with Pep Guardiola valuing his multi-faceted talents. Portugal required a playoff to reach Qatar, but have a team stacked with talent. The Manchester City trio of Cancelo, Bernardo Silva and Ruben Dias will be central to their hopes of a successful tournament.

Brazil will start the tournament as favourites as the record five-time winners look for a first World Cup crown since 2002.

Neymar is the central figure in Tite’s side, but the Paris Saint-Germain superstar has formidable support in the form of Vinicius Junior. The 22-year-old began to fulfil his vast potential during a brilliant 2021/22 campaign, in which he scored 22 goals and provided 20 assists as Real Madrid won a La Liga and Champions League double.

Brazil's attack is STACKED for the World Cup 😱🔥 pic.twitter.com/7N91DwcE7p

He has began the new season in similar form with 15 goal involvements in 21 appearances and will form part of a Brazilian forward line that has the talent to terrorise defences in Qatar.

Vinicus has failed to fire in the famous yellow shirt of the national side to date, but there are few better platforms than the World Cup to make his mark. To Brazil, it means more than most.