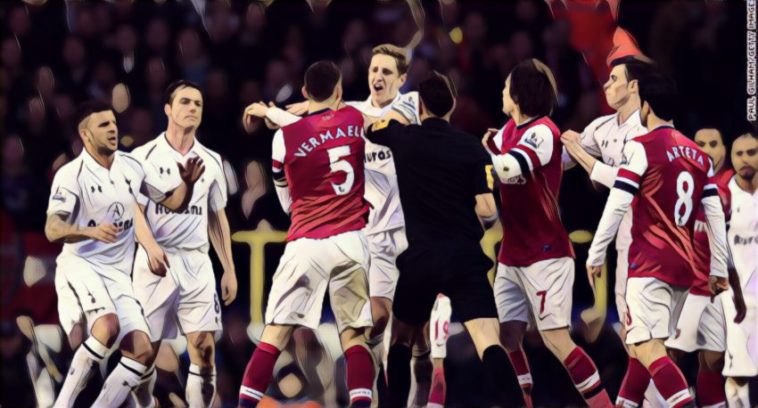 There’s something about the North London Derby. Obviously Arsenal and Spurs straight up just don’t like each other, and of course, this weekend’s game could have a big impact on each sides hopes of European qualification, but beyond that, this fixture has a tendency to throw up some humdingers of matches and some unbelievable score-lines.

So as we get ourselves ready for one of football’s most entertaining games, let’s look back on some of the games that have made this fixture so special over the years.

Going into the business end of the season Arsenal arrived at White Hart Lane knowing that a win over their bitter rivals would also put them back in contention for the Premier League title.

Theo Walcott put the Gunners in front and even though Rafael van der Vaart equalised, two more Arsenal goals from Samir Nasri and Robin Van Persie seemed to have given Arsene Wenger’s side all three points. Nope.

Is the current Spurs side better than this 2008 version? Probably. But chances are that Spurs fans will get a little teary-eyed when thinking about this one. It had everything, a goal from club hero Robbie Keane, Berbatov pulling the strings, even the thought of Aaron Lennon scampering past players to score will bring a little chuckle.

But the real belly laughs will come when they think of Bendtner scoring an o.g. to help them absolutely stuff their bitter rivals in this League Cup semi-final.

The Arsenal players started to turn on each other too which is always funny and then Spurs went on to win the competition. Arsenal fans, if it makes you feel any better, they’ve not won anything else since.

Not one for the purists this but definitely one for anyone who likes a bit of craic. This was more like a game of foosball than a top-class Premier League tie but regardless of the shocking defending on display from both sides, it was certainly a North London Derby to remember.

Another derby, another bat-sh*t crazy game. David Bentley, (remember him?), opened the scoring with a long-range beauty before the Gunners eased their way into a 4-2 lead.

It looked as though that might be it but then Arsenal arsenaled it and ‘Arry Redknapp’s side somehow managed to take a point home with them.

Sorry Spurs fans but this is one of those games that’s still sung about in the stands.

Read Also: Six players who smashed it in the Premier League after promotion from the Championship