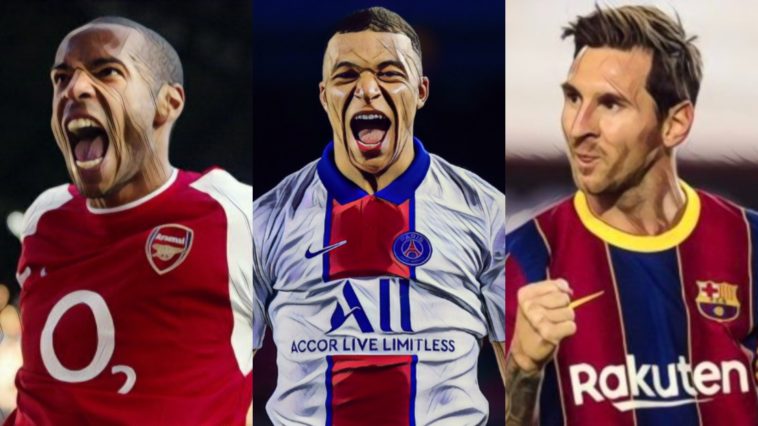 Kylian Mbappé smashed a Champions League this past week when he scored his 25th in the competition to become the youngest player to reach the milestone.

It’s a phenomenal achievement for the young forward, who joins some of Europe’s greatest ever strikers in the top five of this list.

Bursting onto the scene as an exciting young winger at Monaco, Thierry Henry scored seven goals in his inaugural Champions League campaign as the French side advanced all the way to the semi-finals in 1998.

The Parisian moved to Arsenal via Juventus in 1999, for whom he scored 35 goals in the competition. His conversion into a striker proved a masterstroke by Arsene Wenger, although the Gunners never managed to win the Champions League. The closest they came was in 2005/06 when the North London outfit lost to FC Barcelona in the final.

Henry eventually moved to their victors, where he scored eight goals for the Blaugrana and won the coveted trophy in 2006.

A four-time winner of the Champions League with Real Madrid, Karim Benzema scored his first 12 goals in the competition for his hometown club, Lyon.

The French striker’s outstanding form for the Ligue 1 side earned him a move to the Bernabeu in 2009. Despite playing in a “nine-and-a-half” role to accommodate Cristiano Ronaldo for much of his time there, he has scored 267 career goals at the Spanish club.

Benzema has been an incredibly consistent performer for Los Blancos, setting a record this season for scoring in 16 consecutive Champions League campaigns, which he shares with Lionel Messi. He has 69 total goals in the competition.

A Real Madrid legend who won three Champions League trophies, Raúl González Blanco’s career could have been so different. The centre-forward was signed by Atlético Madrid, but let go when the club’s academy was closed down in 1992.

The Spaniard joined their city rivals and went on to score 323 goals for Los Blancos. By the age of 21 he was a European champion, although he only scored twice on the way to glory. In 2000 he was a key cog in the winning machine, scoring 10 goals in 15 appearances for their second triumph in three years.

Raúl claimed another winner’s medal in 2002 and scored 66 Champions League goals for Real before joining Schalke in 2010. He scored another nine goals for the German outfit across two seasons, reaching the semi-finals in 2011.

If there was ever going to be one player at the top of this list, it would have to be the GOAT. Lionel Messi has scored an insane 120 goals in the Champions League over the course of his career, the second most in the competition’s history.

Before the Argentine had even found the net for the 25th time in Europe, he had won two Champions Leagues. He now has four winners medals at the age of 33 and is still banging in the goals, scoring five in six matches this season.

Wow, what a hit from Lionel Messi! 🚀

He smashes an absolute missile into the back of the net from 25 yards out!

Top corner, no messing about 👏 pic.twitter.com/eJXAtShGjr

It was always going to take some effort to overtake Messi, but Kylian Mbappé did it in some style. His four goals over two legs against Messi’s own team saw the electric striker break the record this month, a metaphorical passing of the torch if there ever was one.

The Frenchman exploded in his first Champions League campaign, scoring six goals as Monaco reached the semi-finals in 2017. That convinced PSG to part with €200 million (£174m) to sign him, for whom he has provided 19 goals and 16 assists in the competition.

Mbappé has already won the World Cup, four Ligue 1 titles, and played in a Champions League final. Who knows how much more he can achieve in his already incredible career.

It took 11 years for this record to be broken, but it could be overtaken in the same season. That is, if Erling Haaland manages to score five more between now and the end of the campaign. At 20-years-old, he’s going to get around to it sooner or later either way.