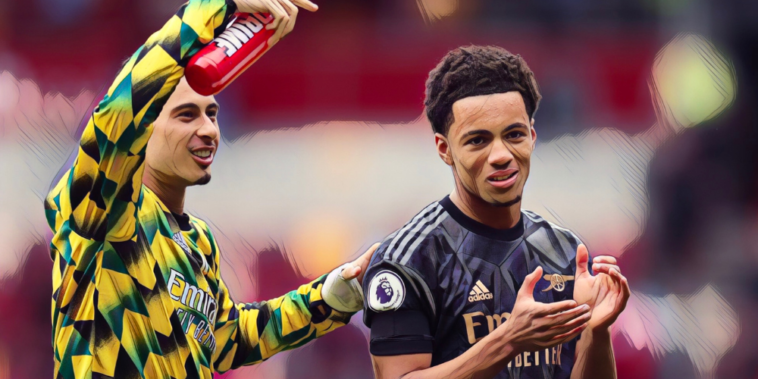 Premier League history was made this weekend when Arsenal’s Ethan Nwaneri became the youngest ever player to grace the top flight.

Nwaneri was introduced in the closing stages of Arsenal’s 3-0 win at Brentford and in the process became the youngest ever player to make a Premier League appearance.

Nwaneri, at 15 years and 181 days old, became the first under 16 to feature in the Premier League with Mikel Arteta admitting he was keen to reward one of the Gunners’ brightest prospects with a taste of senior football.

Following his record-breaking moment, we’ve looked back at the five youngest players to feature in the Premier League and it’s a list of names who have certainly had a mixed time since their precocious breakthroughs.

The Premier League’s youngest ever debutants:

The one true success story on this list, Aaron Lennon made his debut as a teenager when he was subbed on for Mark Viduka during Leeds United’s 2-1 loss against Spurs in 2003. Peter Reid must have had plenty of belief in the winger to bring him on in place of a known goalscorer when chasing a lead and his faith was proved correct. It wouldn’t do the manager much good though, as he was sacked in November of that season and the club were relegated by the end of the campaign.

Lennon left for Spurs for just £1m in 2005, where he would play for 10 years before moving to Everton. He won 21 England caps and is currently without a club after leaving Burnley during the summer.

Marked out as an exceptional prospect when he made his debut for West Brom during a 3-2 defeat to Wigan Athletic in 2013, Chelsea quickly went about snapping him up and he signed a deal with the Blues that summer.

Brown’s career failed to take off as hoped, embarking on seven different loan spells during his time with Chelsea. He never made another league appearance for the west Londoners following his debut and joined Preston North End on a permanent deal, but saw a ruptured Achilles prematurely end his time with the club.

At 25, he is currently without a club as he looks to rebuild his career.

Briggs got his chance in the Fulham first team as a 16 year old, but his is another career which didn’t pan out as expected. The left-back made his debut in a 3-1 defeat to Middlesbrough at the Riverside in 2007, but would only make 30 senior appearances over the next seven years.

Briggs was sent out on loan four times, to Leyton Orient, Bristol City, Peterborough and Watford, before leaving for Millwall on a free transfer in 2014.

He’s led the life of a journeyman footballer ever since currently plays non-league football for Gosport Borough. He has won 15 international caps for Guyana, having represented England up to u21 level.

Harvey Elliott made history when making his Premier League debut against Wolves in 2018, though it was not the first time he had entered the record books. He made his debut for Fulham against Millwall in the League Cup earlier on in the 2018/19 season at the age of 15 years, 5 months and 21 days! He beat Jordan Ibe’s record in that competition by three months.

He made just one further league appearance for Fulham, before a move to Liverpool in 2019. Elliott has since made 29 appearances, scoring twice, and had a successful loan spell at Blackburn Rovers during the 2020/21 campaign.

Jurgen Klopp is keen to integrate the midfielder into his plans on a full-time basis with Elliott viewed as a talent who could become a key figure at Anfield in the near future.

Ethan Nwaneri is the new record holder after making his debut for Arsenal this weekend, becoming the first under 16 player to feature in the Premier League.

The midfielder came on in the closing stages of Arsenal’s 3-0 win at Brentford and in the process became the youngest player to have ever featured in England’s top flight, dating back to 1888!

Nwaneri was not even born when the Emirates Stadium was opened in 2006, but Mikel Arteta had no hesitation in rewarded the academy prospect with senior minutes.

Ethan Nwaneri becomes the youngest player ever to play in the Premier League at 15 years and 181 days old 🤯 pic.twitter.com/pQtBmT6SSE

“He has trained a couple of times with us and I had a feeling yesterday that if the opportunity came I would do it,” Arteta said post-match, as per the Guardian.

“I think it sends a strong message about who we are as a club. I told him yesterday he would be with us and he had to be ready. He is ready. When he went on I said: ‘Congratulations and enjoy it.’

“We want to give opportunities. When there is talent and personality and when players love what they do, and when they have no fear, the doors are open for them to explore where they can go.”