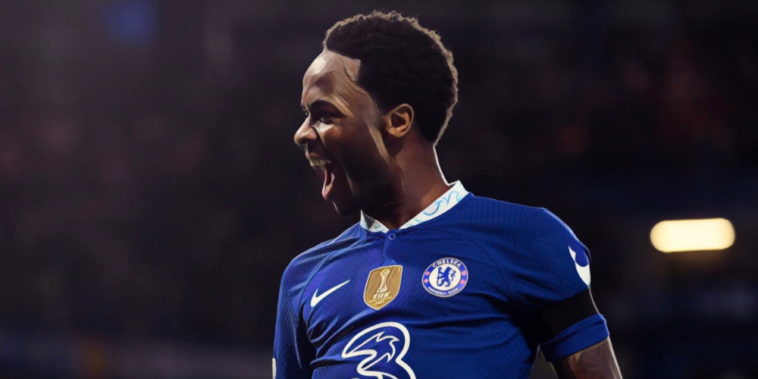 Raheem Sterling celebrated a landmark during Chelsea’s 1-1 draw with Red Bull Salzburg in the Champions League on Wednesday evening, as the forward registered his 250th goal involvement in club football.

Sterling opened the scoring at Stamford Bridge to record the 250th goal contribution of his club career and following his milestone moment we’ve broke down his record at each of his sides.

Sterling’s breakthrough came in the colours of Liverpool, who secured his signing from Queens Park Rangers as a teenager. After a string of impressive performances for the club’s academy side, he became the Reds third-youngest player when making his debut against Wigan in March 2012, aged 17 years and 107 days.

His first goal came against Reading in October, one which made him the second-youngest goalscorer for Liverpool, behind Michael Owen, at that time.

Sterling grew in confidence and influence across his three seasons as a regular at Anfield, with the 2013/14 campaign proving a breakthrough season. He scored nine league goals and provided a further five assists for the Reds, forming part of an exciting forward line alongside Daniel Sturridge and Luis Suarez as Brendan Rodgers’ side narrowly missed out on the Premier League title.

Sterling provided 14 Premier League goal involvements (7G / 7A) in 2014/15, his final season at Liverpool, before a £49m move to Manchester City in search of silverware.

After requesting to leave Liverpool, Sterling signed for Manchester City in the summer of 2015. He became the second-most expensive British footballer – behind Gareth Bale – at that time with Manuel Pellegrini hailing the new arrival as a ‘young player with outstanding ability.’

Sterling reached double figures for goals across his first two seasons at the Etihad, before his development truly accelerated following a period of tutelage under Pep Guardiola.

Sterling reached 20 goals in all competitions for the first time in 2017/18, as City were crowned Premier League champions with a divisional record of 100 points.

The following season he was named as the FWA Footballer of the Year and PFA Young Player of the Year, after a 25-goal campaign helped City to English football’s first domestic treble. He also recorded 17 assists across all competitions, the highest total of his career to date.

Sterling has scored five Premier League hat-tricks, with only eight players having ever scored more. His haul of five is level with the likes of Ian Wright, Andy Cole, Ruud van Nistelrooy and Robin van Persie.

The most prolific campaign of Sterling’s career in terms of goals came in 2019/20, as he struck 32 in all competitions. In total, he provided 227 goal contributions in 339 appearances for City, during a decorated career that delivered ten major honours.

Sterling’s role reduced during the latter period of his career at City, a situation which saw the England international seek an exit from the Etihad.

Chelsea made their move to sign Sterling in a £45m deal during the summer, as the west Londoners looked to increase their goal threat. The 27-year-old has made an immediate impact at Stamford Bridge, having provided five goal contributions in eight appearances.

He opened his goalscoring account for Chelsea with a brace in a 2-1 win over Leicester in August and has since netted further goals against Southampton and Red Bull Salzburg.