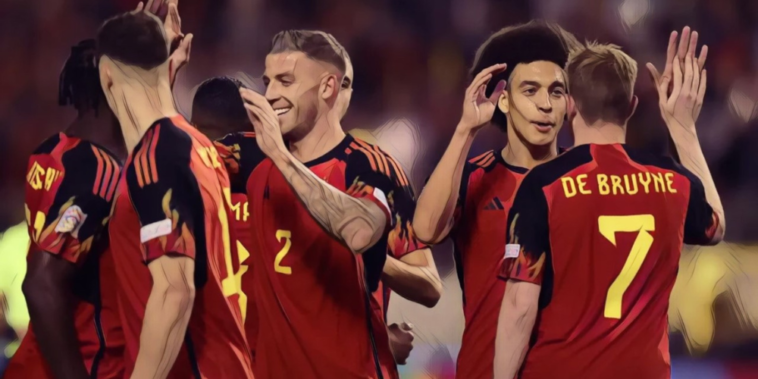 Ahead of the tournament we’ve previewed each of the competing sides, here are the nations in Group F – Belgium, Croatia, Canada and Morocco.

Belgium are ranked as the second best side in the world according to FIFA, though there is no doubt a sense that the nation’s Golden Generation has passed without success.

Defensive stalwarts Vincent Kompany, Jan Vertonghen and Toby Alderweireld are either gone or ageing, while Eden Hazard’s decline in fortunes at Real Madrid has been a sad tale. Hazard won the Silver Ball in Russia four years ago, but has scored just four league goals since swapping Chelsea for Spain in 2019.

This season he has totalled just 98 minutes across three league appearances and fitness concerns over Romelu Lukaku mean there is an over-reliance on Kevin De Bruyne heading into the tournament. De Bruyne has a genuine argument as Europe’s most influential footballer right now and been involved in a goal every 94.5 minutes for Manchester City in the Premier League this season.

Thibaut Courtois is a formidable presence behind a defence that contains a mix of ageing names and unproven talent, while Jeremy Doku, Amadou Onana and Charles De Ketelaere provide freshness to the squad. Much will depend on Lukaku however, who has scored a staggering 68 goals in 102 international appearances. He has featured just once since August for Inter Milan due to fitness problems.

Croatia reached the final in Russia four years ago and will be quietly confident of another successful tournament despite mass changes from that ageing squad.

Zlatko Dalic’s side impressed to top their Nations League group, winning five and drawing one of their fixtures in a group that contained world champions France, Euro 2020 semi-finalists Denmark and Austria.

Midfield is the strength of this side with the Croatians still orchestrated by the evergreen Luka Modric. Winner of the Golden Ball at the previous World Cup, he remains a metronomic figure for club and country, having starred as Real Madrid won the Champions League last season.

37-year-old Luka Modrić is heading to his fourth World Cup after being confirmed in the Croatia squad 🍷 pic.twitter.com/LrO5Dn2UXT

Alongside Modric are Mateo Kovacic and Marcelo Brozovic, two footballers of utmost importance but who rarely claim the headlines. Dominik Livaković has replaced Danijel Subašić as number one, while Josip Sutalo, Josko Gvardiol and Borna Sosa have refreshed the backline.

It will be fascinating to see how Gvardiol handles football’s biggest stage, with the RB Leipzig centre-back among the most in-demand young talents in European football.

Canada have reached the World Cup for just the second time, ending a 36-year wait after topping CONCACAF qualifying ahead of Mexico and the United States.

John Herdman’s side have been handed a tough draw but will hope to spring a surprise in Qatar. Their team is one blessed with pace, with Alphonso Davies the star name among their ranks. Davies has emerged as one of the most exciting full-backs in world football at Bayern Munich, where he has won four Bundesliga titles and the Champions League among his honours.

A kid born in a refugee camp wasn’t supposed to make it! But here we are GOING TO THE WORLD CUP. Don’t let no one tell you that your dreams are unrealistic. KEEP DREAMING, KEEP ACHIEVING! pic.twitter.com/GT4hjz4ebO

The 22-year-old’s electric speed has earned him the nickname ‘Road Runner’, though his pace is utilised in a more advanced position on the left for Canada. Elsewhere, Stephen Eustáquio has impressed for a Porto team who topped their Champions League group and provides class and composure at the base of the midfield. Club Brugge’s Cyle Larin and Lille’s Jonathan David also shone in qualification, finishing as the section’s top two scorers with 22 goals combined.

David has nine goals in 15 league appearances for Lille this season and has been linked with the Premier League in recent windows.

Morocco have reached a second successive World Cup, though the current side looks a lot different to the team who competed in 2018.

The likes of Medhi Benatia and Mbark Boussoufa have moved on, with a younger generation – some of which were included in Russia – having developed into the key figures in the side. Achraf Hakimi is the leading light and one of the best full-backs in world football, while the returns of Noussair Mazraoui and Hakim Ziyech after a fall-out with previous manager Vahid Halilhodzic are a welcome injection of top-level talent.

🇲🇦✔️@AchrafHakimi has been called up by the coach of Morocco to participate in the FIFA World Cup! 👏 pic.twitter.com/KmYRfp6t4o

In that trio and Sevilla pair Yassine Bounou and Youssef En-Nesyri, there is a core of Champions League regulars who will be eyeing an upset and group stage progress. Morocco reached the last eight at the AFCON earlier this year and qualified for the World Cup in comfortable fashion, topping their group with six straight wins before defeating DR Congo 5-2 on aggregate in a playoff.

The limited preparation time of new coach Walid Regragui is a concern, but the nation’s first Moroccan coach since 2016 has success on his résumé including a league title in Qatar and the African Champions League.