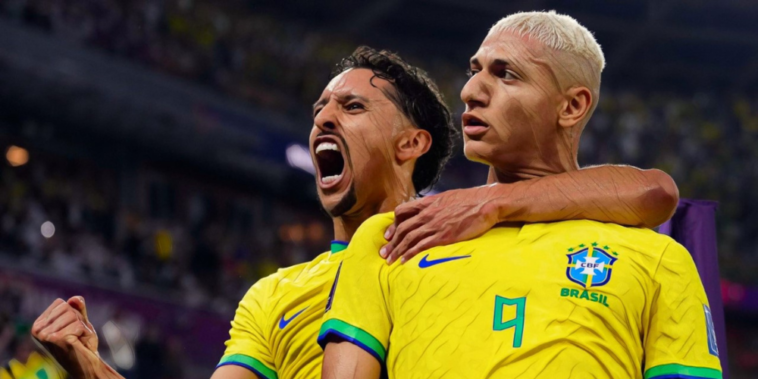 Our World Cup awards honour the best – and worst – of the football action from the Round of 16 in Qatar.

The first north African team to reach the World Cup quarter-finals have done so in style, topping a tough group containing Belgium and Croatia before eliminating 2010 winners Spain in the last 16.

Morocco’s resolute backline shone once again in a game of few clear-cut chances against Spain, with the two teams unable to be separated across 120 minutes of action.

Penalties decided the outcome and after the Spanish spurned each of their efforts from the spot, it was left to the Madrid-born Achraf Hakimi to score the winner in ice-cold fashion.

Hakimi has underlined his status as one of the world’s finest full-backs in Qatar, with the Paris Saint-Germain star showing incredible composure to panenka the decisive penalty.

Born in Madrid he knocks Spain out!! 🇲🇦🇪🇸

Achraf Hakimi wins the penalty shoot-out with a panenka to see Spain out of the competition! 😲#ITVFootball | #FIFAWorldCup pic.twitter.com/QWWynN6821

As has been the case in earlier games, Hakimi raced to celebrate with his family in the stands. It was another touching moment as the 24-year-old embraced his mother in the crowd, having knocked out the nation of his birth to make history with Morocco.

Fernando Santos made a brave call ahead of Portugal’s last-16 clash with Switzerland, dropping the nation’s talisman to the bench.

Santos had said he was unhappy with Cristiano Ronaldo’s reaction to being substituted in the previous game and left out international football’s record goalscorer. It proved an inspired decision.

In the absence of Ronaldo, the Portuguese thrived. Joao Felix floated freely. Pepe rolled back the years. Goncalo Ramos – Ronaldo’s replacement for the evening – was simply outstanding.

Ramos became the youngest player since Pelé to score a knockout round World Cup hat-trick in a statement performance, celebrating his first international start with a brilliant treble against the Swiss.

Ramos began the rout with a rasping drive inside Yann Sommer’s near post, before adding second after turning in Diogo Dalot’s inviting low cross. He turned provider after setting up Raphael Guerriero and scored his third – and Portugal’s fifth – with a clever chip when through on goal.

It was an excellent all-round performance from the 21-year-old, who has followed up a breakthrough season at Benfica with a star performance on the biggest of stages. Ronaldo might just have to get used to a place on the bench, as Portugal take on Morocco in the last eight.

Brazil brought back fond memories of their free-flowing sides of past tournaments this week, with a near-perfect performance to thrash South Korea 4-1.

There was swagger and celebrations from the Samba stars, who cut apart the Koreans with ease. The highlight of the win was a brilliant team goal finished off in fine fashion by Richarlison.

Having already scored a Goal of the Tournament contender in the group stage, Richarlison repeated the feat with this effort, one which saw the Tottenham forward start and finish a fluid footballing move.

How good is Richarlison for this Brazil side?! 😲#ITVFootball | #FIFAWorldCup pic.twitter.com/IbJbKku3j2

Not one, not two, but three penalty saves from Dominik Livakovic ensured Croatia’s campaign in Qatar continued this week.

The 2018 runners-up were pushed all the way by Japan, with the lottery of the shootout deciding the outcome.

Livakovic rose to the occasion to stop three of Japan’s four efforts, becoming just the third goalkeeper – after Portugal’s Ricardo in 2006 and Croatia’s Danijel Subasic in 2018 – to save three spot-kicks in one shootout.

This video of Modric motivating Livakovic hits different now after the game pic.twitter.com/PfrB4s6w6Z

The France forward is having a tournament to remember with five goals in Qatar, leading the race for the Golden Boot as he bids to inspire Les Bleus to back-to-back World Cup successes.

Mbappe’s second goal in the 3-1 win against Poland was the 250th of his professional career, reaching that landmark in less games than both Cristiano Ronaldo and Lionel Messi.

The boy’s a bit special.

250 – Kylian Mbappé’s second goal against Poland on Sunday was the 250th of his professional career (360th game), reaching this tally in 150 games fewer than Cristiano Ronaldo (510) and 19 games fewer than Lionel Messi (379). Statement. pic.twitter.com/77e6yGUKBN

Spain were the major casualties of the Round of 16, crashing out to Morocco via a penalty shootout.

La Roja have now lost more penalty shootouts (4) than any other nation in World Cup history, with the lottery of penalties a result of their ponderous play against the north Africans. Spain, as expected, dominated the possession with 77% of the ball, but Luis Enrique’s side were unable to turn that into chance creation and mustered just six shots – with just one hitting the target.

Luis Enrique told his Spain side to practice 1,000 penalties before the World Cup.

They scored zero in their shootout with Morocco 🤐 pic.twitter.com/v5ohTgF00n

It is the lowest number of shots on target that Spain have recorded since the data was first collected in 1966. Spain continue to produce elite midfielders, but without cutting edge there will be no success at the highest level.

The Spanish have now failed to progress past the last 16 of a World Cup in three attempts since being crowned world champions in 2010.