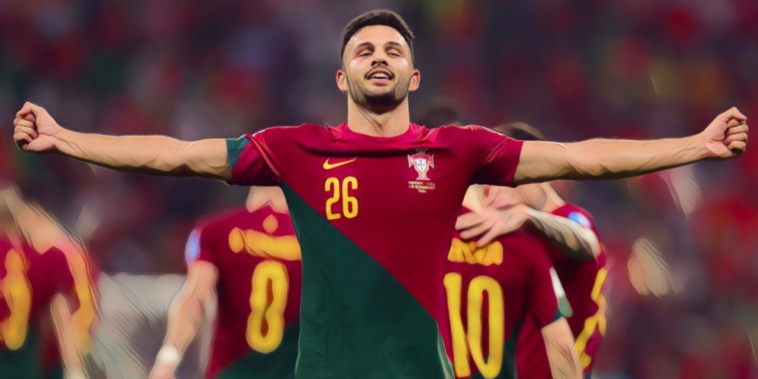 Goncalo Ramos has catapulted himself into the headlines with a World Cup hat-trick, scoring three goals on his first international start to fire Portugal into the quarter-finals.

The pre-game talk centred around the decision of Fernando Santos to drop Cristiano Ronaldo, but ended with no doubt over the decision after Ramos produced an explosive centre-forward performance against Switzerland.

Ronaldo’s reaction to being substituted in the previous game had irritated Santos, who chose to leave out Portugal’s record goalscorer in favour of Ramos. The 21-year-old had never previously started a game for the national side and had just 35 minutes of international experience, but took his chance in sublime fashion.

Ramos’ opportunity has come after a breakthrough season at Benfica during the opening months of the campaign. A product of the Lisbon side’s notorious academy system, Ramos shot to prominence with a brace off the bench on his senior debut for the side in 2020.

His quick-fire double against Desportivo das Aves came after being introduced in the 85th-minute and demonstrated that the teenager was capable of replicating his prolific exploits at youth level in the senior side. Ramos had starred as Benfica reached the final of the UEFA Youth League in 2019/20, ending the campaign with a tournament-leading eight goals.

The following season, a run of 11 goals in 12 appearances for Benfica B earned Ramos his senior chance with the forward handed a handful of opportunities in the Primeira Liga.

He earned a more regular role in 2021/22, a season which saw the forward score seven goals in 17 league starts in Portugal’s top division. The academy product had struggled for regular minutes due to the presence of Darwin Nunez and Roman Yaremchuk over the season’s opening months and agitated for an exit in January as he sought consistent opportunities.

Jorge Jesus’ exit as head coach and the arrival of Nélson Veríssimo as interim manager persuaded Ramos to remain, having worked under the latter with the Benfica’s B side. A run of goals over the second half of the season saw permanent successor Roger Schmidt decide to place his faith in Ramos for the forthcoming campaign.

Nunez’s high-profile sale to Liverpool and the exit of Yaremchuk to Club Brugge saw Ramos promoted to first-choice forward at The Estádio da Luz, a role he has revelled in to date.

Ramos leads the race for the Primeira Liga’s Golden Boot after scoring nine goals in just 11 league fixtures. He began the campaign with a first senior hat-trick as Benfica thrashed FC Midtjylland in the UEFA Champions League’s third qualifying round, before he impressed as the focal point of Schmidt’s side who are unbeaten across 27 games in all competitions this season.

Only Jamal Musiala can match Ramos’ nine league goals among players aged 21 and under across Europe’s top five leagues and Portugal this season. Ramos’ improvement with regular minutes is clear in the underlying statistics, with his numbers for shots (3.7), fouls won (1.6) and aerial duels won (2.2) per game all increased from last season.

Crucially, his increased volume of shots has come with quality alongside quantity. Ramos shot accuracy of 48.48% is only fractionally up from last season’s (47.06%) in the Primeira Liga, but the improvement in his finishing is evidenced with a conversion rate of 27.27% – more than double the 13.73% he mustered in 2021/22.

Ramos’ goalscoring form caught the attention of Portugal manager Fernando Santos, who called up the forward for the first time in September 2022. A regular at youth level, he formed part of the teams that reached European Championship finals at U-19 (2019) and U-21 (2021) level.

Despite not making an appearance in September’s international break, he was included in Santos’ squad for the World Cup. A pre-World Cup friendly against Nigeria saw Ramos mark his senior debut with a goal and assist.

After two brief cameo appearances off the bench in the group stage, Ramos was thrust into the side for the last-16 clash with Switzerland. Ronaldo’s omission soon became an afterthought, as Ramos justified his inclusion with a centre-forward masterclass.

He opened the scoring in Portugal’s rout of the Swiss with a thumping left-footed drive, the power on the strike – coming off his weaker side – catching Yann Sommer out at his near post. Ramos added the second with a poacher’s effort, as he got across his marker to steer home Diogo Dalot’s cross at the near post.

Who saw that coming from Goncalo Ramos!! 🇵🇹

The 21-year-old only had 35 minutes of international experience before tonight… 👀#ITVFootball | #FIFAWorldCup pic.twitter.com/gll8GEBi2d

The 21-year-old turned provider after teeing up Raphaël Guerreiro for Portugal’s fourth, before adding the fifth himself with a composed chip over the onrushing goalkeeper to write his name into the record books.

He became the first player to score a hat-trick on his first World Cup start since Miroslav Klose in 2002, while it was the first knockout round treble at a World Cup since Tomáš Skuhravý in 1990.

Ramos also became the youngest player to score a World Cup hat-trick in 60 years, while he was the youngest to do so in a knockout round game since Pelé in the 1958 semi-finals.

Ronaldo’s replacement is now the talk of a nation, with his exploits in Qatar only set to increase his price-tag as Ramos is linked with becoming Benfica’s next big export. An exciting Portuguese generation clicked against the Swiss, with Ramos, Joao Felix and substitute Rafael Leao the stars of the next wave of talent.

Portugal had been solid if unspectacular during the World Cup’s group stage, but Ramos has reignited belief that Fernando Santos’ side can challenge to become champions.